A Pin Pops a Balloon

Kill a Mancubus with the Pistol.

You will encounter the first Mancubus after using the green teleport at the beginning of the level.

Kill 2 Cacodemons with one shot.

You can do it at the second switch with a skull. There will be two Cacodemons there. Lure them close to each other and the shoot from charged Gauss Cannon. You can also use BFG.

Get to the tomb and reclaim the Crucible 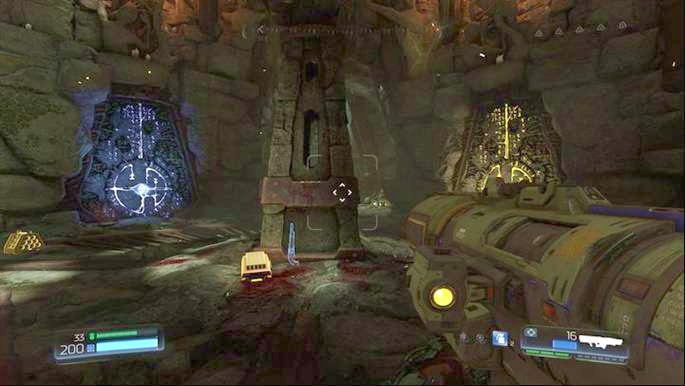 The level starts near the place with yellow and blue door. First jump down to the left and enter the green portal. 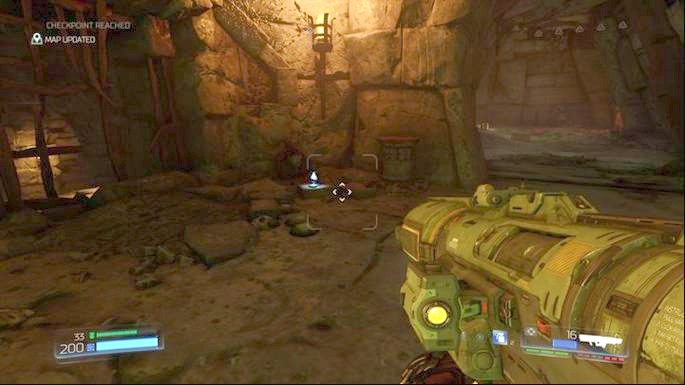 Pick up the first Data Log on the other side and then kill the demons that will appear there. 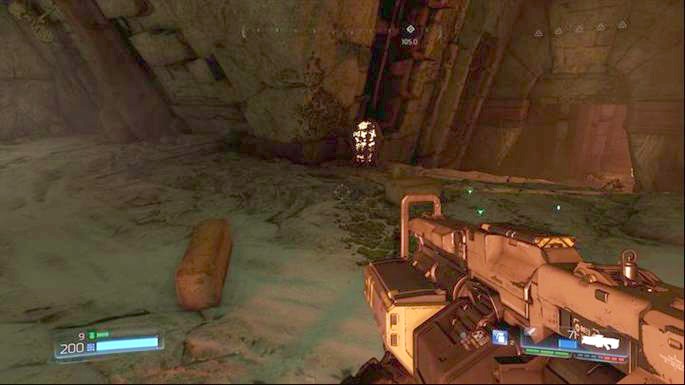 You can use the nearby barrel to kill some of them and complete part of the challenge. 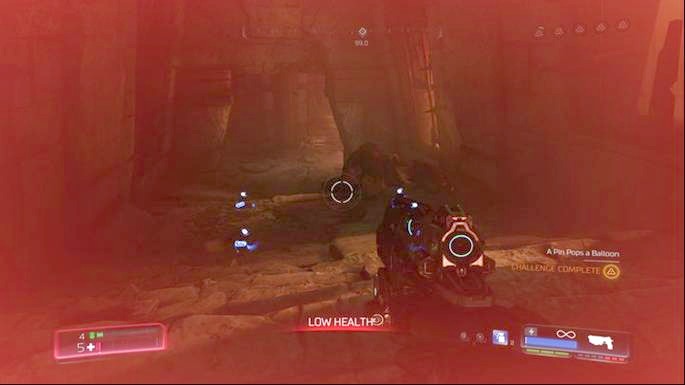 Finally, a Mancubus will appear. You should kill him with a pistol. This will allow you to obtain the second challenge. 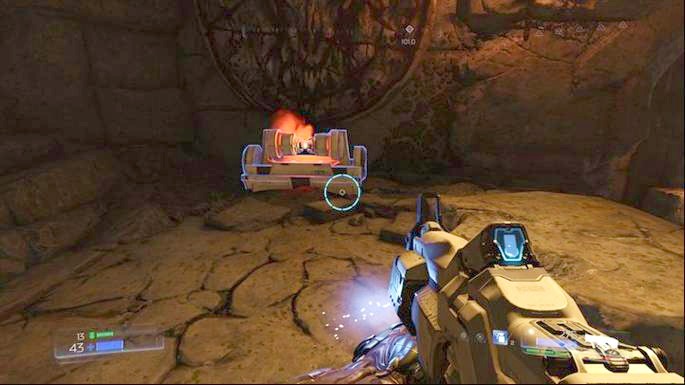 Turn left once the battle ends. At the top of the stairs there will be a Data Log in the form of an artifact and an Argent Cell. 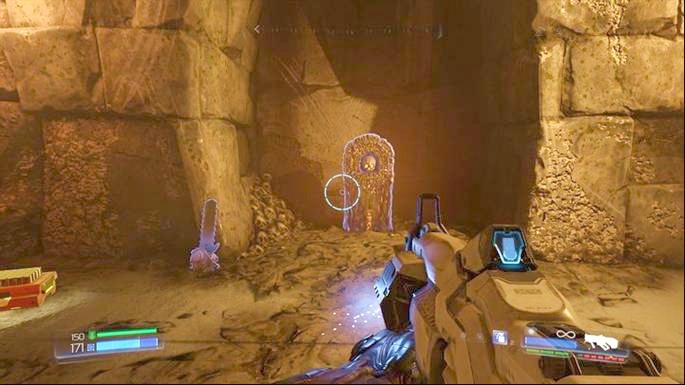 Now you can go back up, to the newly unlocked room with a red switch. Kill the nearby demons before you use it. 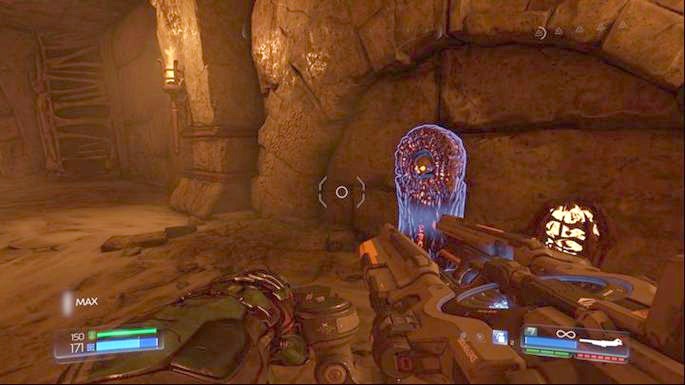 The switch will open the door below. There you will have another red skull to press and legions of beasts to defeat. It is a great place to complete the barrel challenge. 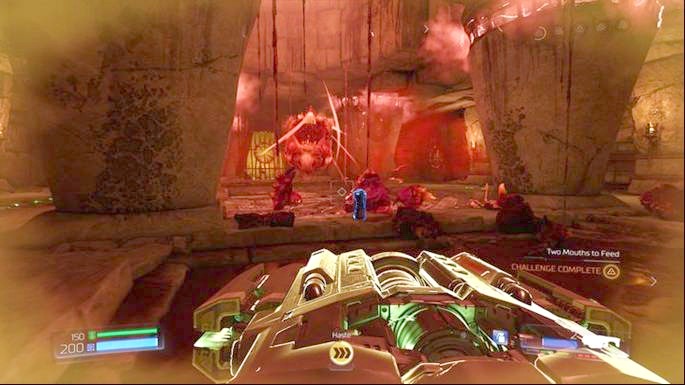 Once two Cacodemons appear, lure them close to each other and then shoot them with BFG. This will allow you to obtain the third and final challenge. 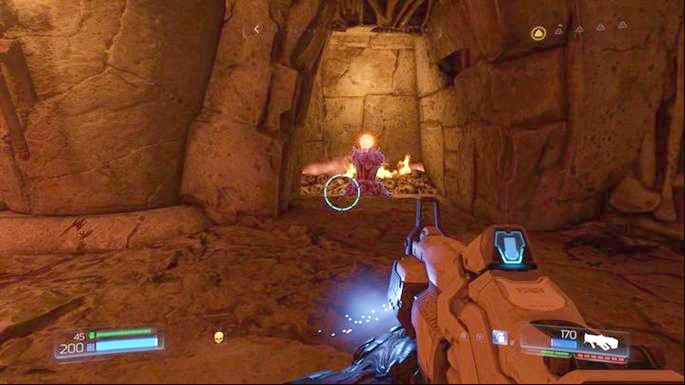 Pick up the skull after the death of the demons. Then use the Automap located in the niche on the right. 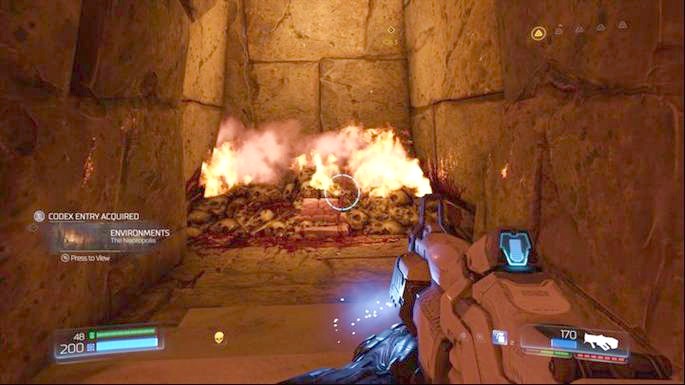 There is a green portal ahead of the skull. Turn the lever hidden on the right from it before you use it. 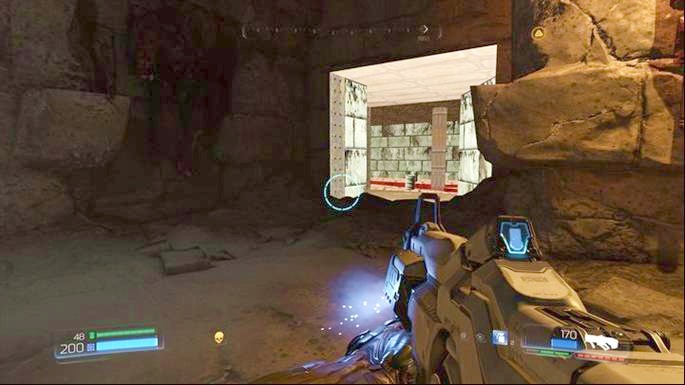 You will unlock a Classic Map. Entrance to it is located near the room with Argent Cell. 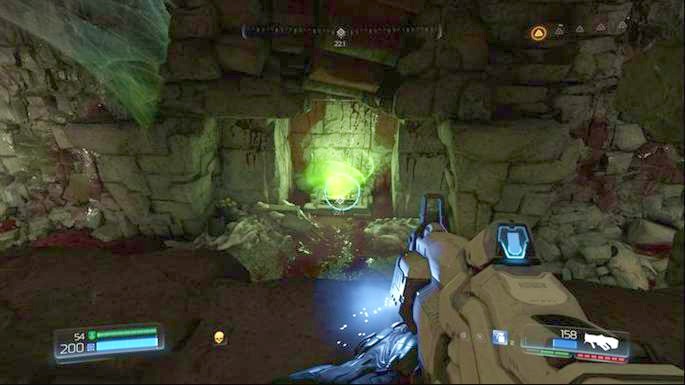 The previously mentioned teleport will take you to a room with yellow door. Use the switch behind the door and then use the transporter on the right. 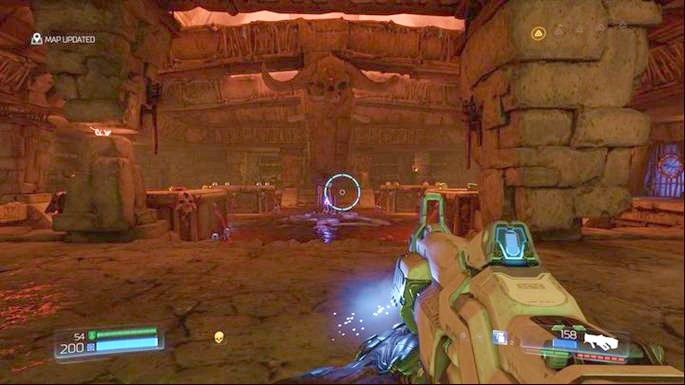 Kill all the appearing beasts once you are moved. Pick up the blue skull. You can move with it to the blue door and use the switch hidden behind it. Soon after that beasts will appear. 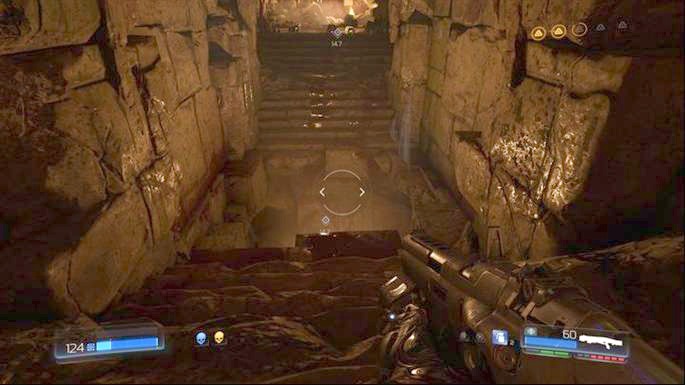 At the end you will face two Barons, so remember about keeping ammunition for stronger weapon. Once both creatures are dead, go to the very bottom and enter the hole that is located there. 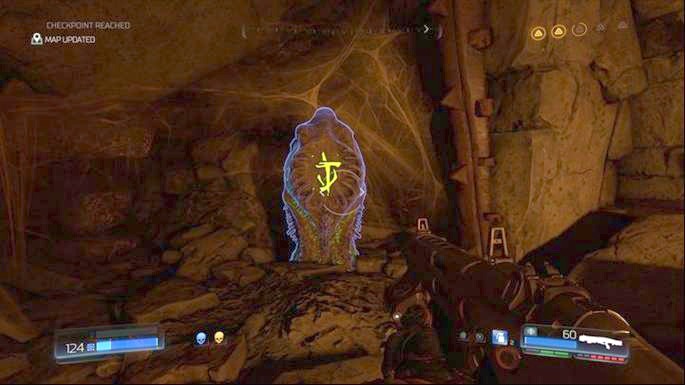 At the bottom you can use the Data Log in the form of an artifact and slightly further you can jump even lower. 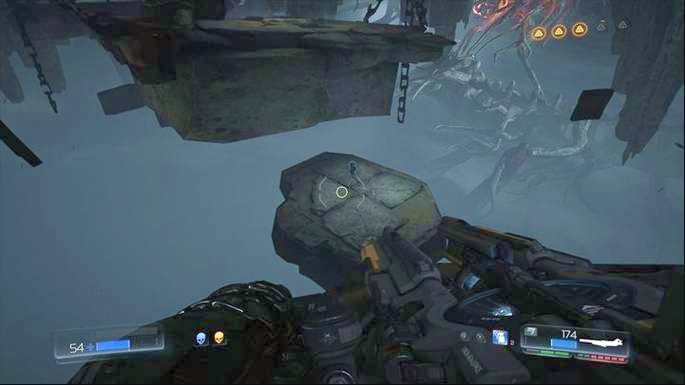 You will land on a rocky platform where two Cacodemons will attack you. Another collectible (Tealguy) is hidden under the third island. In order to get there you must jump from the fourth platform. 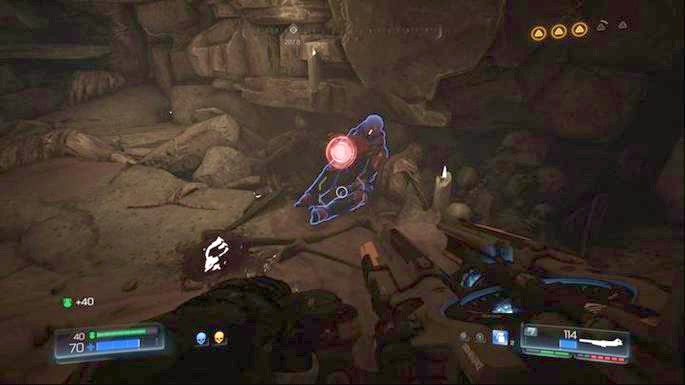 In the cave on the other side of the cliff you will encounter a Mancubus. Search the Elite guard lying under the wall once the beast is dead. 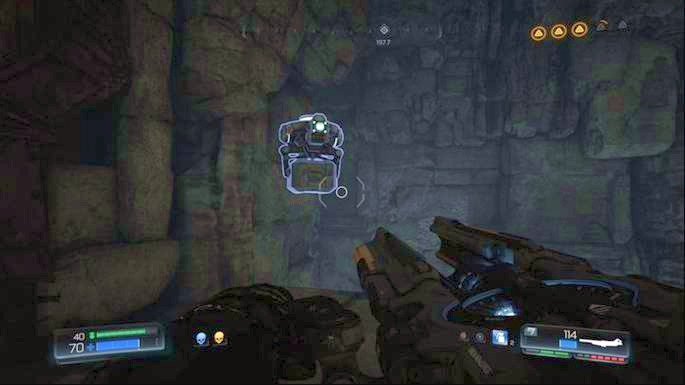 Slightly further there will be a Combat Assault Drone waiting for you. On the right from it a longer battle will start. During it you can pick up the Haste power-up lying above. 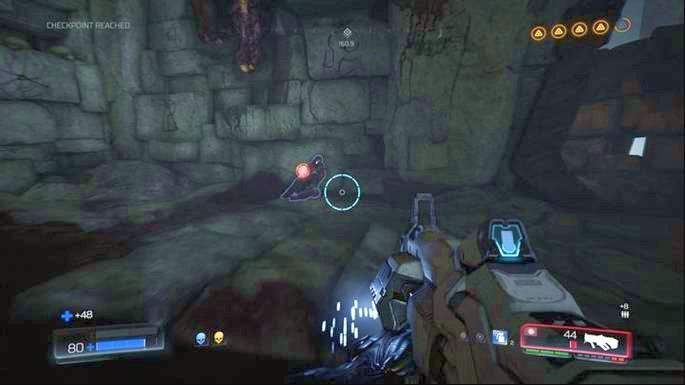 Go up the corridor once the last demon is dead and defeat other beasts. Just before leaving you will also find the last Elite Guard. 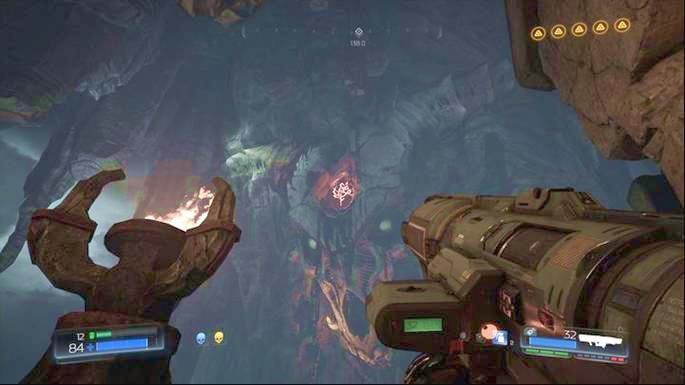 Look up to the right once you're outside. There you will see a big skull with a red rune on its forehead. 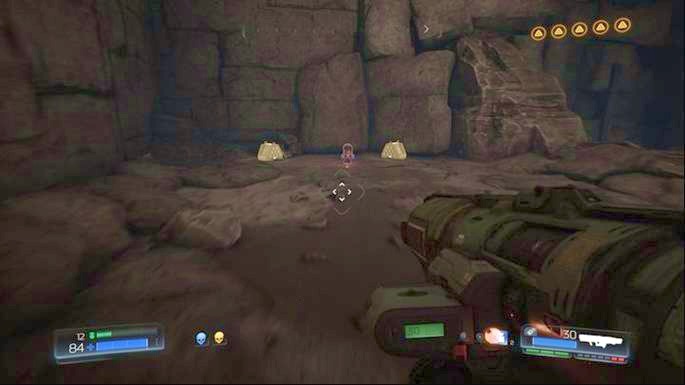 Shoot it with rocket and a chest with collectible (Hasmatguy) will fall from there. Slightly further you will be attacked by the last demons on this level. Then you can go to the end of the tunnel, pick up all the useful items and prepare for a boss fight.