Kill a Lost Soul with another Lost Soul.

In order to complete this challenge you must hit one skull with the Gauss Cannon when another is nearby. Two pairs of skulls can be found at the bridge at the beginning of the level.

Perform a "Death from Above" Glory Kill on a Baron of Hell (attack from above).

You can do it with the help of Quad Damage after using the first green teleport. 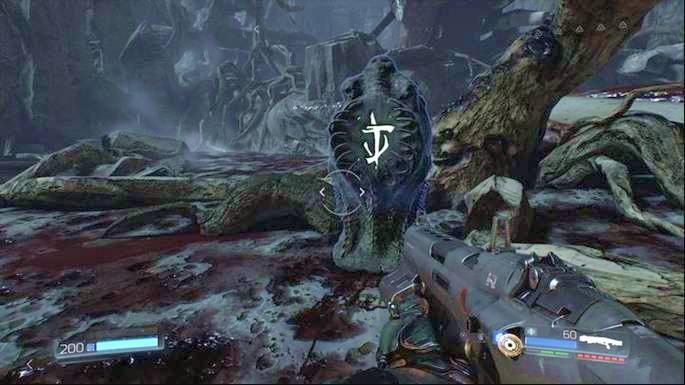 Keep going ahead after the level starts. On your way you can check the Data Log on the right. 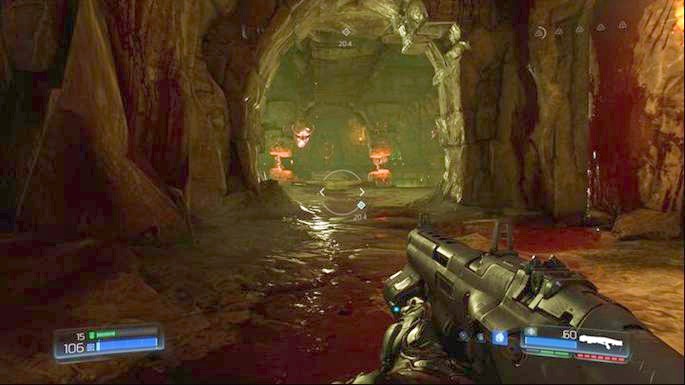 There will be a hole at the end of the tunnel. You must jump inside. Below you will face a few demons. Climb upstairs after killing the last one. You will reach a short bridge. 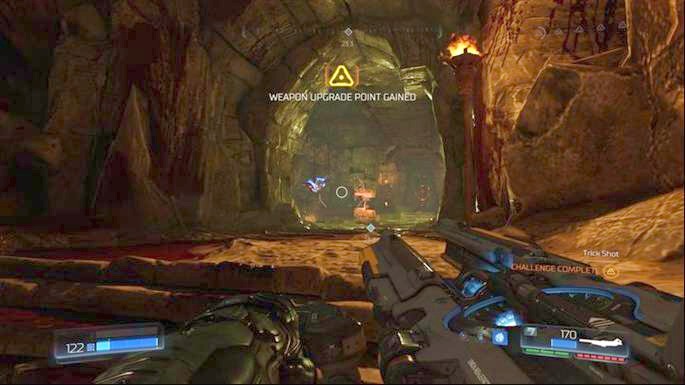 Four skulls will be flying from the left and from the right. Shoot one of them with Gauss Cannon. You will also blow up the second one and thus complete the challenge by doing so. 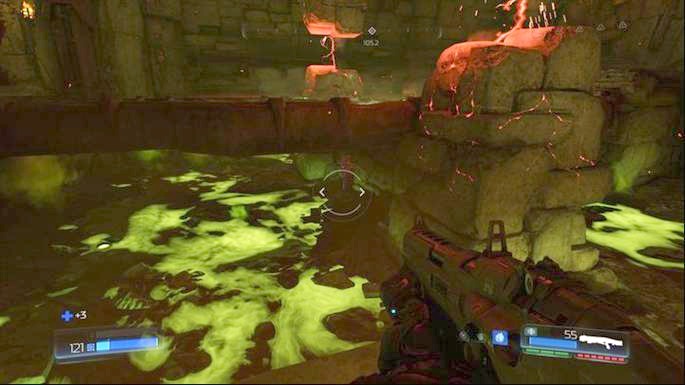 Jump down on the platform on the right after you eliminate all beasts. Look under the bridge. There will be a red switch there. You must quickly run towards it and use it because the green substance is dealing damage to you. 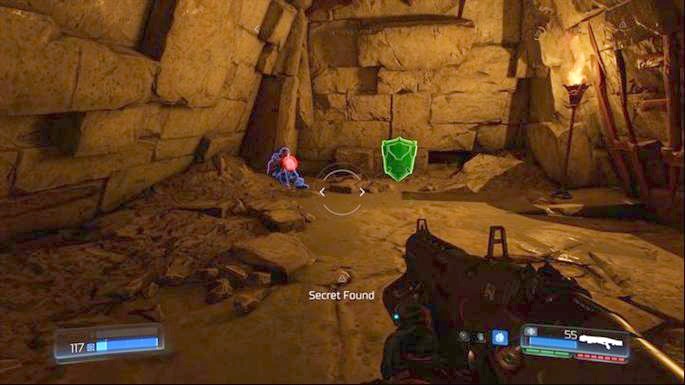 The switch will open entrance to the tunnel below on the right. Inside there is armor and Elite Guard hidden. 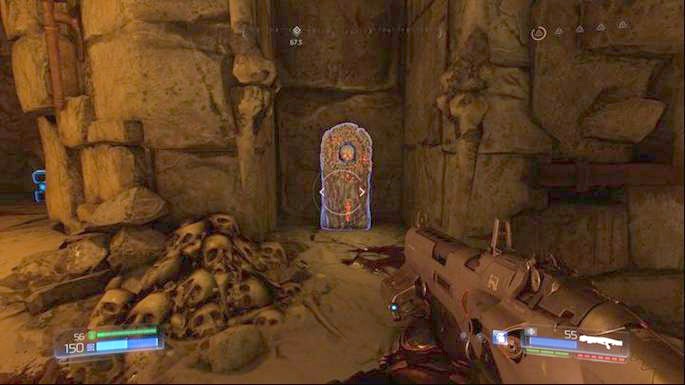 Further road leads to the corridor on the left. There you will face some more demons. Once all enemies are dead, go to the right wing and use the switch hidden in the left wall. It will open passage to Combat Support Drone behind your back. 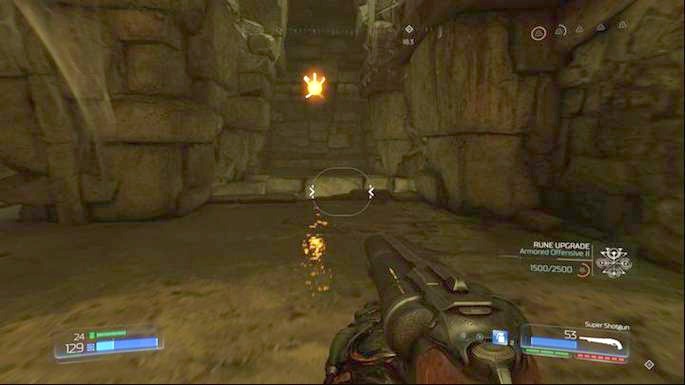 Go to the left after selecting an upgrade. New demons will attack you in the large chamber. In order to make fighting them easier, pick up the Haste that is located above. You should use it to complete one of the challenges. The enemies won't be too strong, fighting them shouldn't take long. 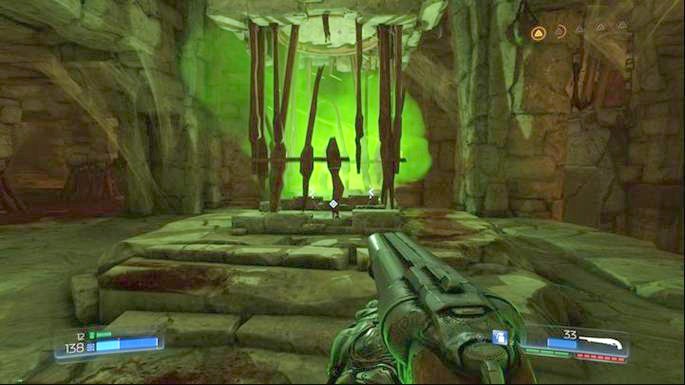 Enter the green portal in the middle once it is over. The portal will take you to even larger room where the battle will be much harder. On first floor you will find the Quad Damage power-up. It will prove to be especially useful when fighting Barons. Use it well in order to weaken the large monster and then perform an aerial Glory Kill on him. This will allow you to complete the third challenge. 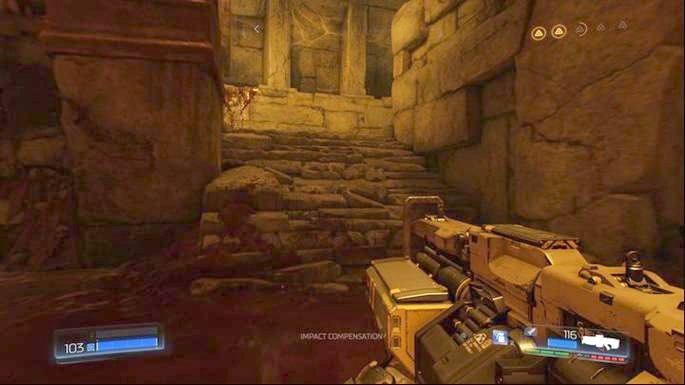 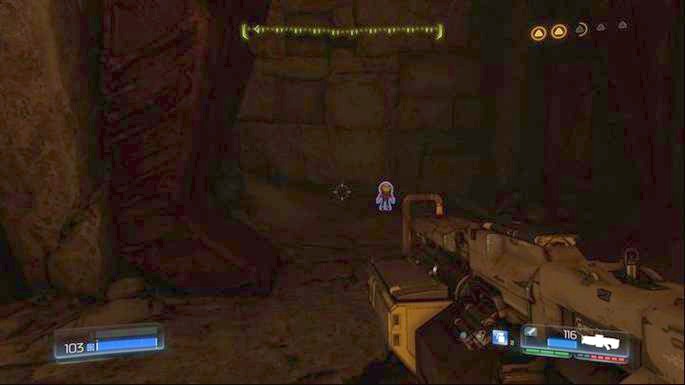 You will reach a niche in which a collectible (Keenguy) was hidden. 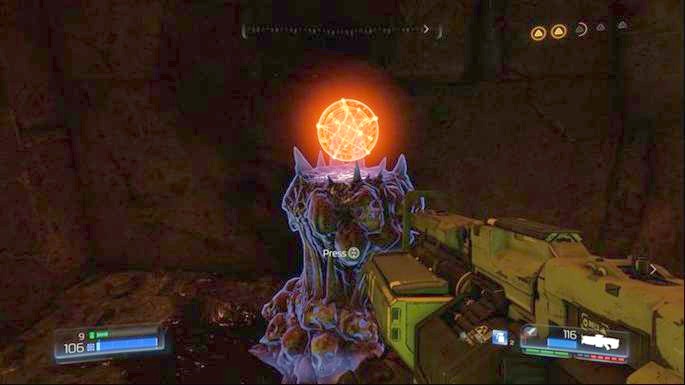 Further path leads through the teleport in the middle. Use the Automap on the other side and then get rid of the enemies in the large chamber. 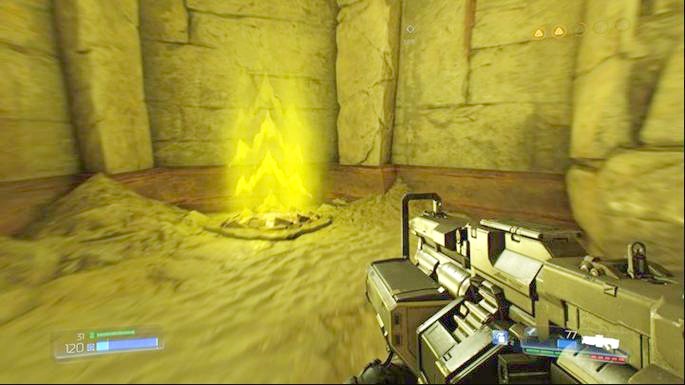 Enter inside once the beasts are dead and look for a door with red skulls. On the right from them there will be a launcher. 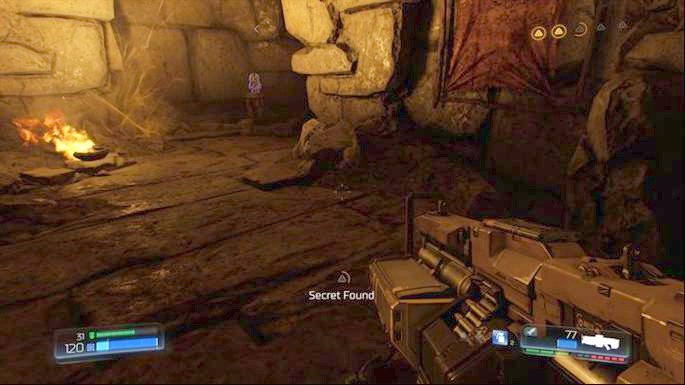 Use it, land one floor above and then jump to the other side of the room. In the corner you will find the second collectible (Silverguy). 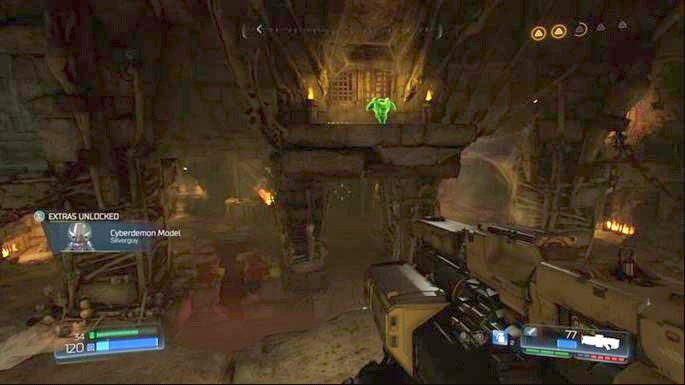 Jump to the green armor in the middle of the room in order to move on. 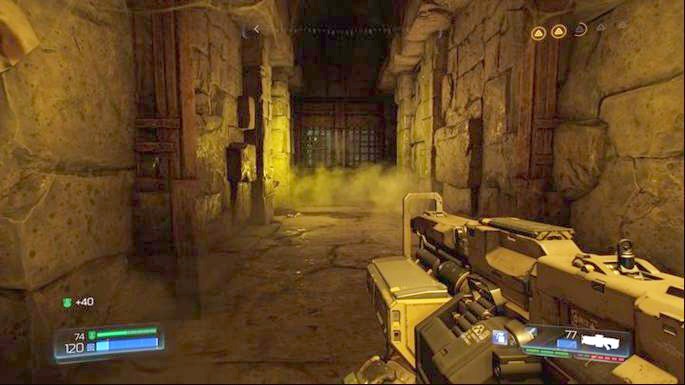 Behind it there will be a yellow skull. If you pick it up, the ceiling will start dropping at you. Luckily, after a moment a niche will appear in front of the skull - you can hide inside. Once everything is back to normal, turn right and jump down to the room with yellow door. Sadly, you can't open it for now. 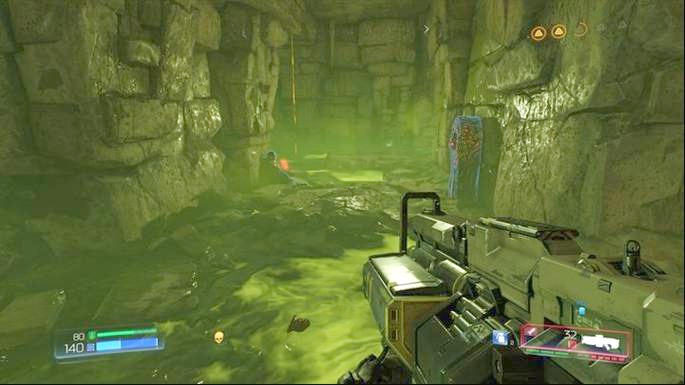 Instead of that, go to the left, to the chamber with green substance. Kill as many demons as possible while standing in the entrance and then go to the opposite end by jumping between the rock islands. You will avoid taking damage by doing so. There will be an Elite Guard and a red button at the end. Use the button. Two large demons will appear. In order to easily kill them you should pick up the Invulnerability power-up floating in the middle of the location. 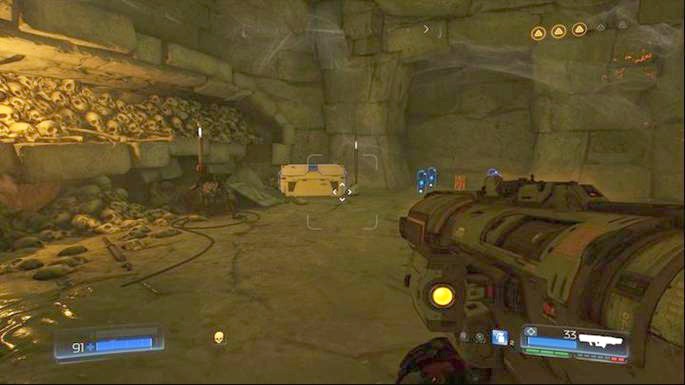 Enemies are also waiting for you in the next room. Kill them and then go to the chamber ahead. There you will find Argent Cell and Data Log. 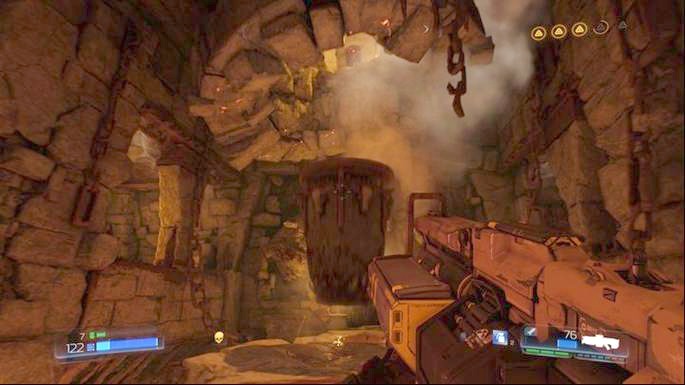 Further road leads through the nearby yellow door. Behind them you will see a red switch which will quickly rise and you will be attacked by demons. When fighting the beasts, watch out for the platform which sometimes lowers down - It can crush you. 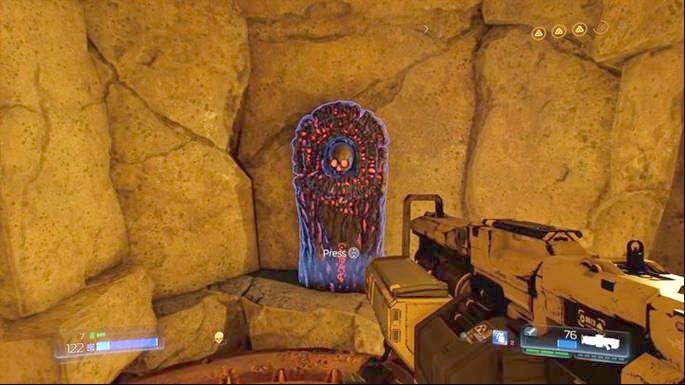 Jump on it once the battle is over and use the switch at the top. It will open door with red skulls below. 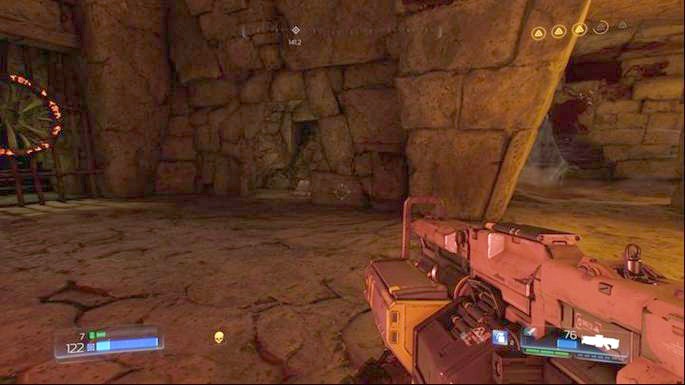 Before you go further, ride down the platform and use the lever ahead of the recently opened gate. 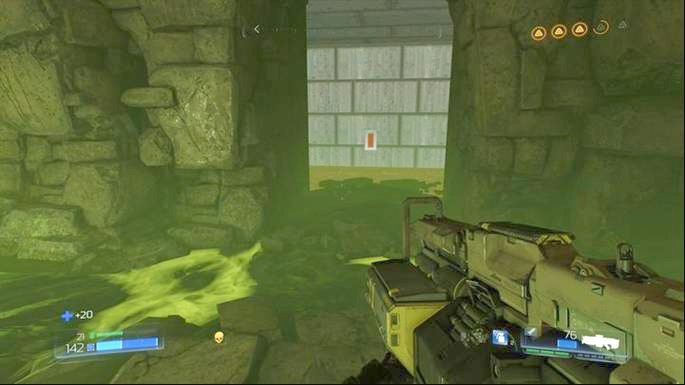 It will unlock a Classic Map in the chamber with green substance. Destroy the barrels in the circle inside the map and then turn left. 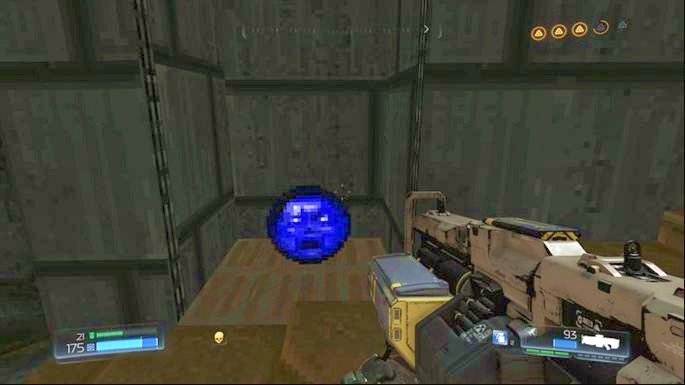 Search the wall on the left just before the end of the corridor. There will be a power-up hidden there. 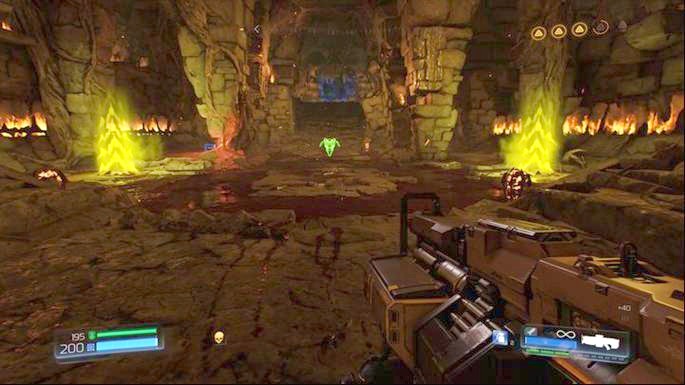 Now you can go through the door opened with the red switch. Behind it there is a chamber with a blue skull. If you pick it up and walk towards the exit, demons will start to appear. A Baron will attack you as the last. You can perform aerial Glory Kill on him if you haven't completed the challenge yet. 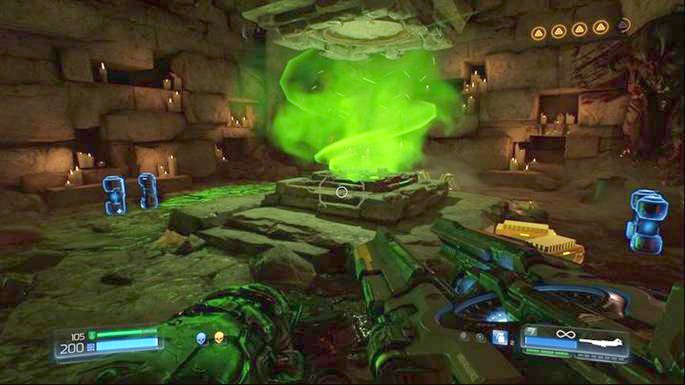 Use the green portal next to the exit after the battle and keep going ahead. 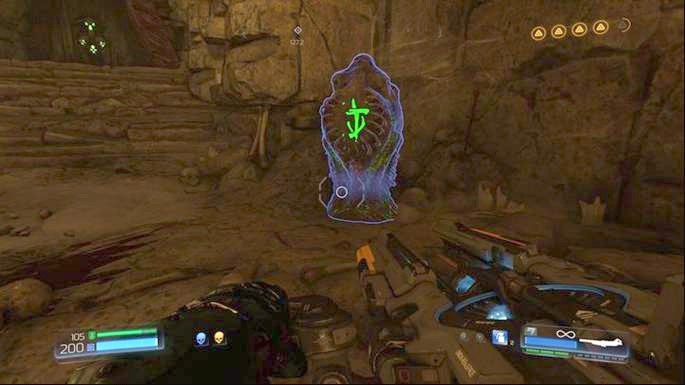 On the right side you will find a Data Log in the form of an artifact. On the left there will be a short tunnel with Mega Health at its end (secret). 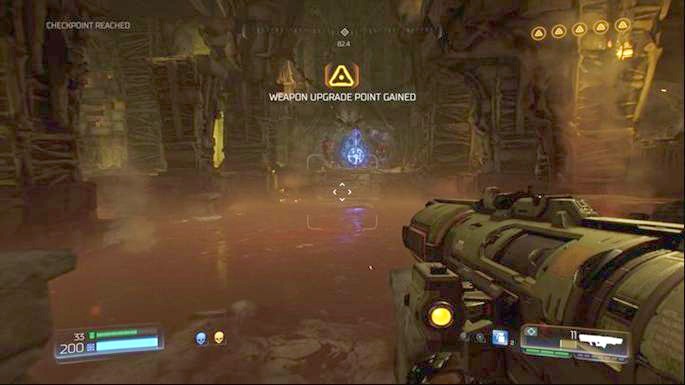 Behind the next door you will find a chamber with blue door. Before you can open it, first you must fight a group of demons. The berserk floating in the middle should be picked up by you when the first Summoner appears. Thanks to that you should easily defeat all the strongest beasts among which there will be the Baron as well. 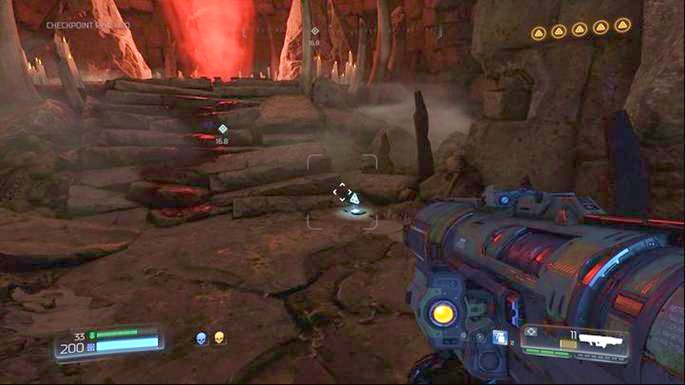 Open the blue gate after the battle. Pick up the last Data log behind it and finish the level.