Kill a Revenant while it is in mid-air.

Once every while the revenants start to flow and shoot you with rockets. Kill them then, preferably with homing missiles or Gauss Cannon.

Kill 5 demons with the Chainsaw.

The fastest way to get this achievement is by killing weak enemies with chainsaw - you will use less fuel and won't have to search it.

The location of all Data Logs can be found in the walkthrough and in the chapter with secrets.

Go to the security office 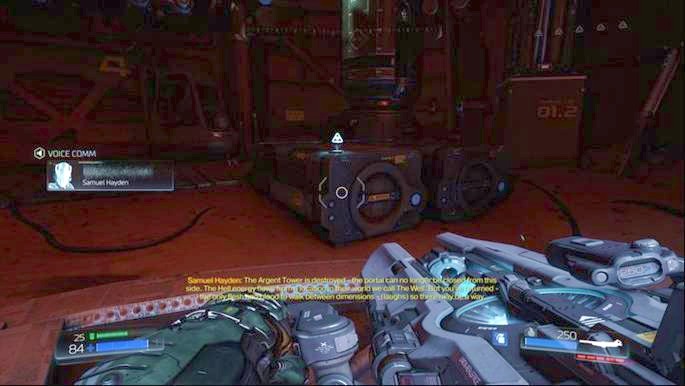 Pick up the Data Log lying near the place where the level starts. Then keep going ahead. Cacodemon will attack you soon. Kill it and then start climbing up the green-lighted platforms. 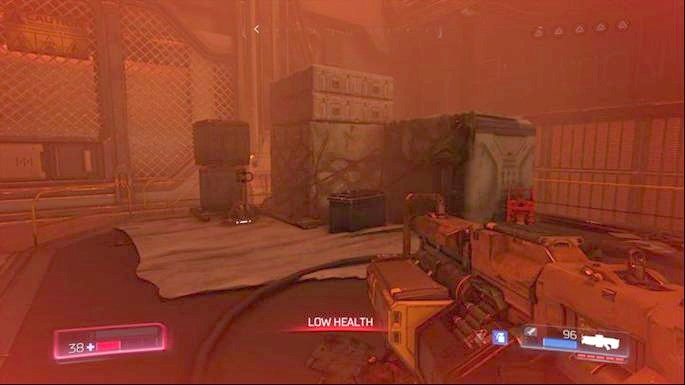 On one of the larger platforms you will see a few chests. 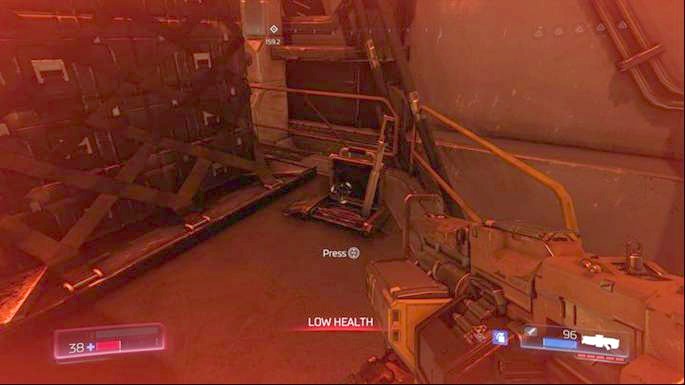 Walk around them and pull the lever hidden behind. 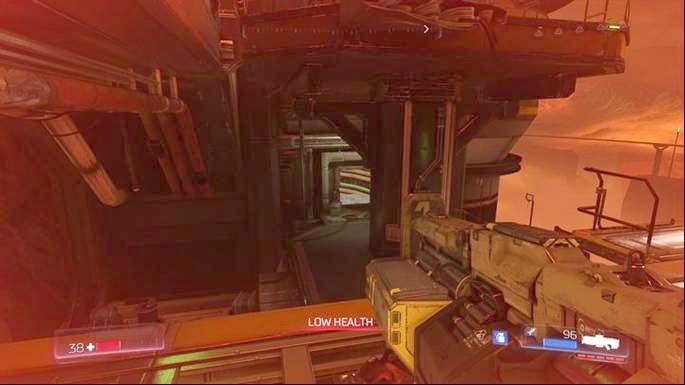 You will unlock a Classic Map which is located one floor below. 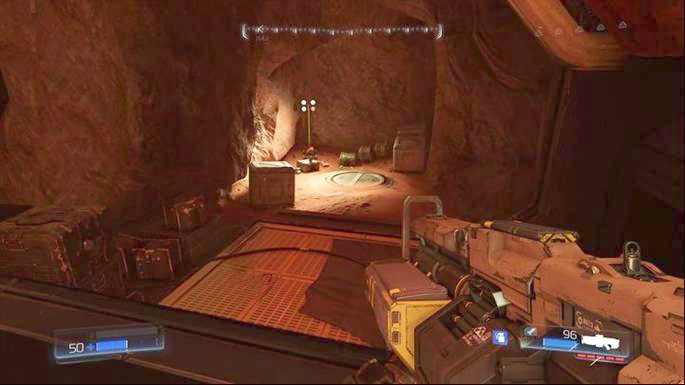 On the left from the entrance to the classic map there is another platform. The first collectible (RageGuy) is on it. 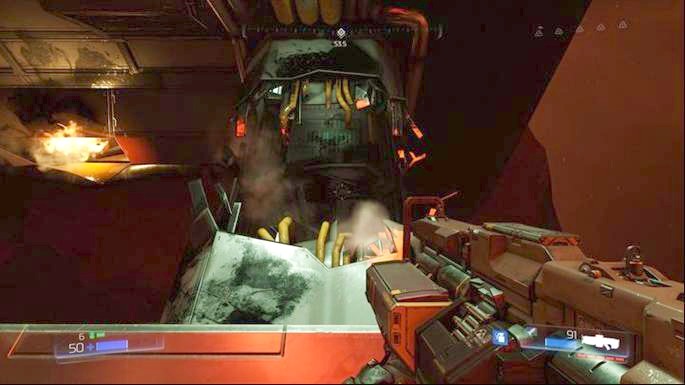 Keep going higher until you reach a wide gap. You must jump over it by using double jump. 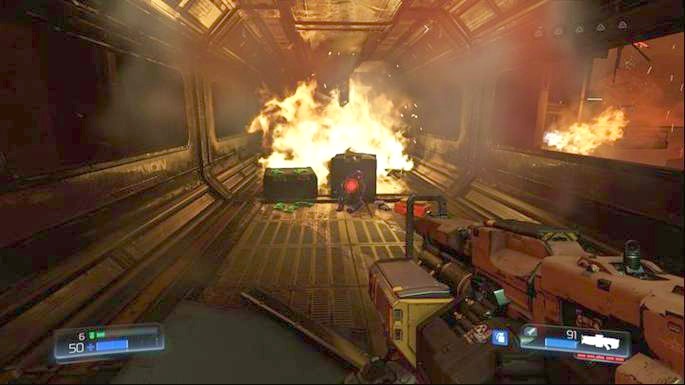 Walk forward and you will notice a ruined corridor below. Jump there, turn around and search the Elite Guard. 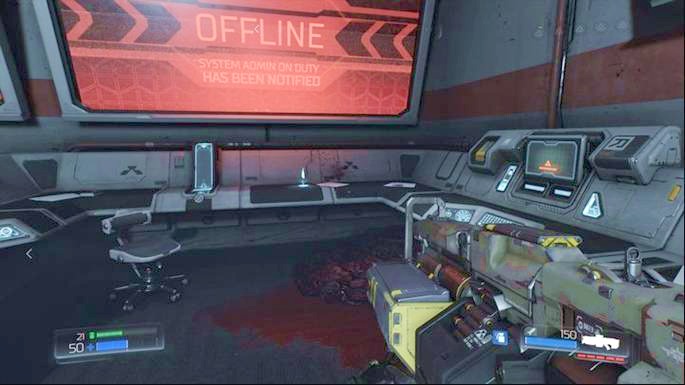 Slightly further there will be a room with Data Log lying in the corner. Use the computer in that room and you will receive a new objective. 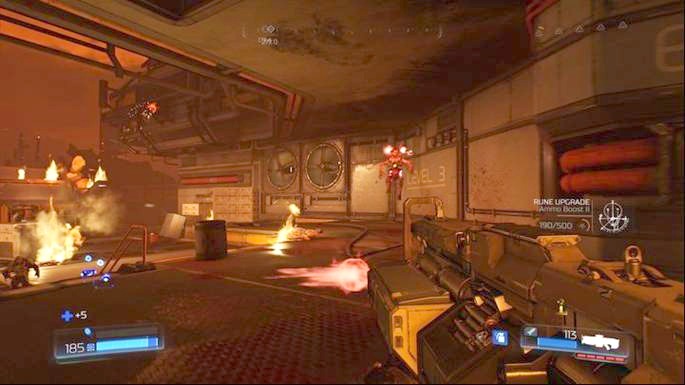 After listening to a short speech you must go forward. Unlock the nearby sluice by using the panel next to it. Further path will be filled with demons. You don't need to kill them all, but you should do it anyway in order to obtain weapon upgrade points. During the battles you will fight Revenants as well. Perform the challenge on one of them. The easiest way to do it is with the homing rocket launcher. First hold the lock-on button and then release it when the demon goes to the air. 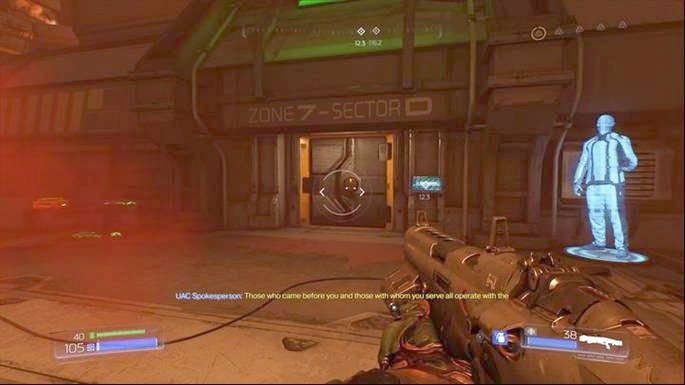 Go towards the door marked on the radar. 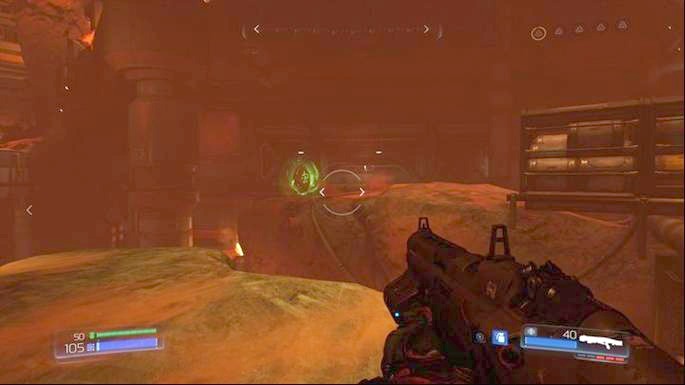 Go left before you open it. You will find the first Rune Trial - In-Flight Mobility. During it you must obtain 15 relics and reach the altar in limited time. For completing the task you will receive a rune that increases control during double jump. You will get an additional slot for runes as well. In order to complete the task you should keep watching ahead and jump between the artifacts by strafing to the side. 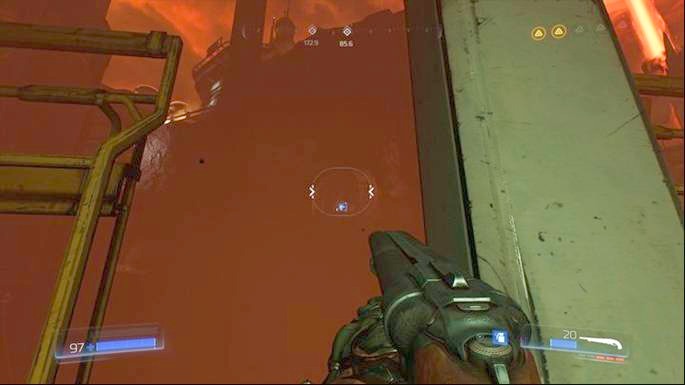 Turn around after completing the trial and stick to the left edge of the rock. Below you should notice a gravity jump. Land next to it and then turn around towards the base on which there was a rune. You will notice an entrance to a pipe in front of which the Mega Health is lying. 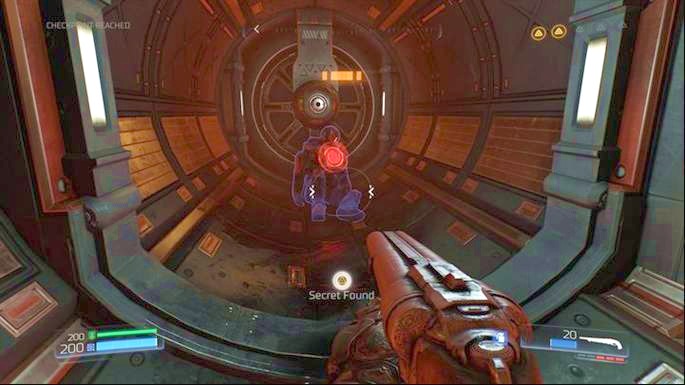 Now you can jump there by using the gravity jump. When you're next to the entrance, use the second jump in order to land. An Elite Guard is hidden inside. Now you can search through the nearby area and kill as many opponents as you can. This will load the progress bar required for obtaining new weapon upgrade points. 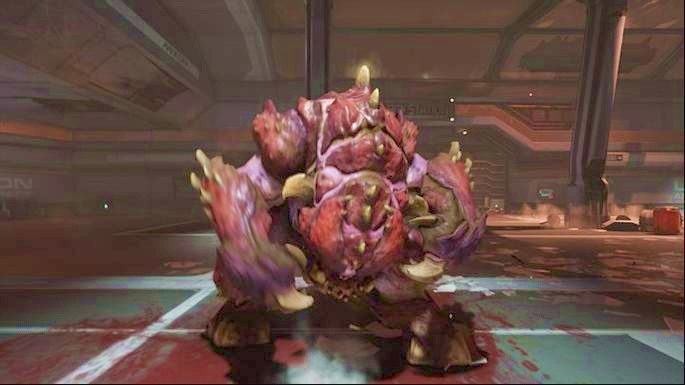 Further path leads through the door near the Rune Trial. Go forward after opening it. Soon a new monster type - Pinky - will attack you. These creatures perform a very unpleasant charge, but their back is vulnerable. Because of that, you should always try shooting them when they charge. It is a good idea to use chainsaw in order to avoid having to fight too many of these strong beasts simultaneously. 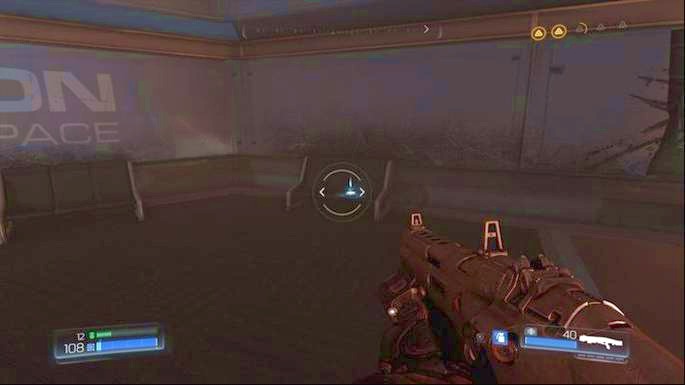 Use Automap on the right side of the room once the battle is over. Pick up the Data Log on the left and then use the computer in the middle. Once the hologram ends you can move through the newly opened door. 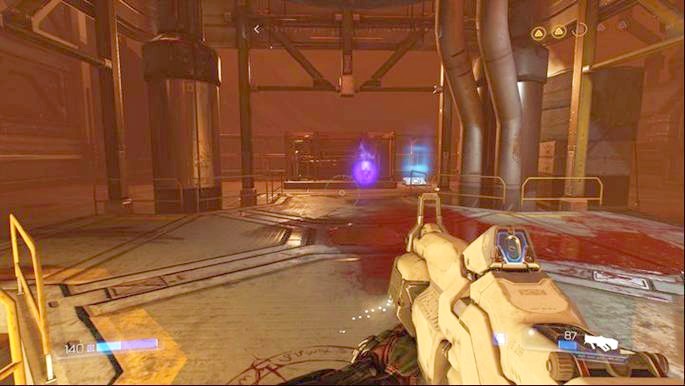 Slightly further another battle awaits you. During the encounter you should use the Quad Damage power-up lying nearby. 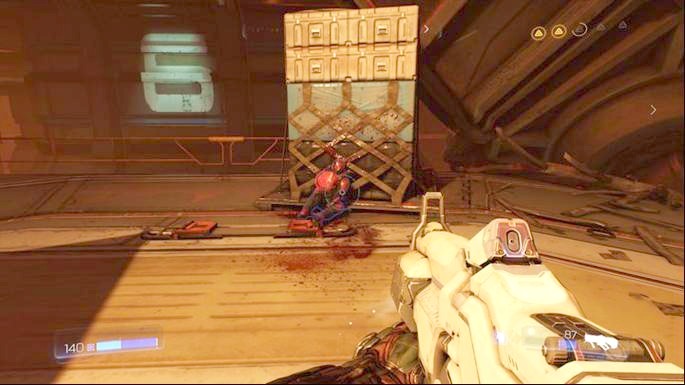 Use the gravity jump once the final opponent dies. Jump on the platform above. Another Elite Guard will be lying there. Climb even higher after searching him and then kill the four enemies waiting for you there. Two Pinkies and one Mancubus will appear at the final part of the battle. First you should get rid of the charging beasts with quick Gauss Cannon shots at their back and then you should finish the last enemy. 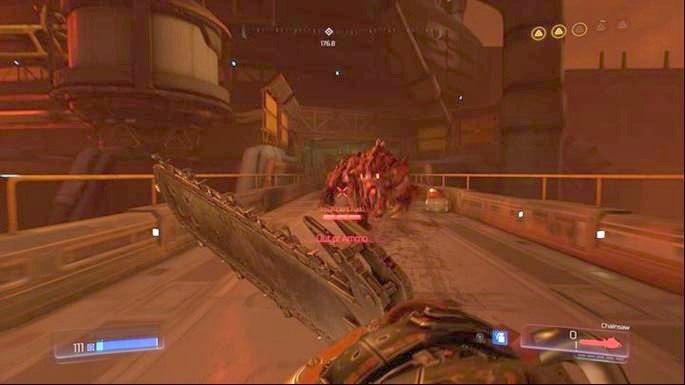 You will find one more Data Log in the room from which the last beasts came. Pick it up and then go ahead. 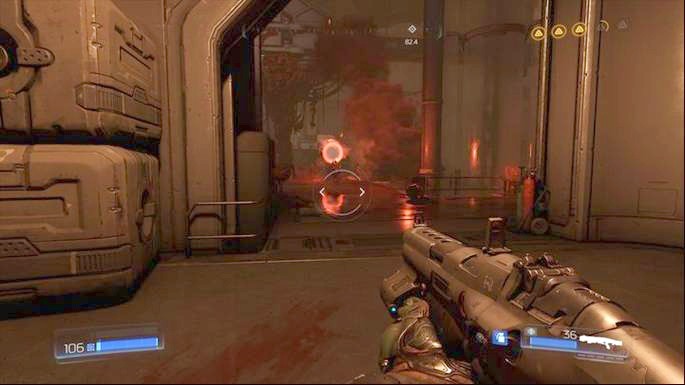 A Gore Nest will be standing in the place where you encounter an escaping Combat Support Drone. Destroy the nest and then defeat all the demons. The Baron can be most troublesome - he will appear as last so save some machine gun ammunition for him. 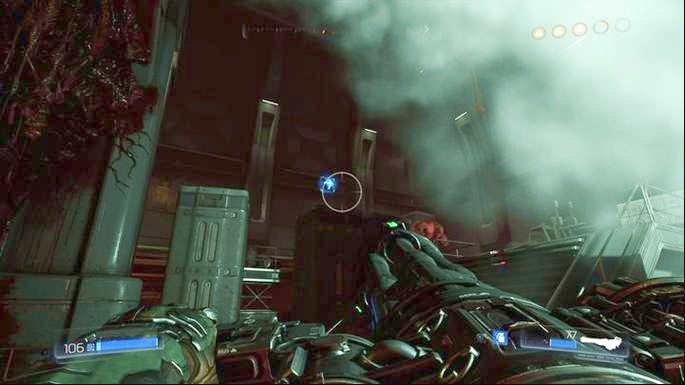 You can also pick up the Mega Health floating above the chests. 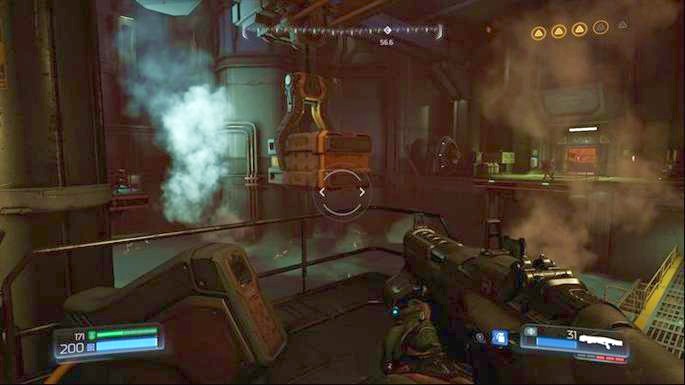 Use the computer ahead of the yellow door once the battle is over. You will move one of the machines by doing so. 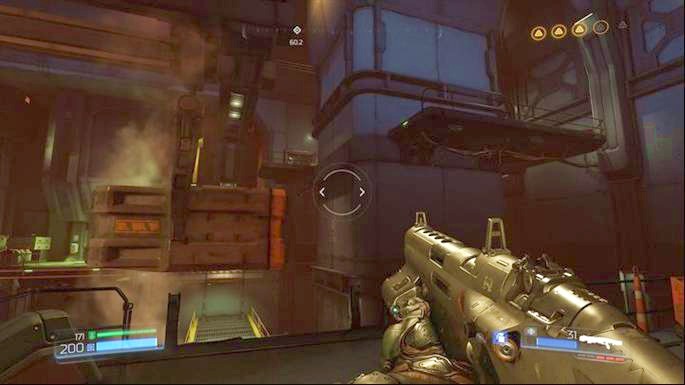 Jump on the wall on the right once it flies towards it. Then jump on the platform on the right. You will uncover the location of Combat Support Drone. 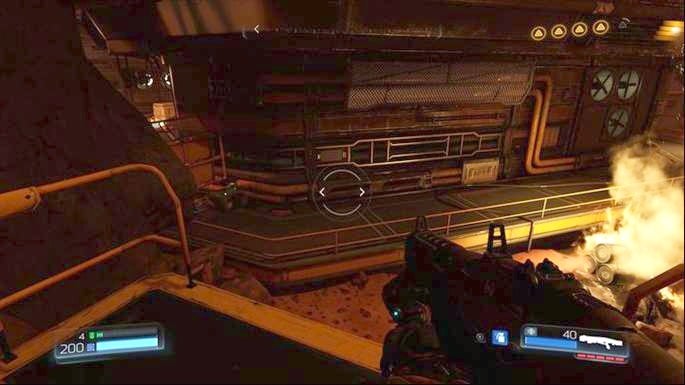 Further path leads through the door below. Once you walk through it, first go to the left. Pick up the armor, kill the demon and then jump on the sidewalk ahead of the armor. 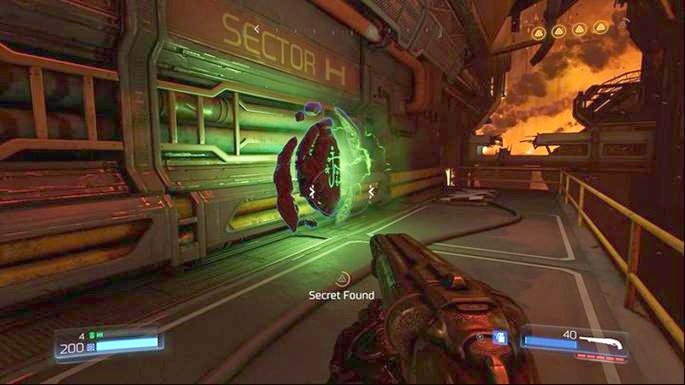 It will lead you to the Rune Trial - Armored Offensive. During it you must kill all the enemies in the limited time. There won't be too many of the demons and you will have some time, but your health might be the source of some trouble. You will start the challenge with only one health point and performing the Glory Kills will only give you some armor. Quickly kill the weakest opponent with a Glory Kill at the start of the battle. This will give you some armor. When fighting Pinky, hit him with a shotgun charged series in his back. This will save you some time. For completing the challenge you will receive a rune thanks to which Glory Kills will give you additional armor. 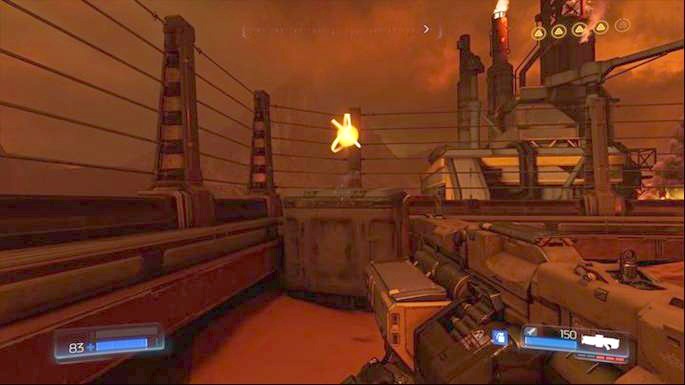 Now you can return to the entrance through which you walked and go to the right. Jump between the rocky ledges lighted in green. You will reach a landing where you will face other demons. The Haste power-up floating in the corner can be helpful. Once the battle is over, pick up the Data Log lying on the landing zone and then jump to the ledge on the right from the door. 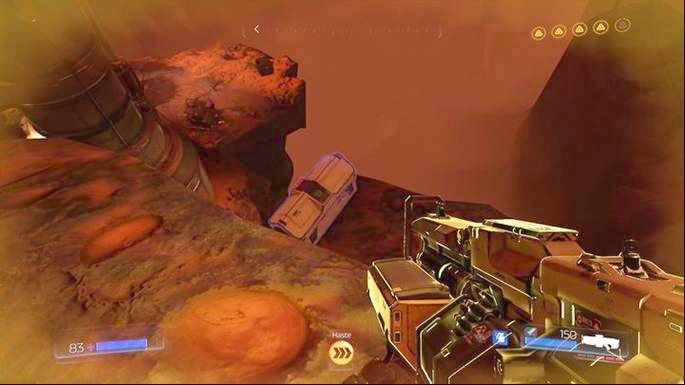 Underneath it there is a ledge on which Argent Cell was hidden. 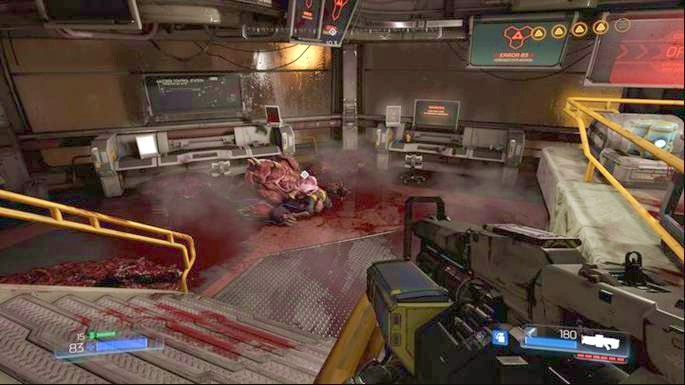 Behind the previously mentioned door you will find the yellow key you are looking for. It will open the nearby door.

Go to the Advanced Research Complex 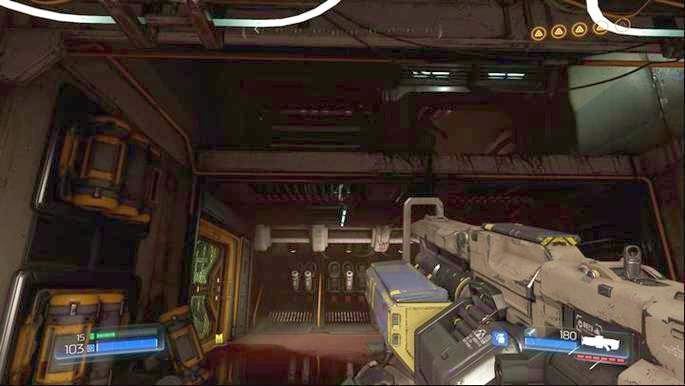 Before you go further down, first go back to the entrance and jump one floor above. 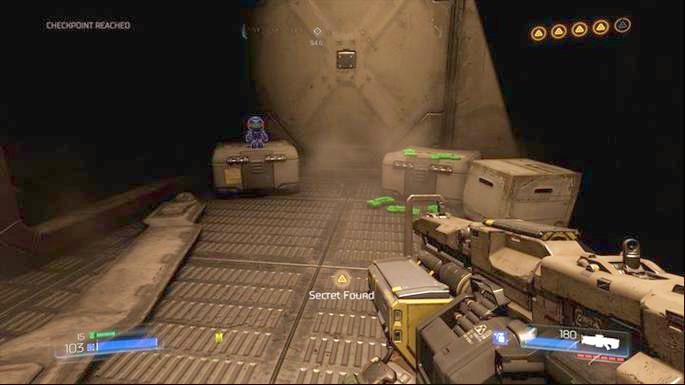 Behind the corner you will find the second collectible (Patriotguy). 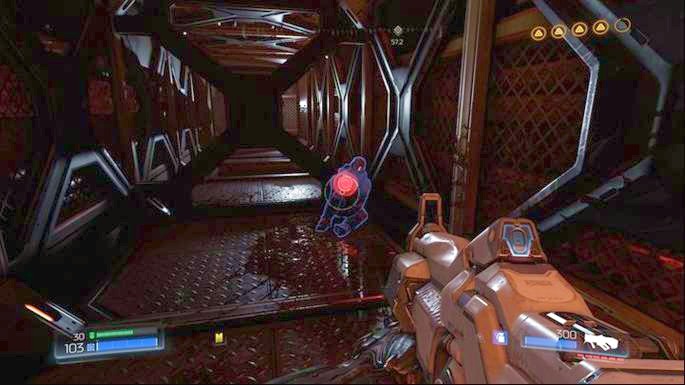 Turn around after jumping down and enter the corridor in front of you. At the end of the corridor you will find the last Elite Guard. Open the yellow door after searching him. Kill the demons on the other side and enter the nearby vehicle. After using the computer the level will end.