This challenge can be completed at the start of the level. Quickly after walking through the hatch, jump over the edge on the left, run quickly ahead and throw a grenade at one Possessed Soldier and two weaker enemies. You will clean the area for completing the challenge. Your objective is to kill three Possessed by using a single explosive barrel. In order to do it, run into four barrels on the left and try separating them. You must roll one barrel far from the remaining ones and lure the four nearby Possessed to the single object. Once they are close to you, shoot the barrel and the challenge will be completed.

Perform 3 "Death from Above" Glory Kills on Possessed Soldiers (attack from above).

When standing ahead of the blue door, go to the right, walk through the bridge and then turn left. By doing so you will reach a place in which it is best to achieve this challenge. There will be many Possessed Soldiers there and a rail on which you can jump. If you fail to kill three opponents using the technique, then load the last checkpoint. 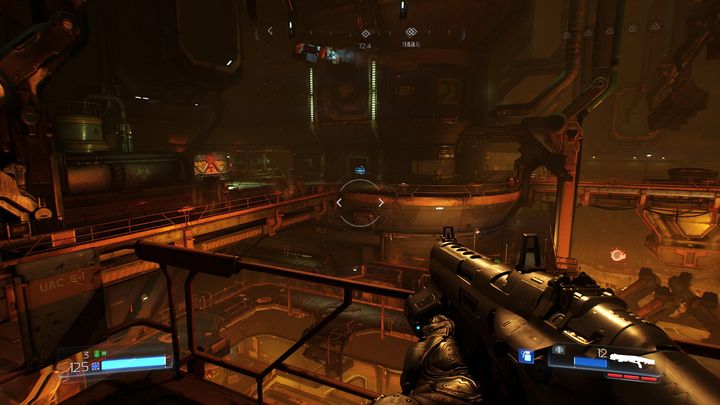 Go ahead after the level starts until you reach a closed hatch. It will open just after you receive information about the so-called Combat Rating. It is a variable that shows the number of killed demons on a level. The more of them you kill, the more weapon upgrades you will receive. Behind the door you will see a very large room in which the first opponents are waiting. First jump over the fall on the left, run quickly ahead and throw the grenade at the Possessed Soldier and two weaker enemies. By doing so you will clean the area for the first challenge [1]. 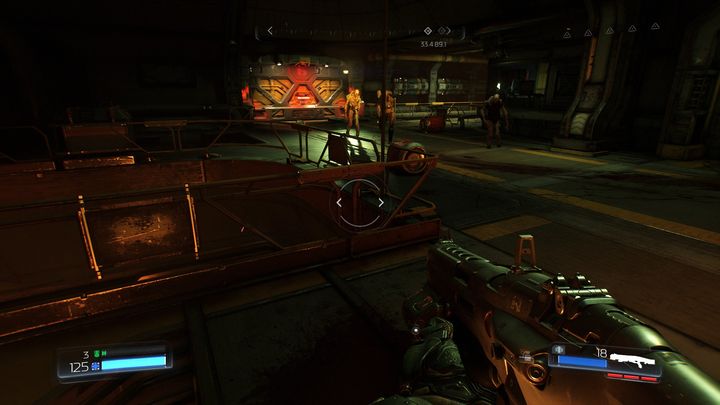 Your task is to kill three Possessed with a single explosive barrel. In order to do it you must run into four barrels on the left and try separating them. You must roll one barrel far from the remaining ones and then lure the nearby four Possessed towards the single object. Once they are close enough, shoot the barrel. The challenge will be completed. 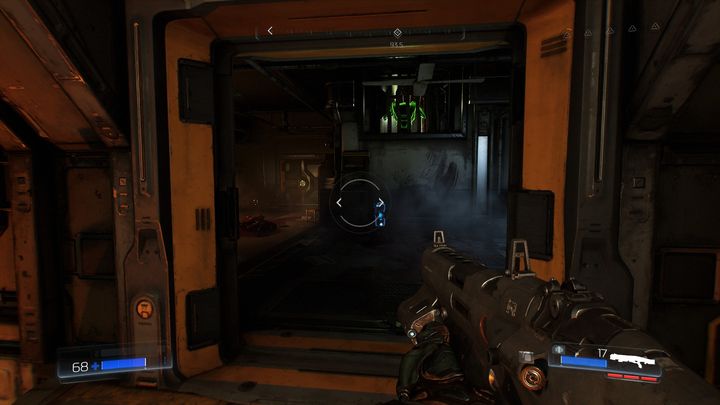 Now go back to the gap in the sidewalk through which you jumped recently and enter the nearby room. Inside you will find armor, the first Data Log [2] and a combat support drone. Walk through other door after buying upgrade and kill the enemies waiting for you there. Among them there will be a Hell Razer. This enemy type depends mostly on his ranged laser, so try running towards him quickly and killing him from close. By going forth and killing other enemies you will reach the room on the left. Inside you will find a panel which requires the hand of a specific employee. In order to obtain it, activate the nearby echo and then follow the hologram. 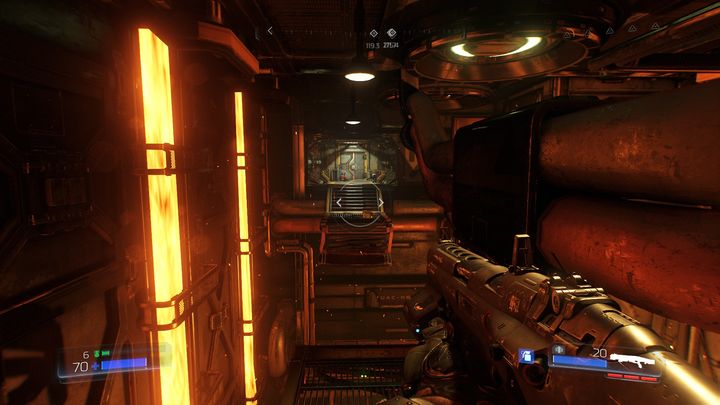 It will lead you to a gap in the sidewalk. You cannot jump over it, so instead of trying simply fall down. 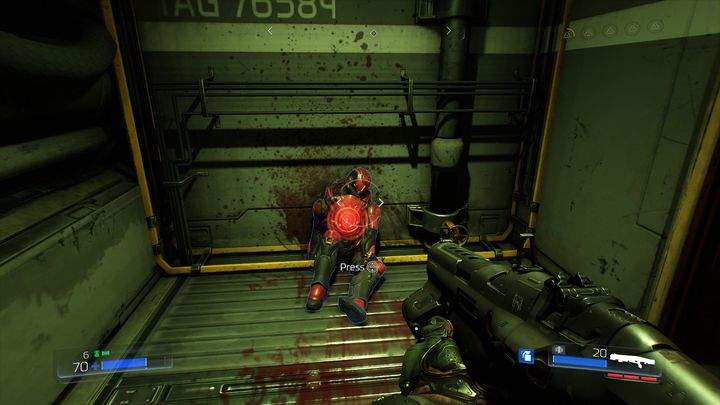 In front of you there is a corridor and inside it an Elite Guard [3]. 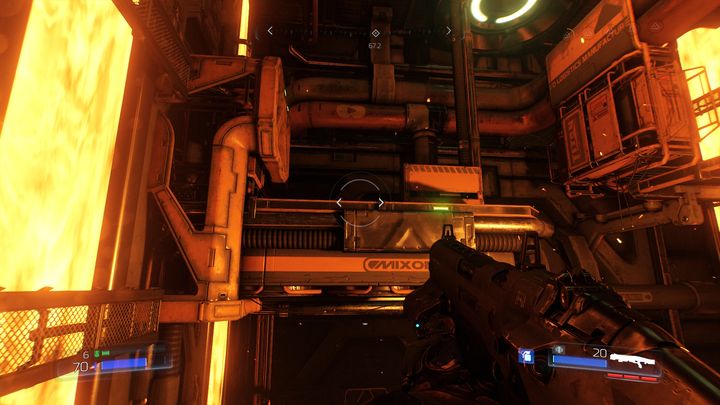 After collecting valuable upgrade go back to the place with the lava and start climbing up, following the green lights. They will show you place to which you can jump. 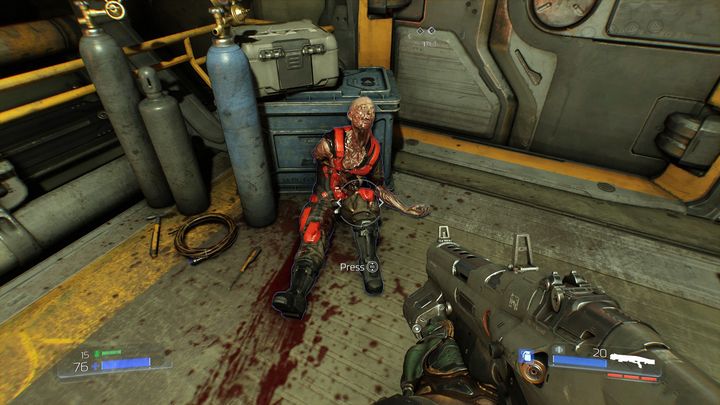 You will get to the other side of the gap and will be able to obtain the hand of the employee. 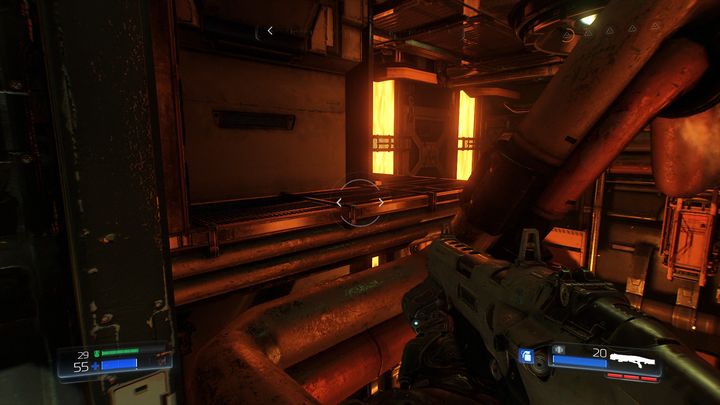 Before you jump back to the other side of the gap (this time, thanks to difference in altitude, the jump will succeed), go to the left from the fall. You will reach a ventilation shaft with armor (a secret) hidden inside [4]. Now you can go back to the previously bypassed scanner and use the hand to open nearby door. Behind it there is the first Gore Nest and a simple battle. As usually, first quickly pick up the armor on the left and then focus on killing the demons. Hell Razers should be your priority. Kill them before they charge their deadly ray. 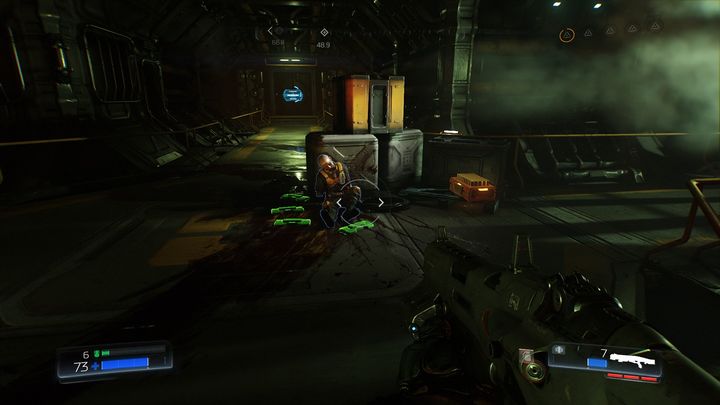 Go back to the large room with lava after the combat. On the other side of the bridge you will see door that require a blue key. Turn to the right from there and stick to the wall on the left. You will reach a place with a corpse next to which the yellow key is lying. 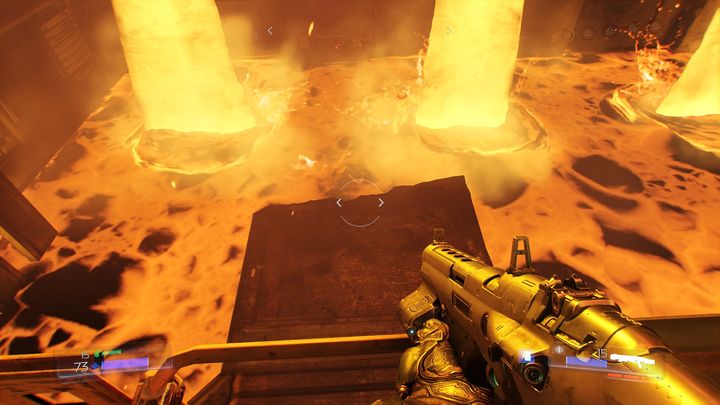 Look at the nearby lava tank after picking the item up. Below there is a small platform on which you can land. 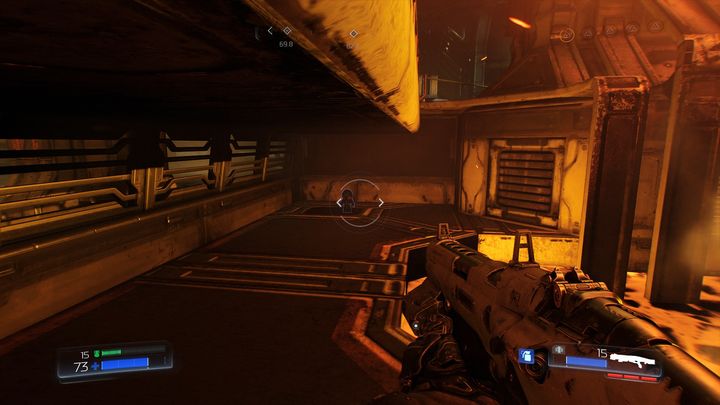 Once you do it, turn around and pick up the collectible [5]. While returning to the main location you will be attacked by a group of demons among which there will be a Hell Knight. This large beast jumps very quickly and charges, so keep going backwards during the battle and shoot the enemy at the same time. The easiest way to get rid of the beast is to throw a grenade just after it appears and then hit it with shotgun's Explosive Shot. After the creature will have so small health that two accurate shots will end the duel. 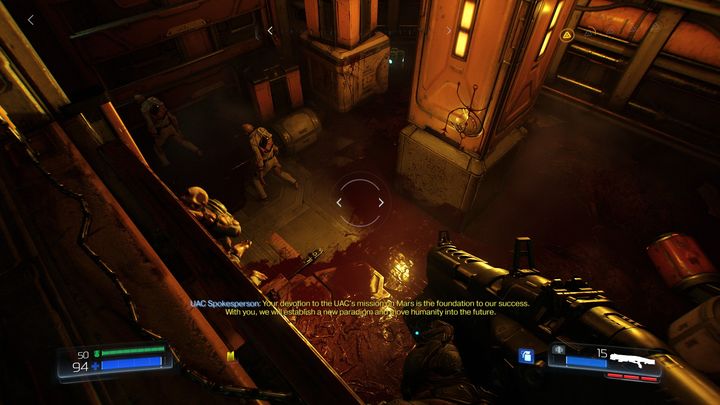 Next to the place where the Hell Knight appeared there are stairs leading one floor below. Use it and then enter the first room on the right. There are many Possessed there and some of them are standing next to a red barrel. You can easily complete the barrel-related challenge here. 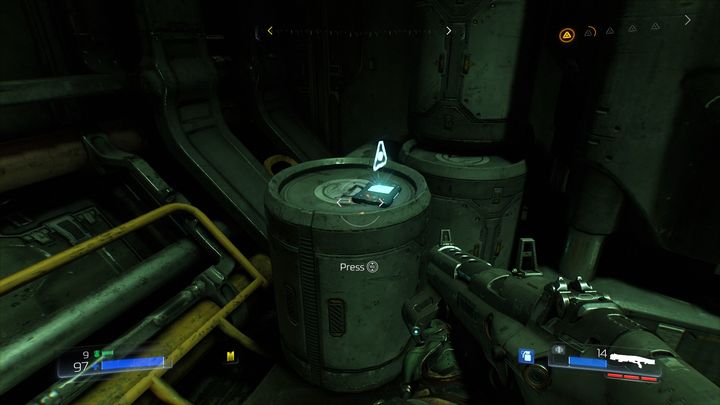 Another Data Log [6] is lying in one of the rooms. While fighting the creatures, keep going below until you reach the place with the second Gore Nest. The battle here isn't very hard, just watch out so that you won't fall into the lava. 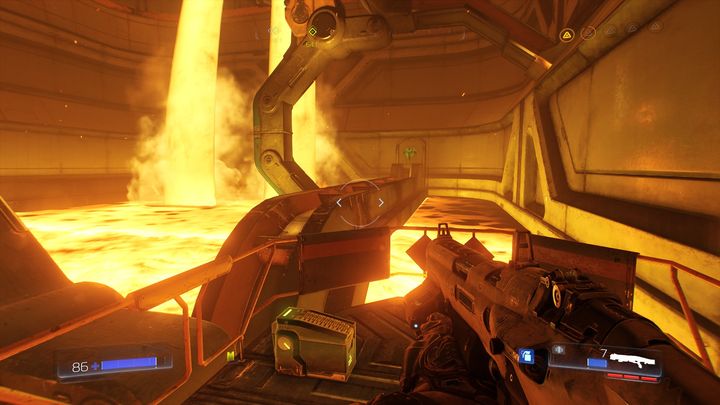 Go through the sidewalks above the lava after destroying the next and defeating the last enemy. On your left there will be armor on a metal platform. Jump on it from the handrail in order to avoid a lava bath. 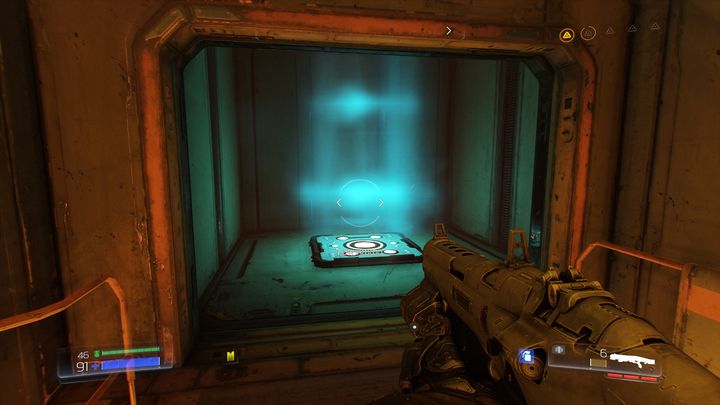 The further path will lead you to a gravity elevator through which you can get to the previously bypassed blue door. 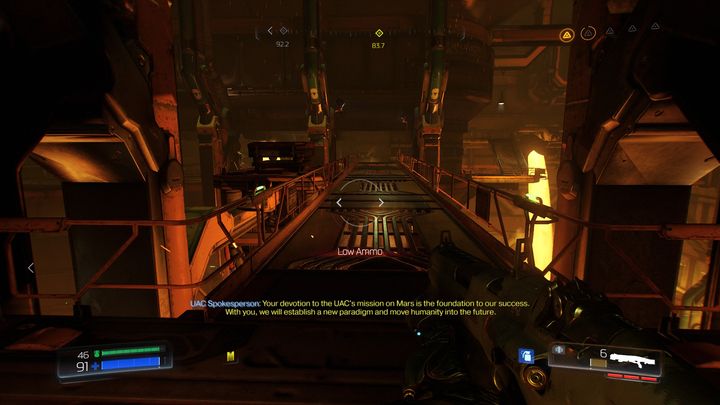 Now you must again go to the right from the door. However, this time instead of sticking to the wall on the left, go to the bridge on the right.

Before you walk to the other side, jump on the platform on the left when you're in the middle of the bridge. Pull the lever [7]. 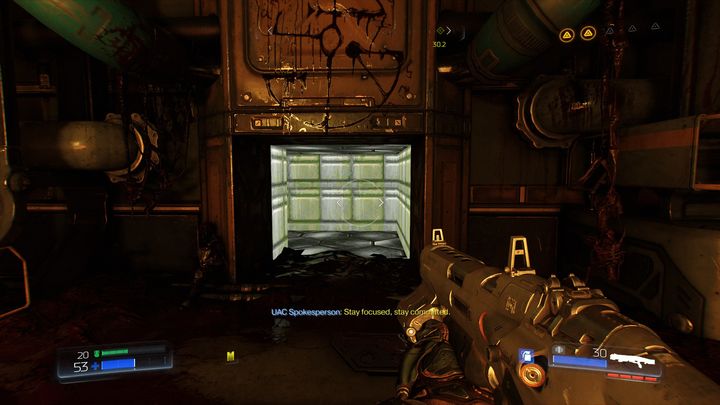 You will unlock entrance to a Classic Map on the other side. 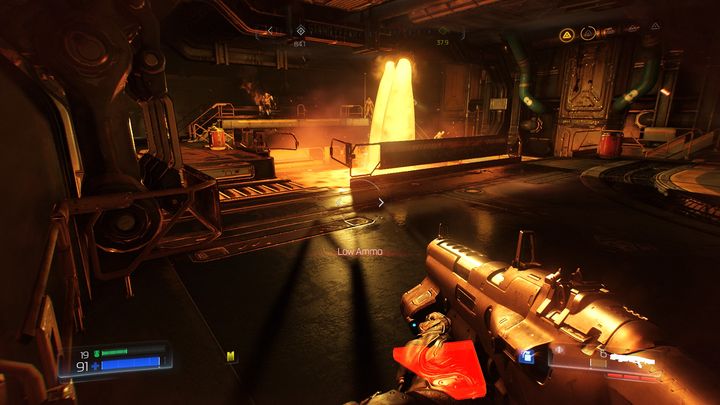 Turn to the left behind the bridge. In addition to the classic map there you will have to face a group of demons. It is the best place to obtain the second achievement. You can finish the Possessed soldiers by jumping on them from above [8]. 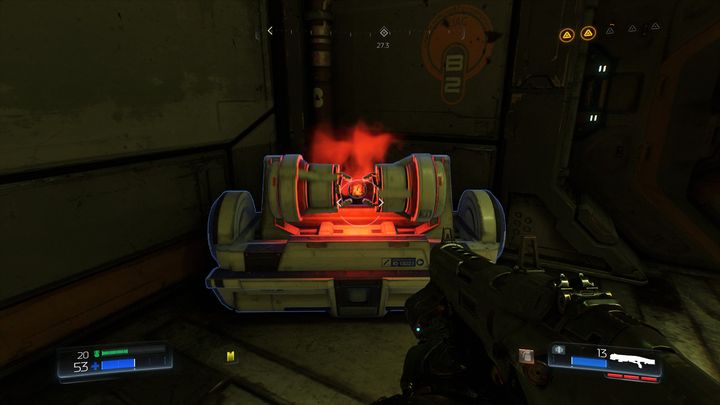 On the left end of the room you will also find valuable Argent Cell [9]. Once the battle is over and you explored large part of the retro location, go back to the bridge and go right this time. 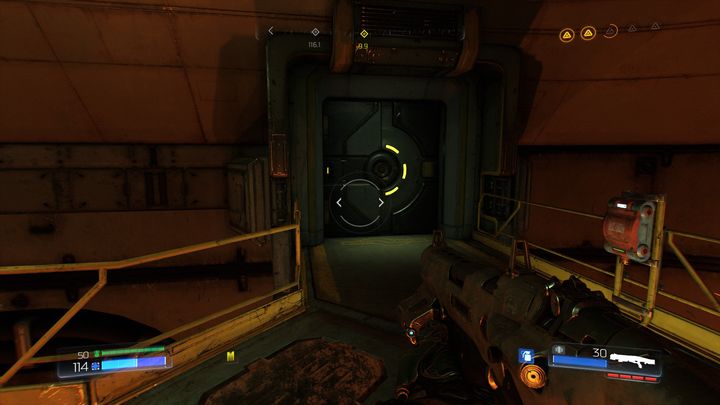 By killing another Hell Knight on your way you will reach a yellow door. Behind it there is a Data Log and large number of demons [10]. 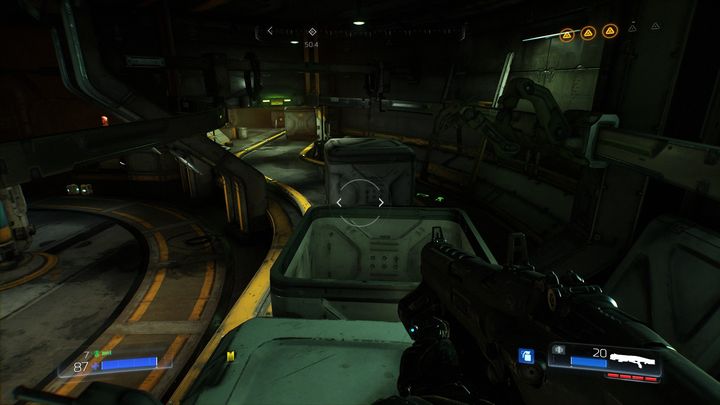 Once all opponents are dead, check the chest on the right. Inside there is another collectible [11]. 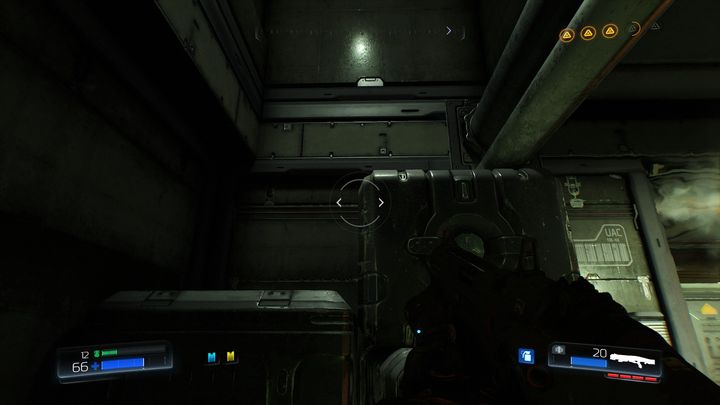 Look to the right before you walk through the door at the end of the room. There you will notice a chest by using which you can climb one floor above. 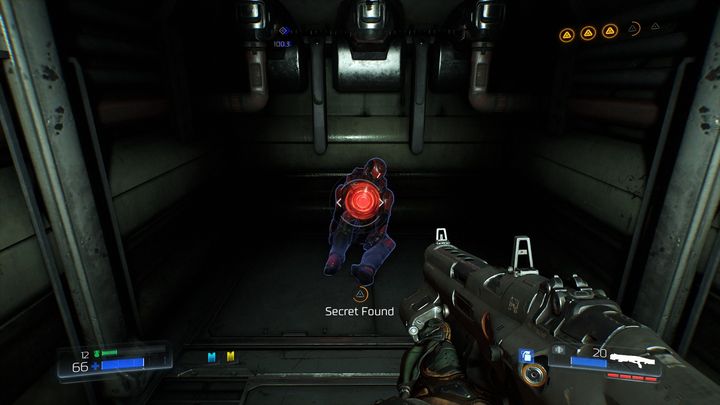 At the end of the tunnel there is an Elite Guard [12]. 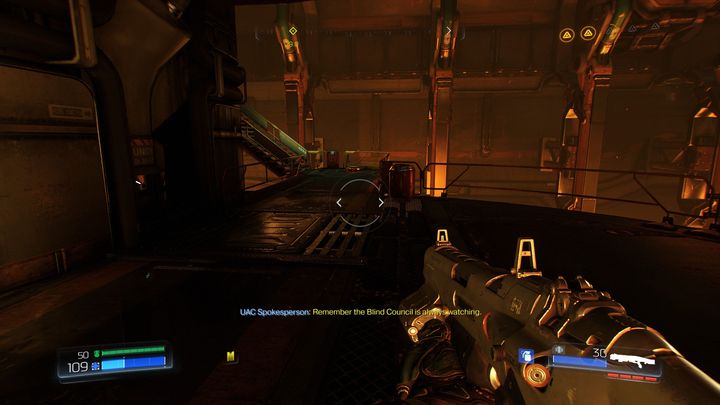 Once you collect another upgrade point, go back down and walk through the previously mentioned gate. Behind it there is the third Gore Nest and a demon fight. Once it is over, climb upstairs. 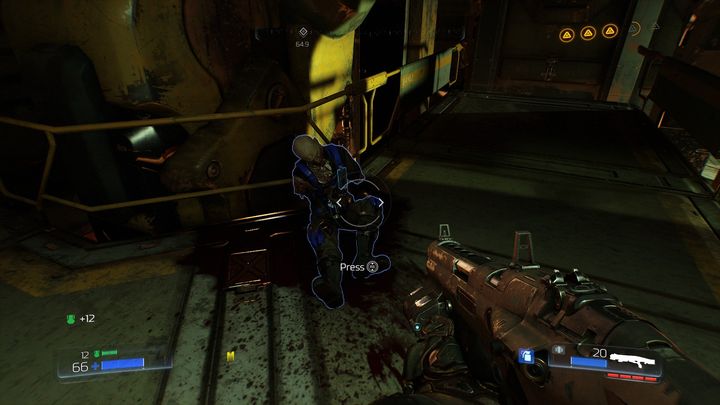 At the top, on the left, there is an Automap. On the right there is a corpse and a blue key next to it. 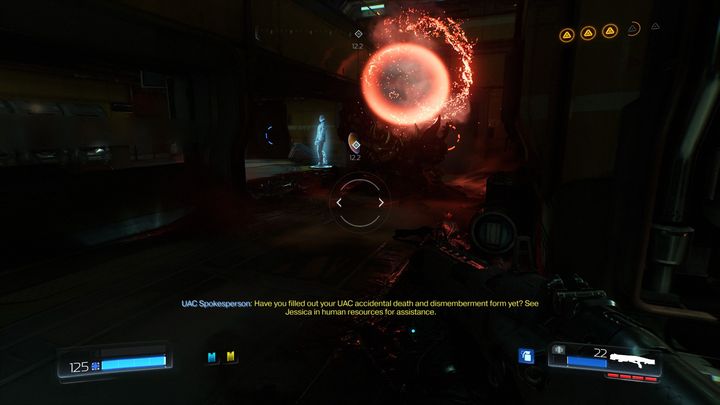 Once you have the new pass, jump down the ruined stairs and open the first blue door. Slightly further you will find the final Gore Nest which you must destroy. 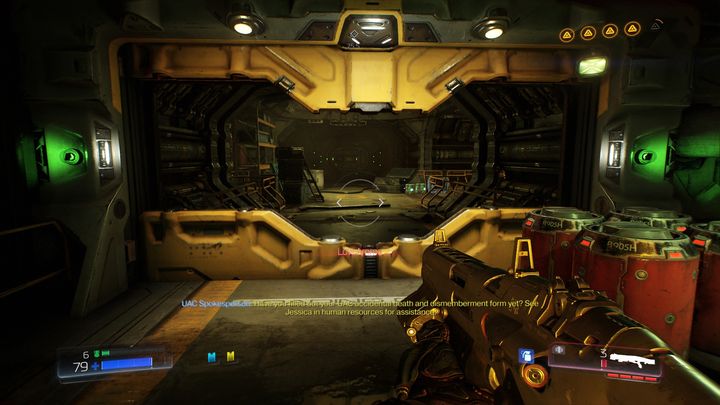 Another blue door will lead you to the start of the location where another Hell Knight is waiting for you. Once you kill the monster you can pass through the hatch on the right side. It will lead you to a terminal which operates the turbines cooling. After using it a long battle against a demon army will start. You will face almost all enemy types. Luckily, thanks to many covers it will be hard to surround you. Use almost every creature to heal and remember about the chainsaw than can allow you to regain ammunition. Two Hell Knights will appear at the end, but keeping them at distance in such large location shouldn't be a trouble. If you feel threatened, simply jump to the bottom. Walking down there should take some time for the enemies and you will have time to regenerate. 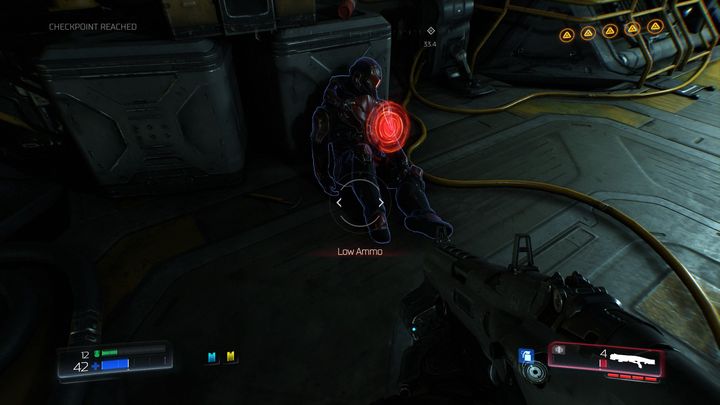 Once the duel ends, go forward. Search the Elite Guard [13] lying in the corridor. At the end of the corridor you will find a panel which will open another passage. Slightly further there is a larger computer that will trigger a cutscene. Once it is over, kill two Imps and go to the right. The level will end.