On this page we have prepared a detailed trophy guide to Doom 64, which you can get as a gift for pre-ordering Doom Eternal. Our guide lists all the available achievements of Doom 64. We explain how to meet the requirements of each trophy in order to complete all trophies in 100%. 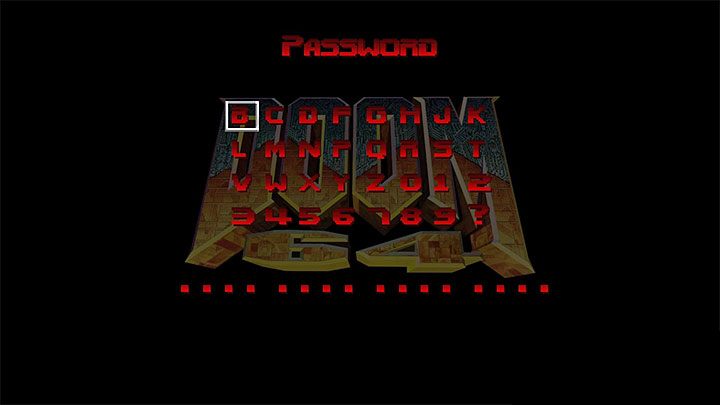 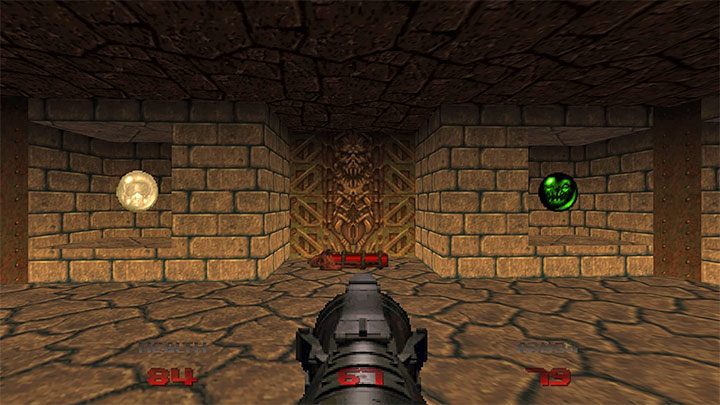 How to unlock: Defeat Mother of All Demons in The Absolution level.

Comment: The Absolution is the title of the 28th level of the game - this is the final level of the main campaign. Once you have started this level, it is important to save your game and can collect all weapons and ammunition you may find. In the starting location you will find, among others, two of the most powerful weapons - the BFG associated with the My Cause is Just trophy, My Will is Strong and Unmaker associated with the Unholy Firepower trophy. You will also find temporary immortality, which is worth using to easily defeat as many weak demons as possible. 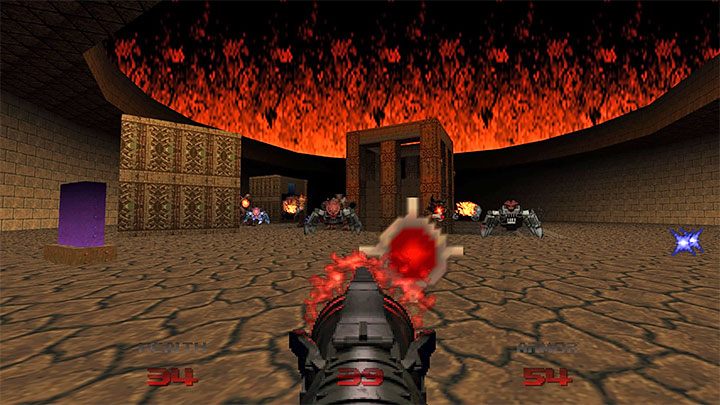 You have to start by fighting a huge battle with the ordinary varieties of demons. It is best to run sideways all the time staying on the outskirts of the arena to effectively avoid all ranged attacks. Use rocket launcher against stronger demons and chaingun on the weaker ones. Don't use the BFG yet - save it for later. 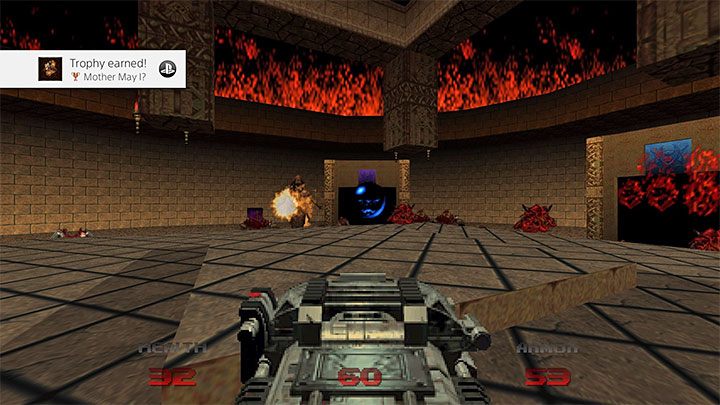 The final boss - The Mother of All Demons will appear in the middle of the arena after you have eliminated all enemy forces. Make a quicksave because you can fail pretty easily in this duel. It is best to use the BFG to attack the final boss - direct hits from this weapon will inflict massive damage to the Demon Mother.

Unfortunately, it is very problematic to avoid homing red projectiles. They are flying much faster than your hero running speed and it's really hard to run away from them or dodge them. Try to hide behind small buildings in the arena - red bullets may hit them instead of damaging your hero. In the middle of the arena there is a Health regeneration power-up - a blue sphere. You may try to run towards it, but it will be very risky as you can expose yourself to Demon Mother's attacks.

If you still want to cheat on this trophy, enter the W93M 7H20 BCY0 PSVB password in the game options. You will be automatically transferred to the final mission of the main campaign. 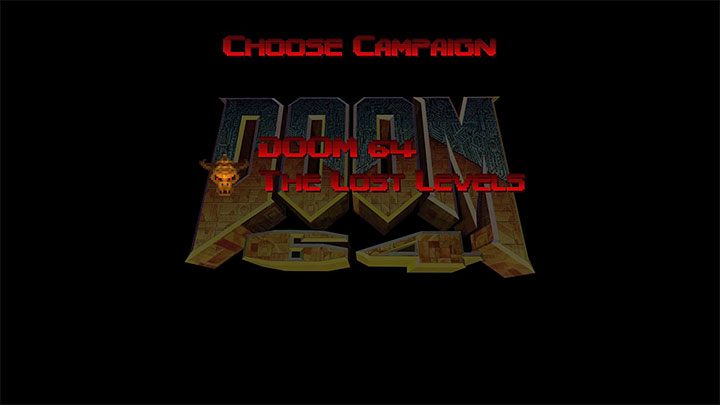 How to unlock: Complete The Lost Levels campaign. 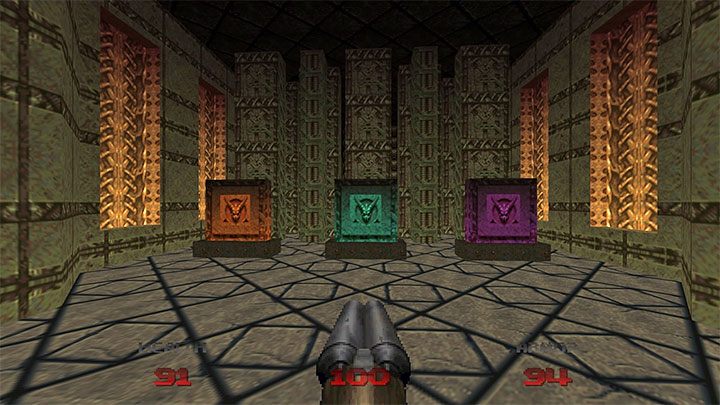 The final stage of The Lost Levels campaign is Final Judgement. In addition to killing a huge number of demons, you will also have to look for demonic keys. You have to deliver them to the objects presented in the picture above.

After opening the passage, you will face the Mother of All Demons. This battle is identical to the Mother battle from the original campaign. This mother is easier to beat because there are more walls and buildings in the area to hide from red homing missiles. 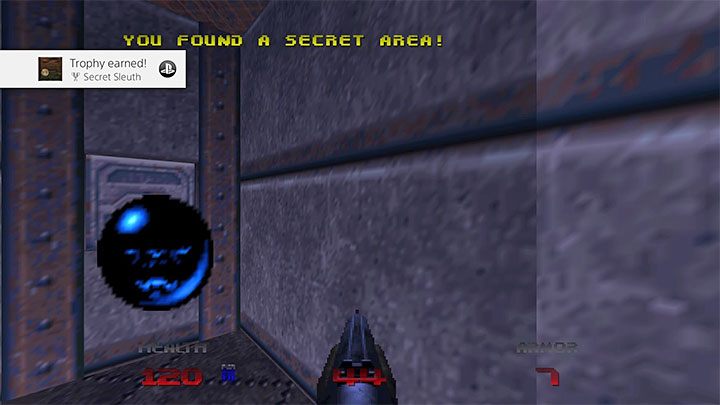 How to unlock: Discover a secret area.

Comment: This is probably the simplest trophy available in Doom 64. There are several secrets to find in each campaign mission. Interact with walls anywhere you can. You can also try to collide with them, as some walls are illusions. The trophy will be awarded as soon as the first secret area has been discovered. You don't have to explore all secret areas during a particular mission - one is enough.

My Cause is Just, My Will is Strong 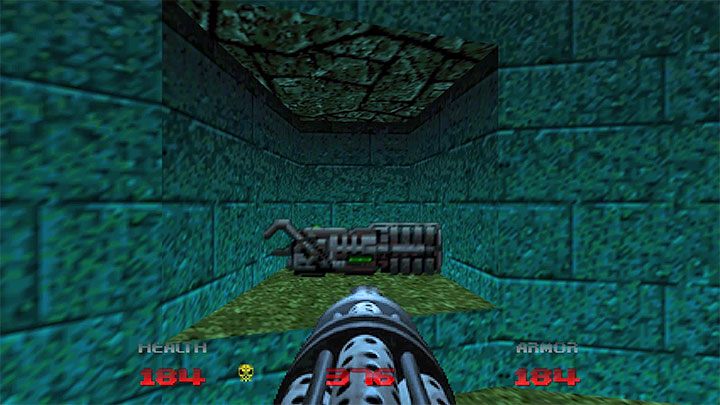 Comment: You can get BFG 9000 weapon in more than one Doom 64 level. An example of such mission is The Bleeding level - BFG lies on a ledge next to the water.

BFG is the easiest way to get the Mother May I? trophy. After reaching the final 28th mission of the main campaign (The Absolution), the BFG 9000 weapon can be found at the starting point. 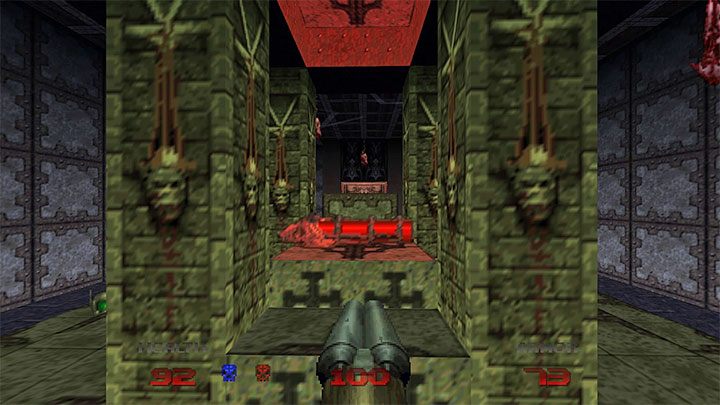 How to unlock: Find Unmaker weapon.

Comment: You can get Unmaker weapon in more than one Doom 64 mission. An example of this is the Altar of Pain mission - the Unmaker is on the altar in a square room that can be unlocked by pressing one of the buttons.

The easiest way to get an Unmaker is while earning the Mother May I? trophy. After reaching the final 28th mission of the main campaign (The Absolution), the Unmaker weapon can be found at the starting point.

Persistence is the Key 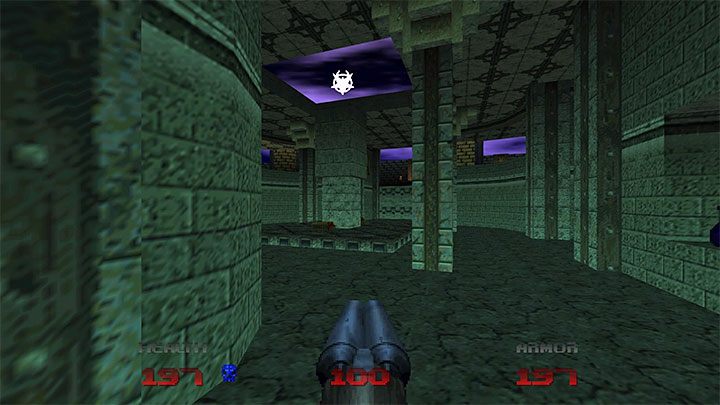 How to unlock: Get all 3 Demon Key Artifacts in the campaign.

Comment: The Demon Keys are obtained in secret missions of Doom 64:

If you don't want to waste your time you can enter the V87L 7C28 BDT1 59VB password, which will allow you to start The Lair stage with two Demon Artifact Keys in your inventory. So your task will be to find the last third Demon Artifact Key.

The demonic key is on the platform presented in the image above - your task is to lower the pillar. 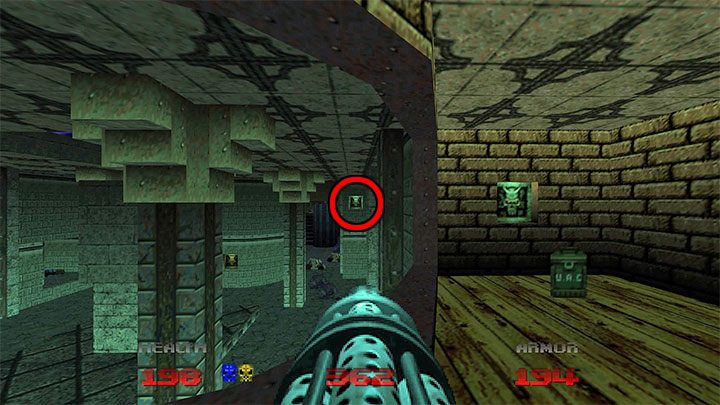 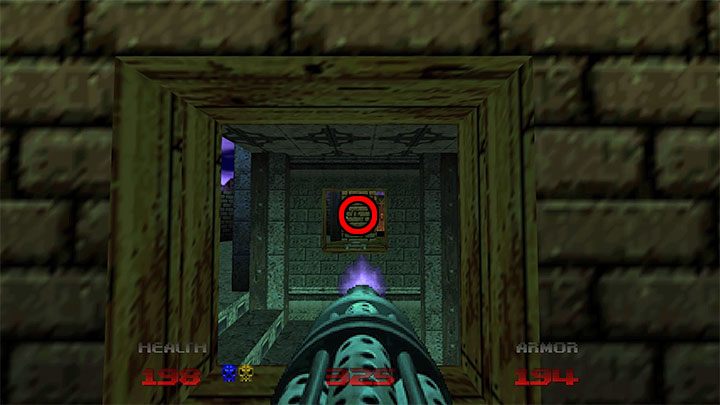 Go upstairs. Shoot the two buttons highlighted in the pictures above. Each of these buttons stays visible for only a brief moment, so you have to hurry up. 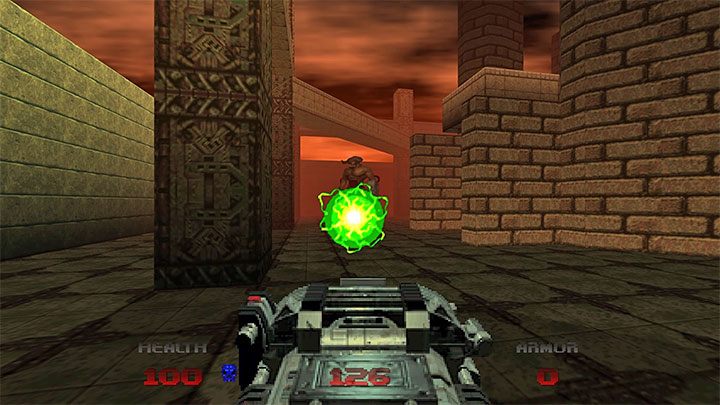 How to unlock: Kill the Cyberdemon.

Comment: Cyberdemons are the strongest variety of standard opponents - they are huge demons using missile launchers. If you're going through the whole campaign, the first confrontation with Cyberdemon will take place in mission 17 - Watch Your Step. Several Cyberdemons have to be defeated during the No Escape mission associated with the Escape Artist trophy.

Cyberdemon will appear in the Watch Your Step mission after killing the weaker demons. Use BFG to weaken the Cyberdemon and switch to a rocket launcher when the ammunition runs out. Avoid rockets fired by Cyberdemon, as they deal very high amount of damage. Cyberdemon fires a series of 3 rockets. They do not fly very fast and only in a straight line - you can easily run away and dodge them. 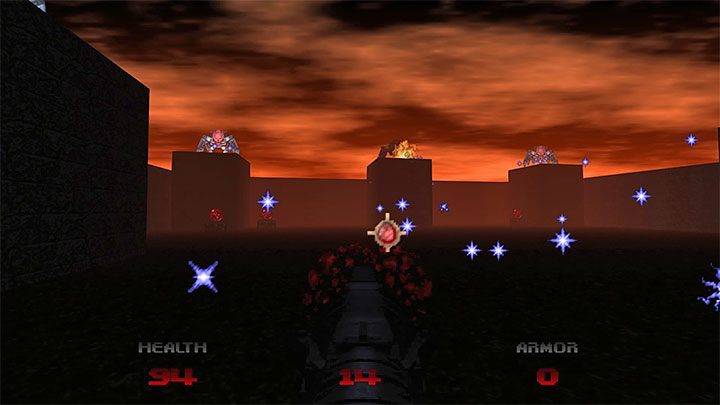 How to unlock: Complete a level from the Fun group.

Comment: Fun Levels are secret missions in Doom 64, with an unusual stage design. It is best to enter these levels by entering the appropriate password and for the purpose of this trophy it's best to choose mission 32 - Playground. Enter the password in the game's main menu - RY48 9BFY 6?JM KBK?. Note - You cannot save your game while playing Fun levels. You have to complete the mission in a single run.

The Playground level consists of three parts. In the first part you fight the Arachnotron monsters and the only difficulty is that you have to move in the dark. Quickly pick up the rocket launcher and shoot at the mechanical spiders. They'll die fast, but move around a lot to avoid their incoming bullets. 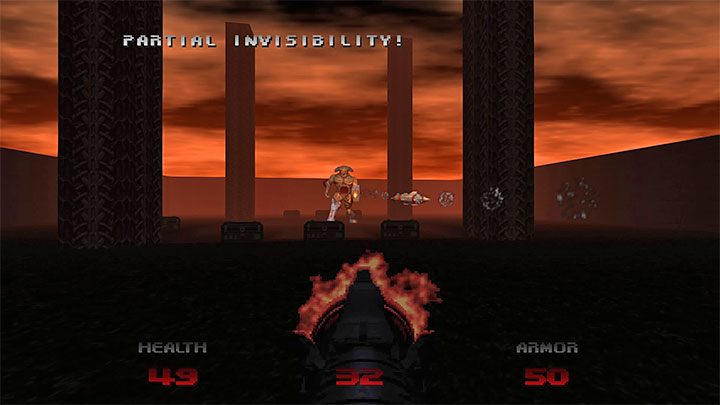 In the second part of the mission, a single Cyberdemon will appear. Run around it and only approach the middle of the arena when your missile supply is exhausted. Also, be careful not to hit any poles located near him. 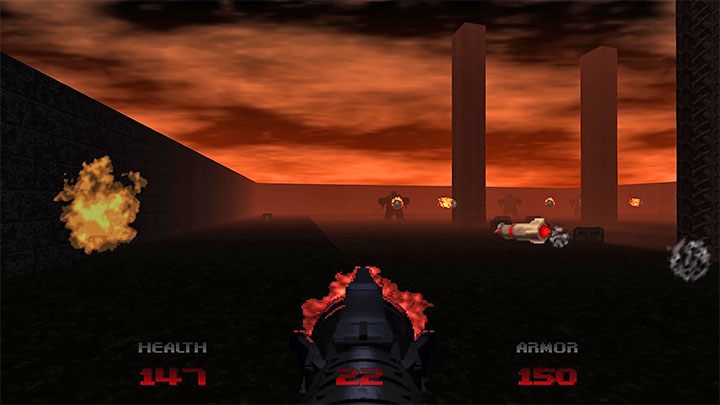 In the third part of the level, a group of Mancubus demons will appear. This enemies are very dangerous in small groups - beware, as you may die. Stay in the middle of the arena and try to kill 2-3 Mancubus demons from any area of the map as soon as possible. This will allow you to set up there and run sideways to avoid rocket fire. 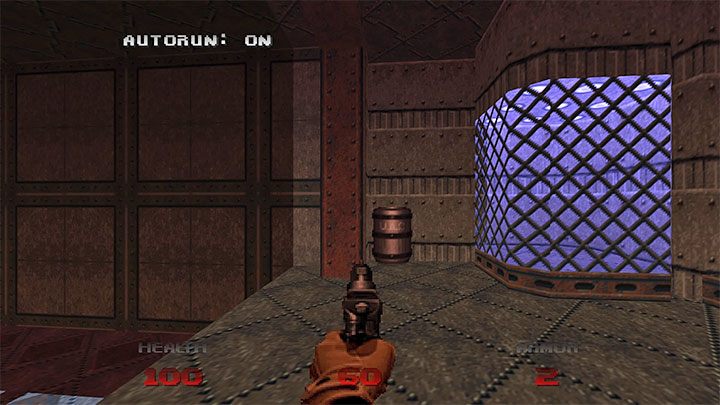 How to unlock: Find The Secret level called Hectic.

Comment: Hectic is the title of the 32nd mission and this is one of the secret levels available in Doom 64. You can access it from level 1 - Staging Area.

To unlock access to the secret level you must destroy 10 barrels in the Staging Area mission. It is very important to destroy the barrel marked in the above picture as the last one (10) - it is located right next to the place where the mission starts. This is important, because after you destroy this particular barrel a teleporter to level 32 (Hectic) will be unlocked for a short period of time. 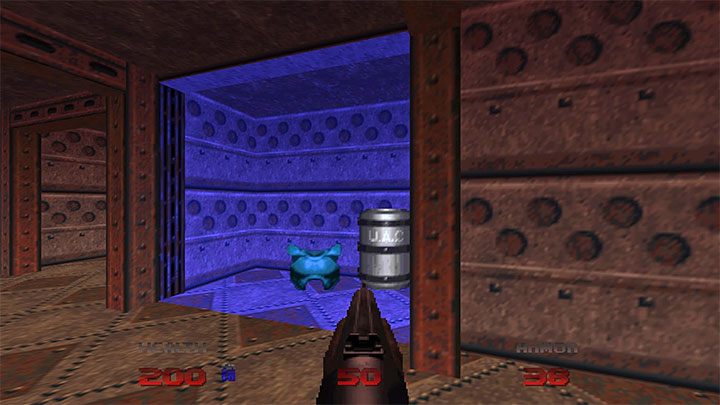 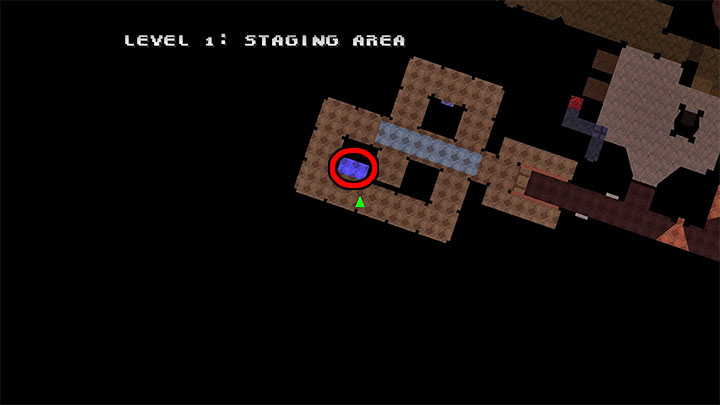 Finding 8 out of 10 barrels is very easy - just check all the rooms on the map. The ninth barrel is most problematic because it is in a secret area. Touch the wall in the image above to reveal the secret area. 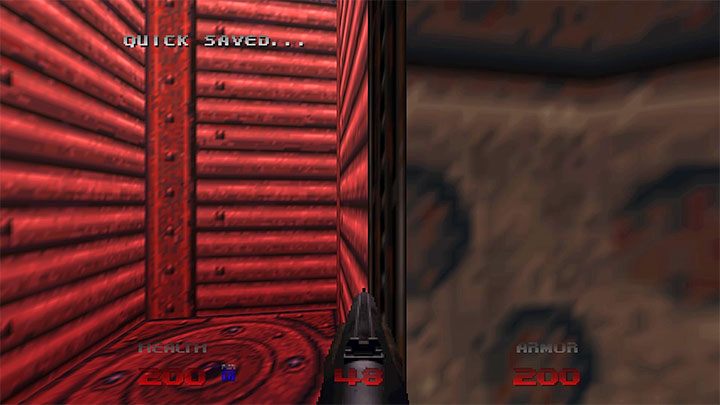 After blowing up barrel number 10, quickly open the door to the right of it and reach the red portal. We advise you to save the game before destroying the aforementioned barrel. 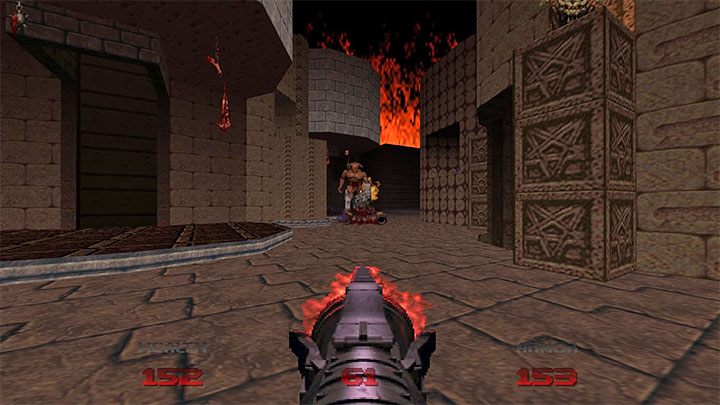 How to unlock: Complete the No Escape level on Watch Me Die difficulty level.

Comment: No Escape is the title of mission 24, one of the penultimate levels of the main campaign in Doom 64. If you do not want to go through the whole campaign at a high level of difficulty (Watch Me Die), then enter YWW4 7HVD BCLG RKVB code in the main menu. It will allow you to start the No Escape mission at the required level of difficulty.

No Escape is a rather short level. However, you will have to fight against lots of stronger demons in this mission. What's more, by playing on the Watch Me Die difficulty level, even more will demons appear. You will have to defeat as many as three Cyberdemons - so it's a real challenge. The first Cyberdemon will appear in the company of the weaker beasts shortly after the stage begins. A pair of Cyberdemons will appear at the end of the stage. Just like in other confrontations with this powerful foes, use the BFG first and then the rocket launcher. 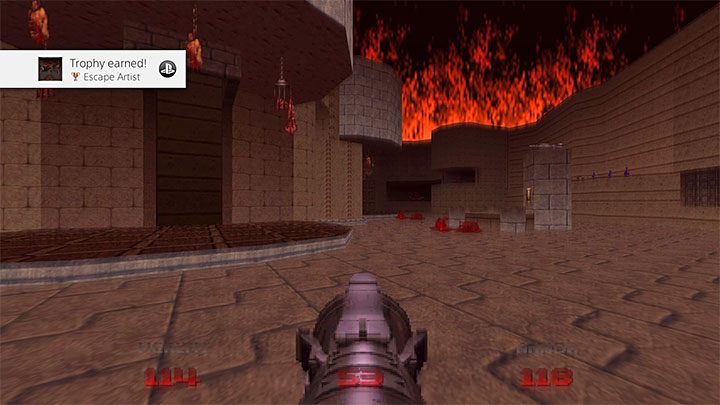 You don't have to reach the extraction point (exit point) in the No Escape mission. It will be counted when the last Cyberdemon is killed. After that, you will earn the trophy.