This page of the Doom Eternal game guide provides a walkthrough for Super Gore Nest mission.

Return to the ship 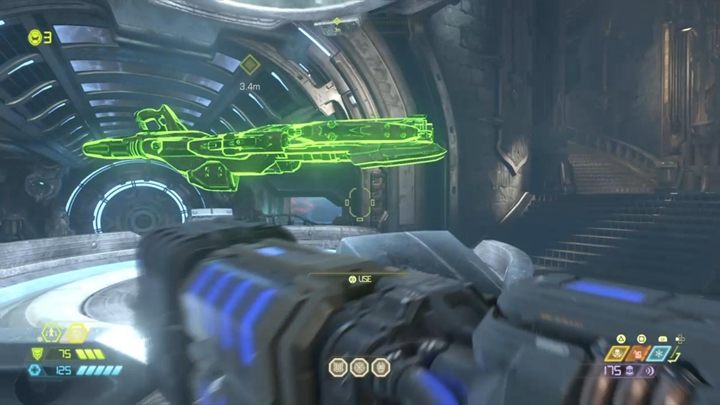 Watch a short cut-scene and pick up a new weapon - Ballista. This is a powerful weapon that shoots an energy beam. It is slow but powerful, perfect for slow and strong targets. Choose your next destination and start Super Gore Nest mission

The mission has the following challenges: 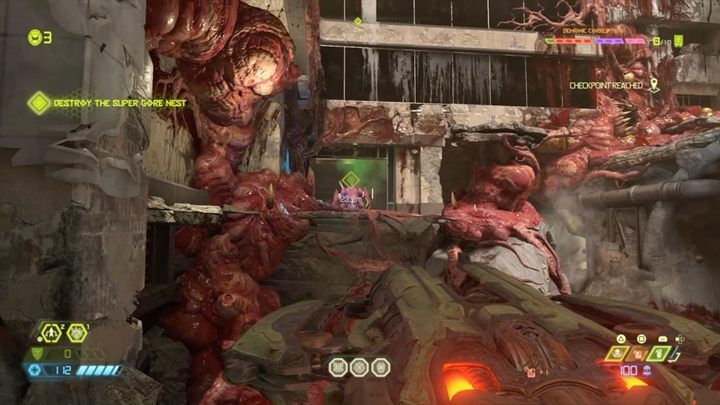 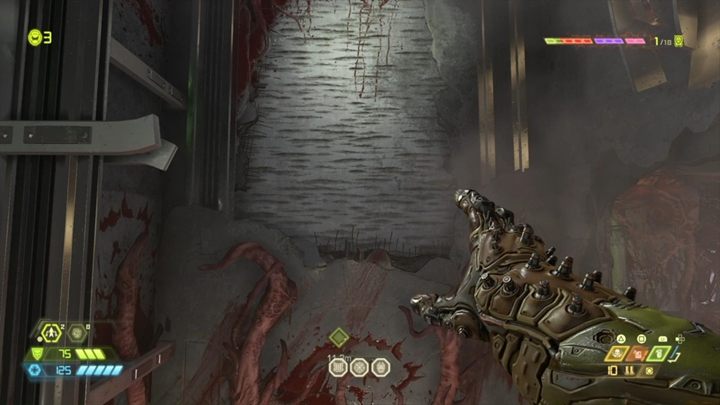 Move towards the marker and jump on the sections of the streets. Eventually, you will reach a vast area with demons and organic tissue in the center. Win, and the door will open - continue on your way. Inside the building, you will find a climbing wall - jump on it and move up. Jump to the enemies fighting each other and kill them. 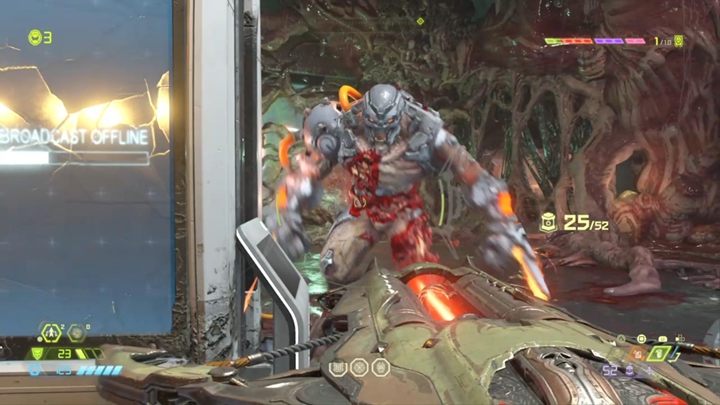 You will encounter a new enemy - Dread Knight, a demon that uses blades. This enemy is best killed with the heavy cannon. Don't forget to keep your distance, because the enemy has powerful melee attacks. 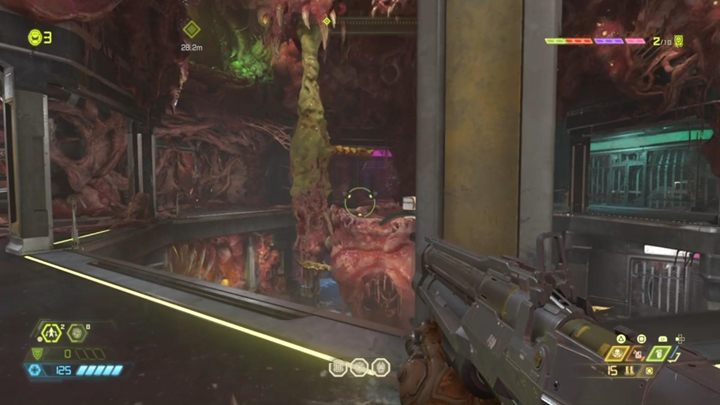 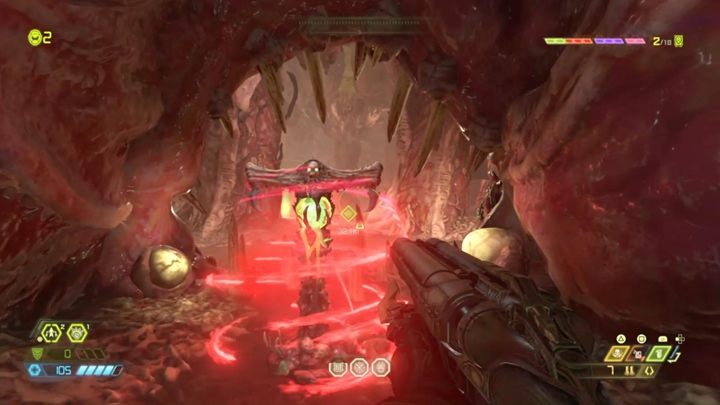 After the battle, swing on the bar to jump up towards the tunnel. You will reach an area with enemies and a totem. This totem greatly strengthens the surrounding enemies, increasing their speed and attack power. In each battle, you need to track down this object as quickly as possible and destroy it. In this case, the totem is behind one of the portals. One of the portals will lead you to the yellow key. 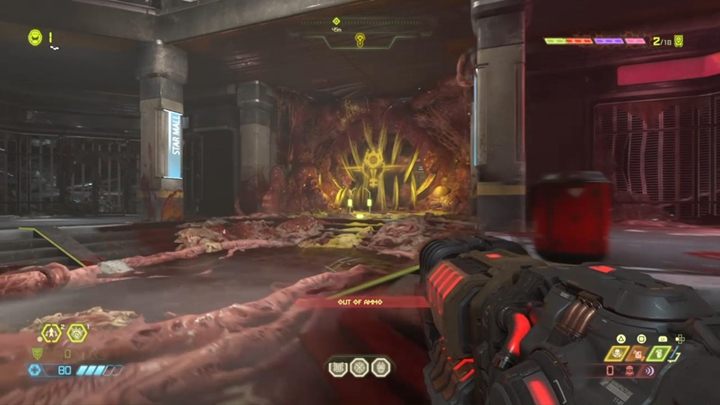 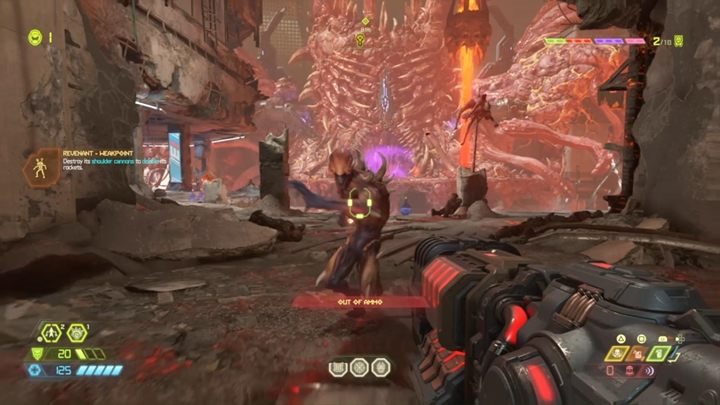 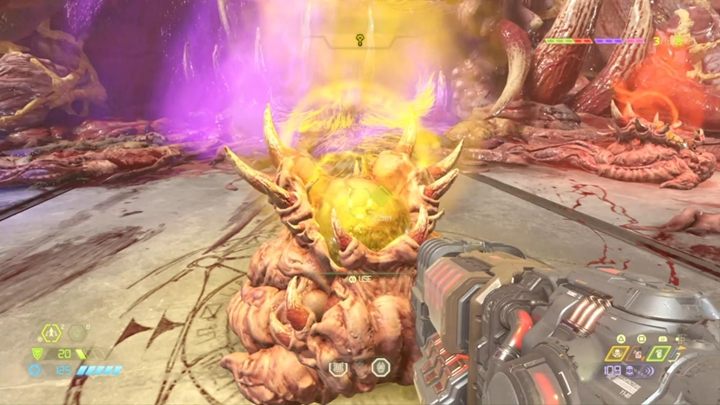 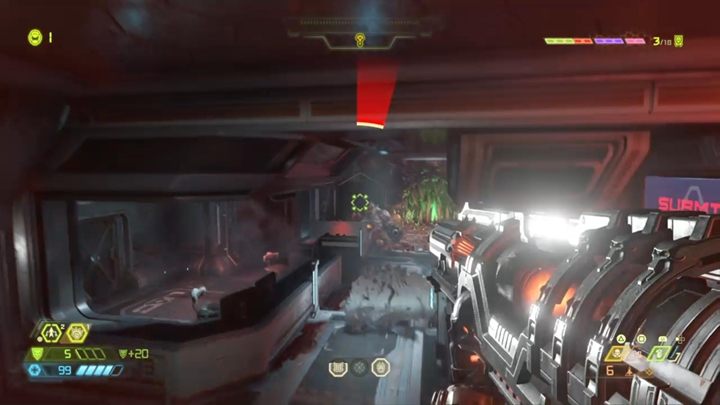 Go forward and jump down the elevator. Along the way, you will encounter new enemies, including invisible creatures - Spectre. Set them on fire or freeze to learn their locations. Jump down again - you will encounter a lot of enemies. 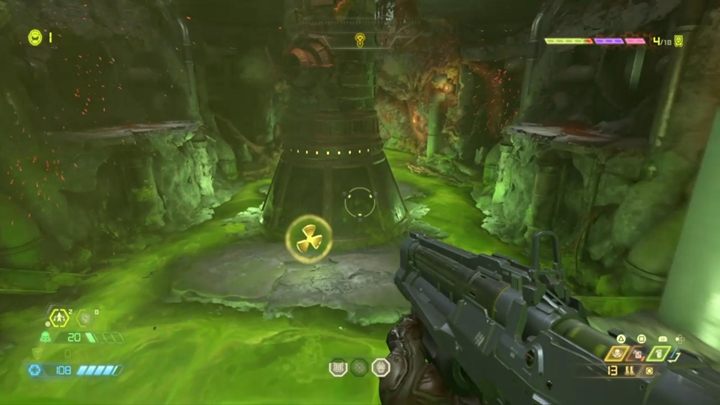 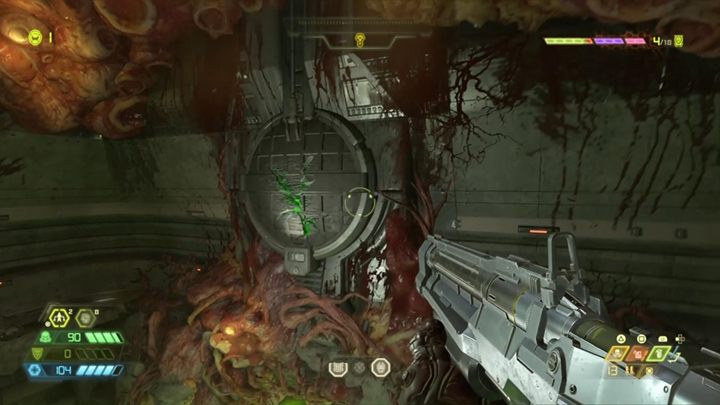 Along the way, you will find Rad Suit that will allow you to walk/swim in toxic water. Use it to get past the toxic water, restore the suit at the next location, and continue moving forward. Swing on the bar to jump into the shaft and destroy it. 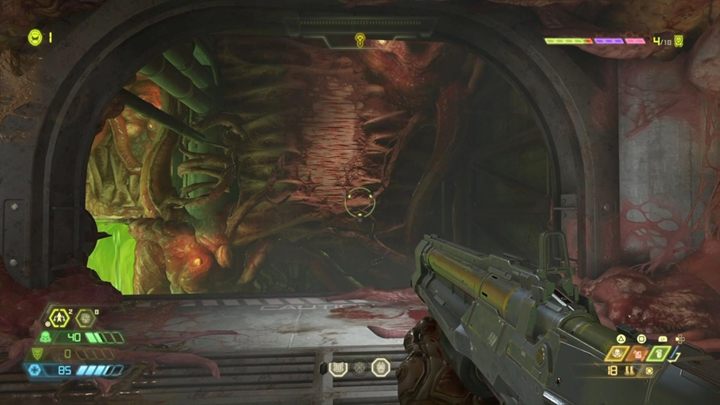 In the next location, you have to jump on the climbing wall and get to the Red Key. 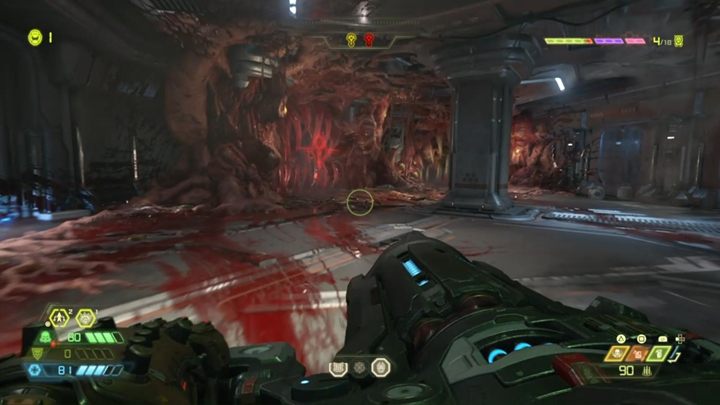 Return with the key to the room with the Machine Gun. You can now pick up the new weapon. It kills demons fast but you have to watch out for e.g. its ammo supplies. Go to the red gate and open it with the key. 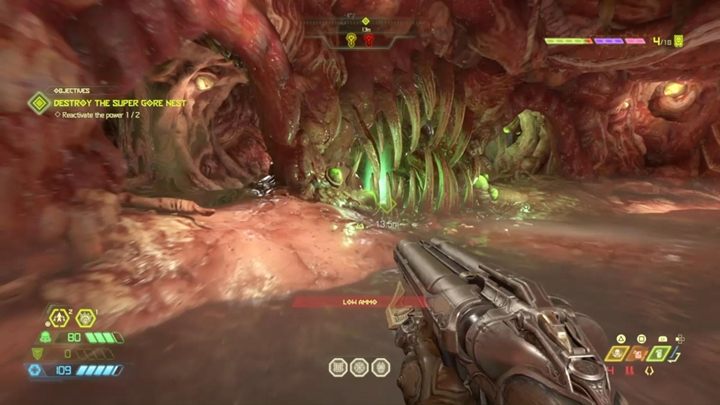 Use the panel to damage the heart. Defeat the demons and move on. Find a switch behind the closed mouth - use it and teleport. 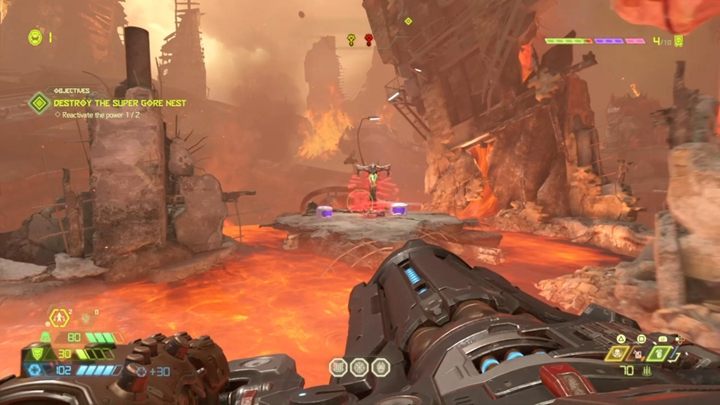 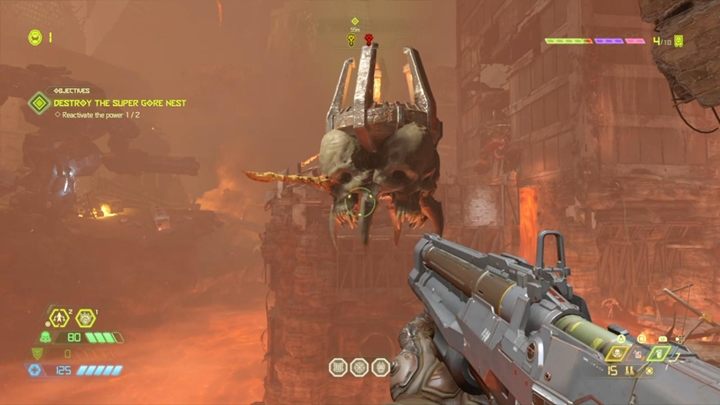 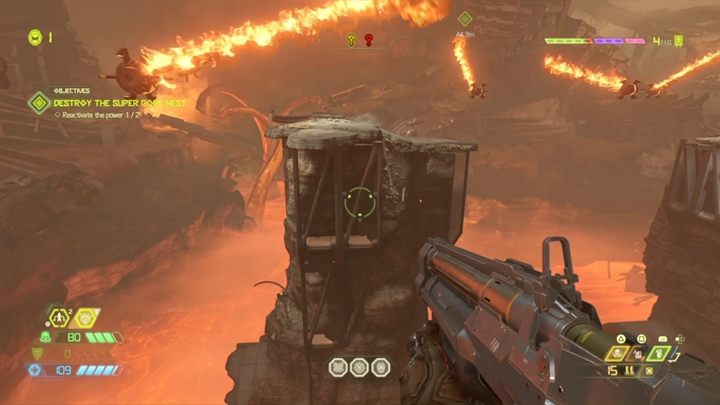 In this sector, you will find a lot of demons and a totem. Find bars next to the totem - swing on them, jump, grab the climbing wall and move up. Then press on the chest with your fist, jump on it and then jump on the platforms. 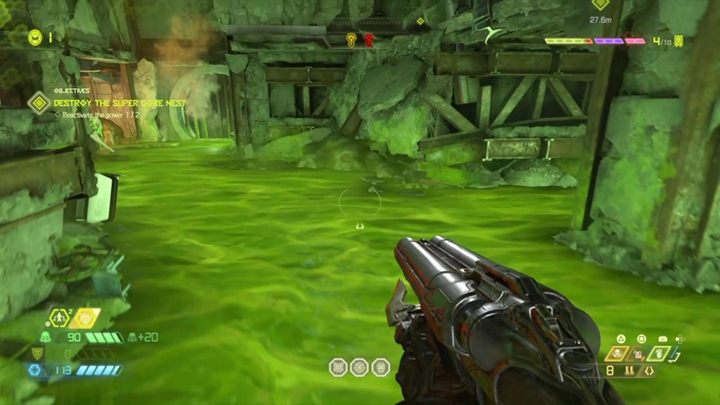 Eventually, you will reach the niche in the wall. Destroy it, go on and kill the demons. Go down and find another Rad Suit. Pick it up and go to the switch to open another cavity. 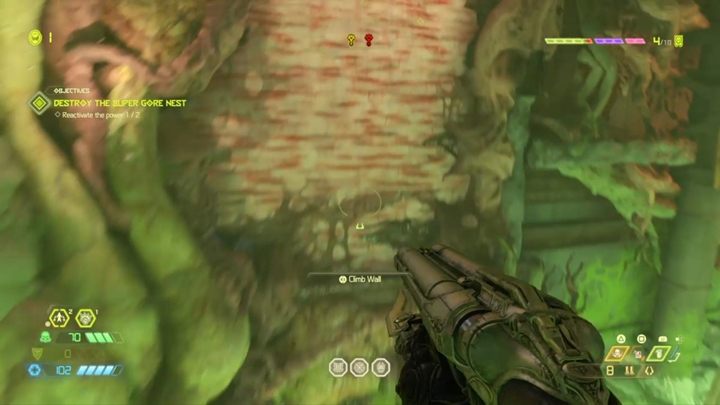 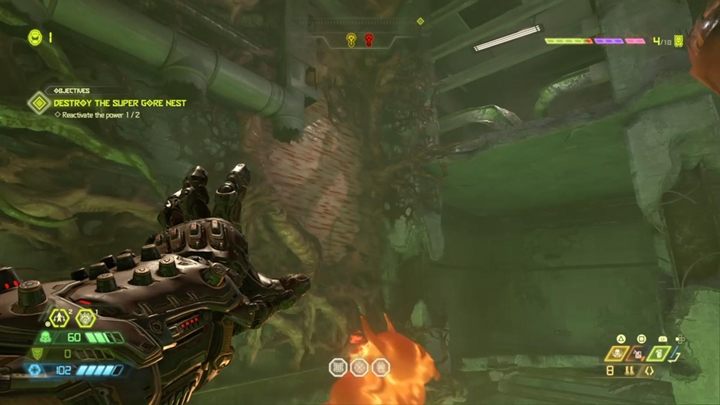 Now you need to jump, grab the wall next to the descent and jump to the next walls. You finally reach the top. Deal with the demons, destroy the wall and take the blue key. 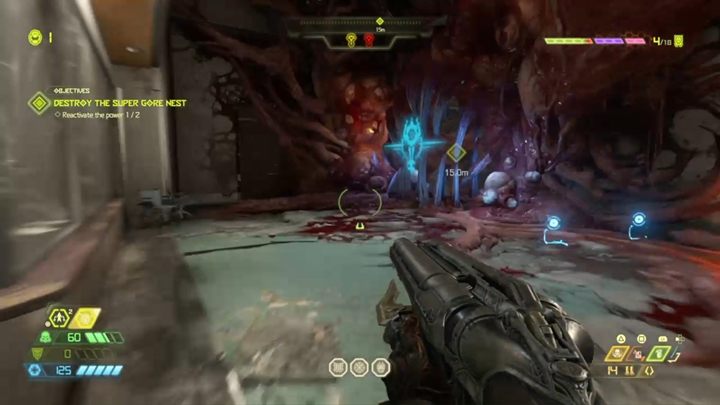 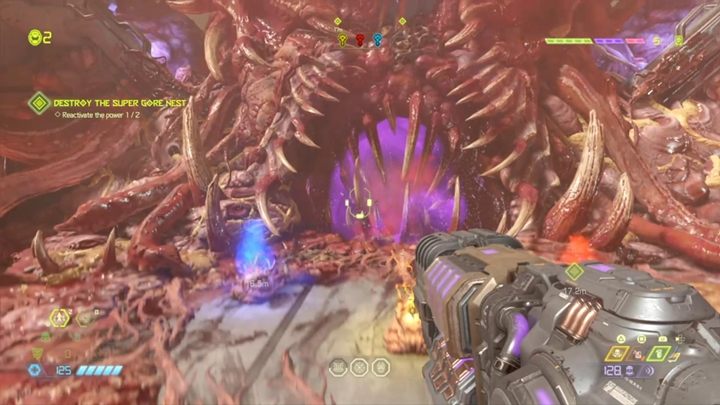 Go through the blue gate and avoid traps. Now you have to go back to the main cavity, then one that required all the keys. 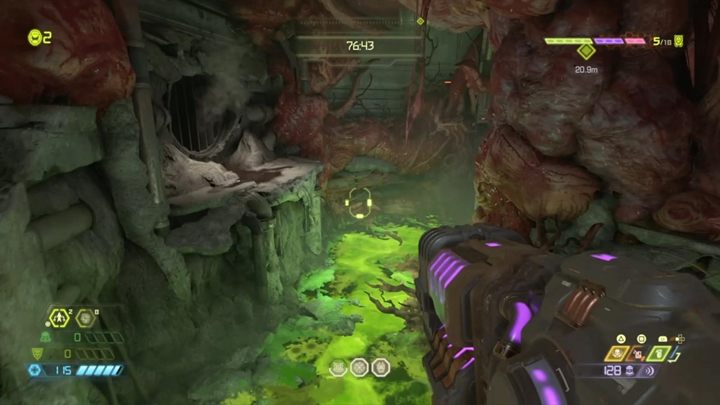 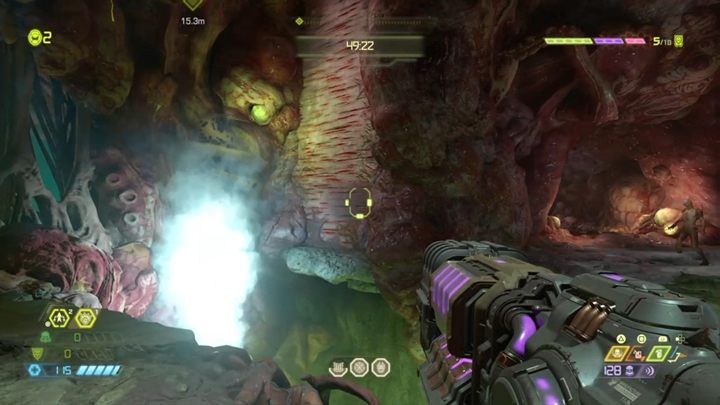 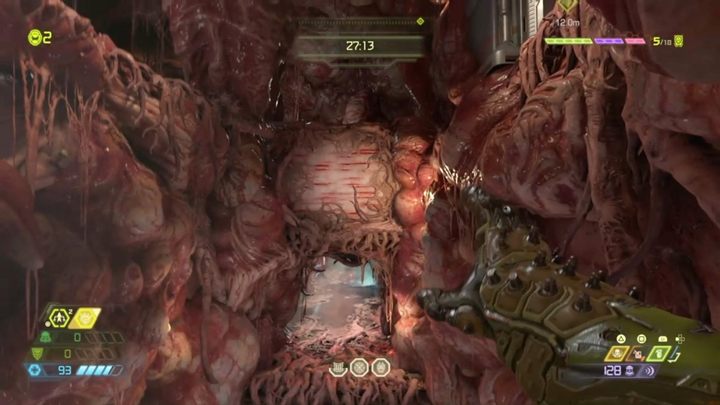 Jump down and go through the tunnels. Start the mechanisms and you will destroy the heart. This also initiates the self-destruction sequence. You have 100 seconds to escape. Run towards the marker, avoid any fights - you don't have much time. Once you enter the two teleports, you will exit the cave and complete the missions.