This page of the Doom Eternal guide has a walkthrough for the second mission - Exultia. 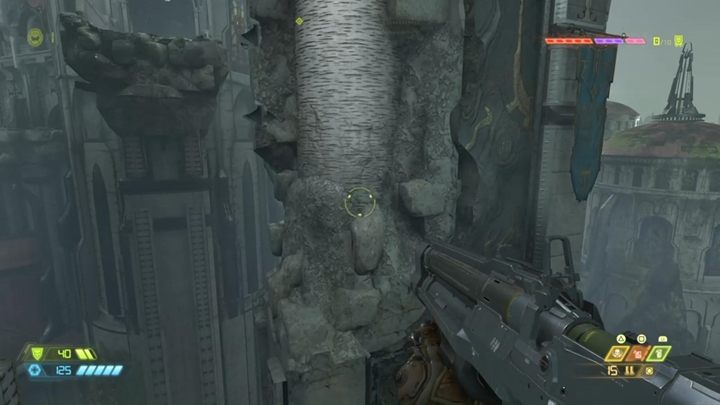 Once you start the mission, drop down to the platform below - you will get an extra life. Now jump on the wall to grab it. Look to the left and you will see another climbing wall. Jump on it, climb up and jump on the bridge with the green hound. 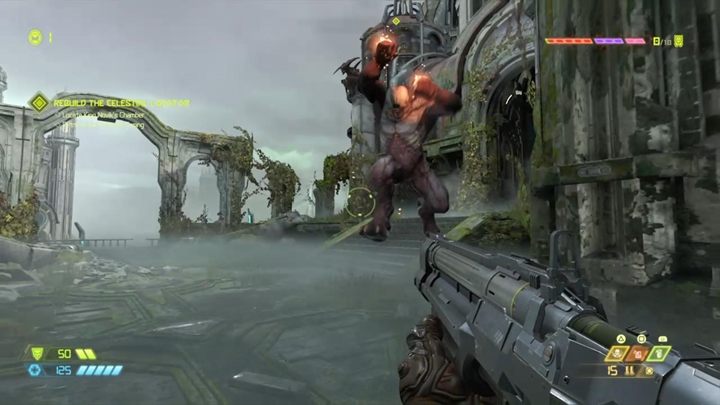 Kill enemies and move on. Time for a little bit of swinging on the protruding bars. Destroy the wall and move on. You have to fight a new group of enemies - Gargoyles. These opponents are quite weak - you can also use the chainsaw on them. At the end of the fight, a new enemy, Hell Knight, will appear. These enemies will charge and attack you relentlessly in close combat. However, they are vulnerable to the machine gun. 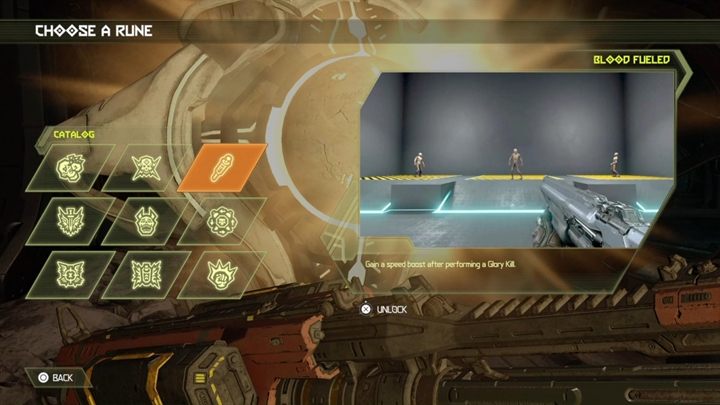 Continue walking further into the facility. Pick up a Blood Punch - it unlocks a powerful melee attack. Test it in the tutorial. Go down and fight other demons. Along the way, you will encounter a rune - it will allow you to unlock a new passive skill. 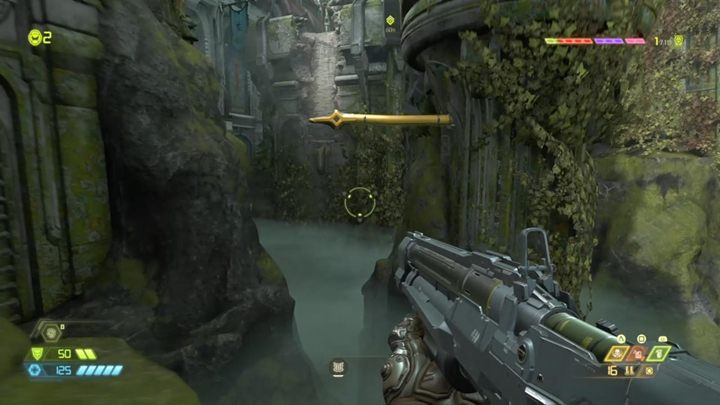 Go down and fight new opponents. After the battle, leave the room, jump to the other side of the bridge and defeat enemies. After a victorious fight, exit the building and run after the green hound. Swing on the bar and jump toward the climbing wall. Then you have to go through the door. 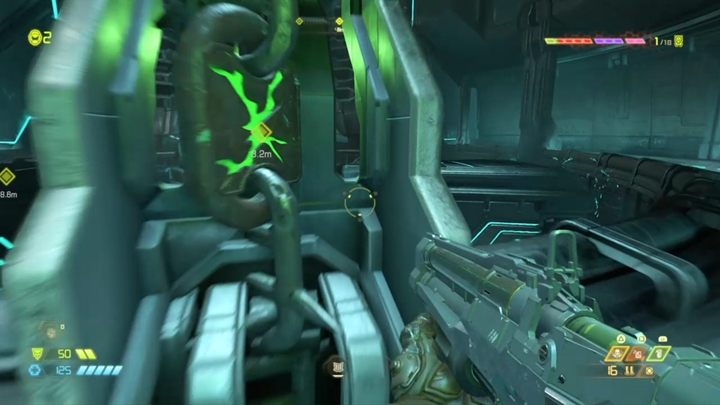 You will enter a room with rotating pendulums, go further and hit the chest at the end of the room. Climb it and destroy the chains around the chamber. You will unlock a new skill - Dash. This is a very important skill that will help you in fights and during exploration. From now on, you will have to use dashes often in puzzles and platforming sections. 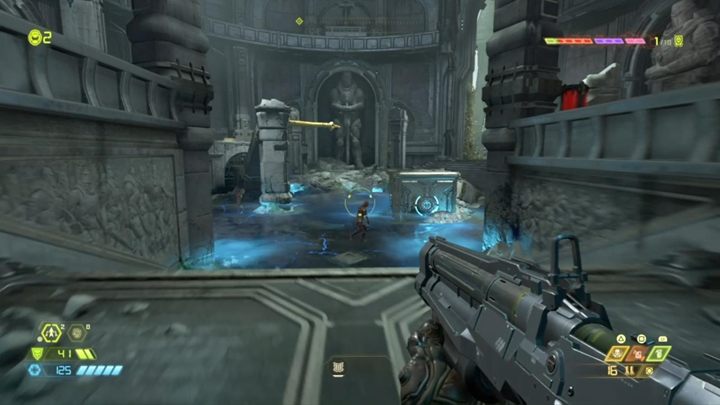 Rebuild the Celestial Locator - On the other side of the portal 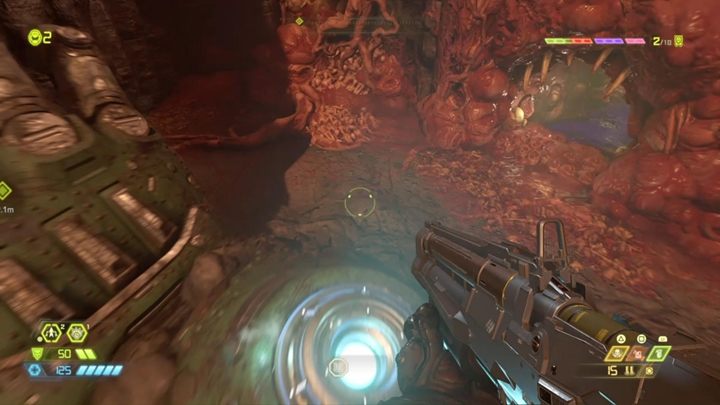 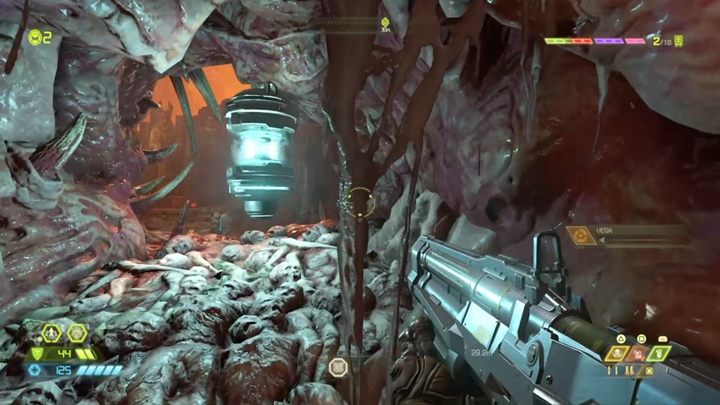 Use the dash to reach the teleport. You get a Plasma Rifle, a weapon much more powerful than the Heavy Cannon. This weapon is especially useful for the new enemy type - Revenant. It is best to destroy the enemy's guns mounted on their backs. After the fight, go into the organic cavity next to the big glove. At the end of the cave you will find an energy core. 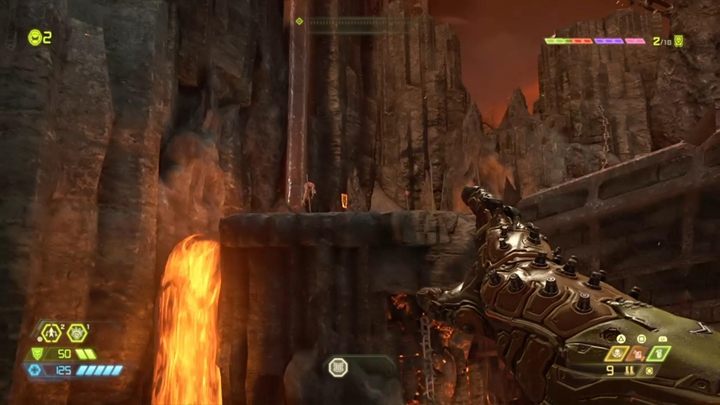 Pick up the object and insert it into a hole in a large glove - it will shoot energy and open a passage. Jump on the wall and grab it, and then make a jump up to get to the platform above you. 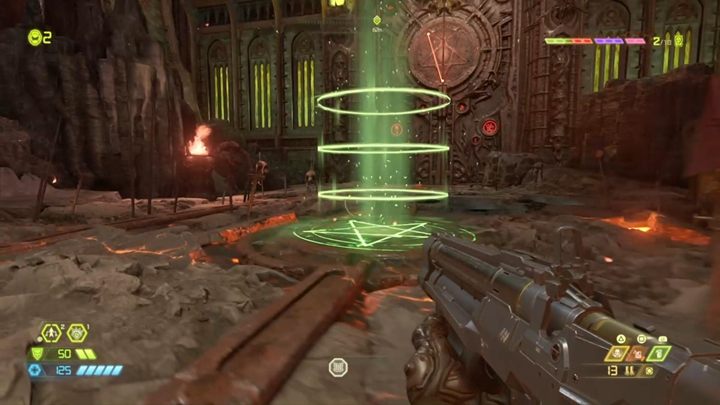 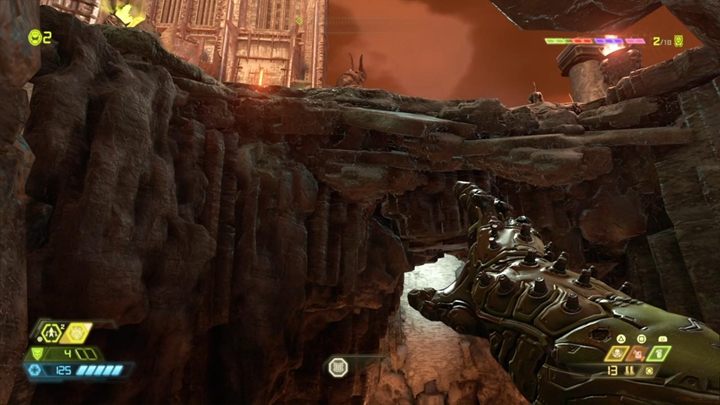 You have to press more green pentagrams on the ground. One of them will be slightly lower - you have to jump from the wall on the opposite white wall and climb up. Stand on all points, and the large gate will open. 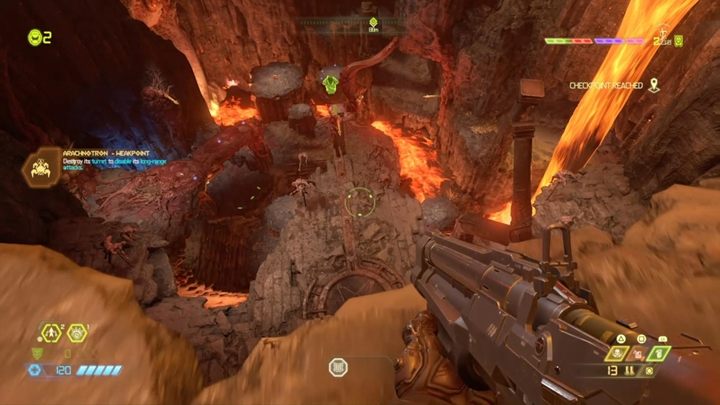 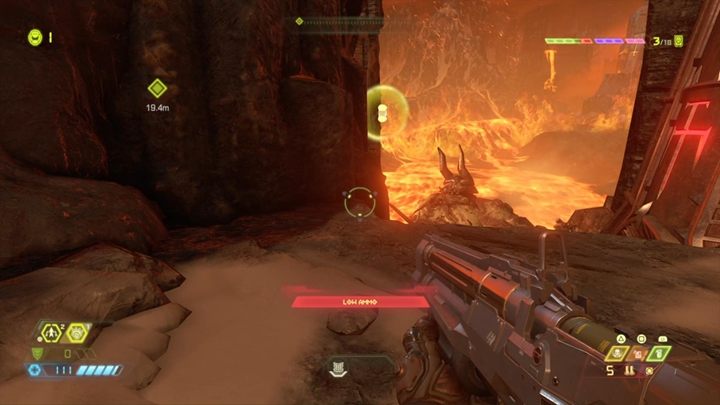 Below you will find new enemies. To move further, you need to go to the edge, jump towards the levitating collectible (this is dash refill, thanks to it you will be able to use the ability in the air again). Grab the wall, climb up the column and bounce back towards the portal. Pick up the battery, destroy the enemies and go through the cave. 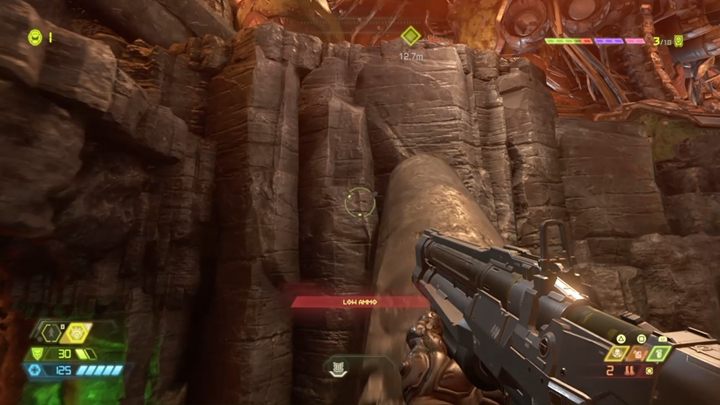 Walk on the lowered column and use the battery on the next compartment to open the passage. Enter the organic cave, fight the tentacles and destroy the wall with your fist. The hero moves slower and can't jump while he is in purple slime. 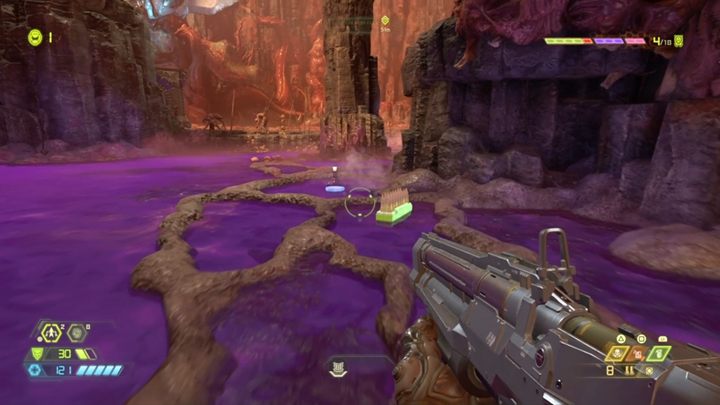 Continue your journey, watch out for the flames and kill more demons. Jump to the other side and continue along the path with the purple substance. Go through the cave and you will reach a vast area with another heart - destroy it. 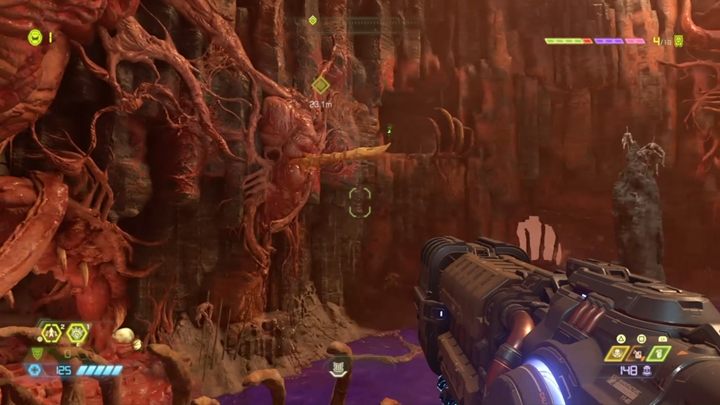 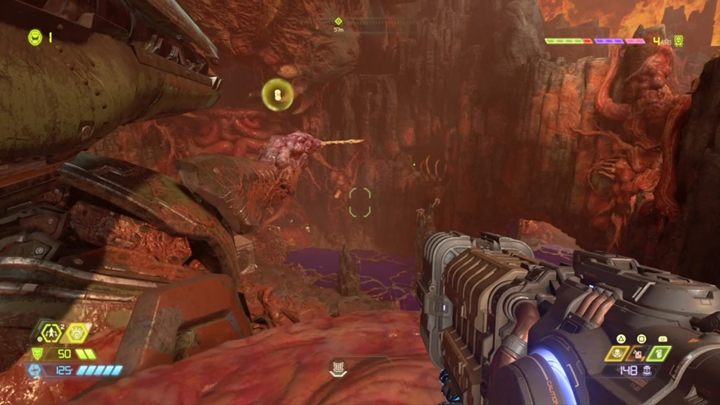 First, go to the large chest and hit it from behind to push it away. This way you can use the bar to go further and pick up the battery. Keep going up until you reach the spot where you will place another battery. Now you need to jump and grab the bar, then grab the dash refill and jump into the cave. 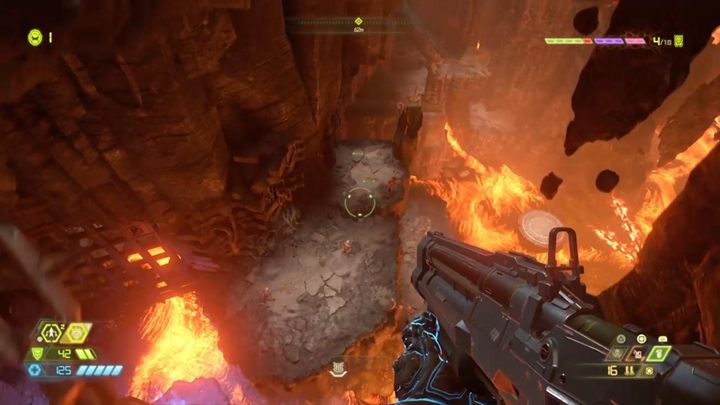 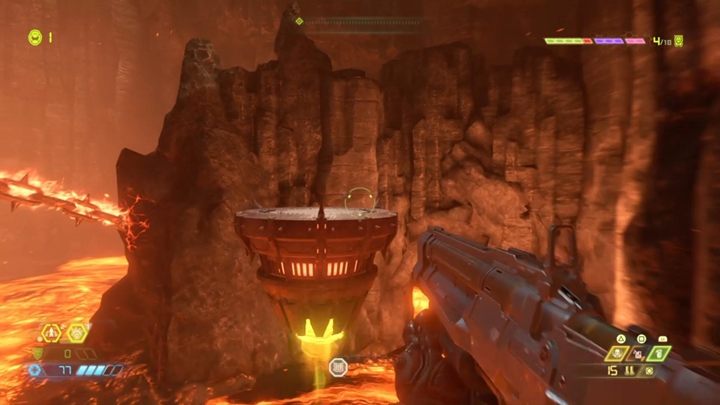 At the end of the cave, jump to the platforms below. Your goal is to jump on the shelves suspended above the lava. You can jump from them to other platforms, be careful though, because the platforms will fall after a while. At the end, climb up and jump on the climbing wall and move on. 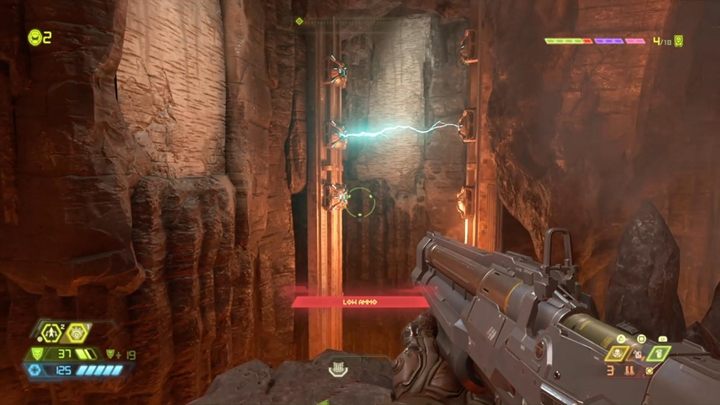 In this area, you will find the first Slayer Gate - we have described them in the separate chapter and in the section dedicated to the secrets. Go to the passageway and follow it further. Go through the electric door and jump towards the wall to grab it. From here, you have to keep jumping on other walls until you get to the top. 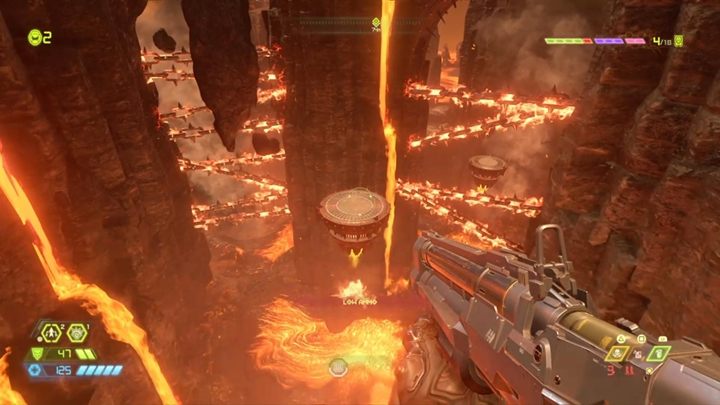 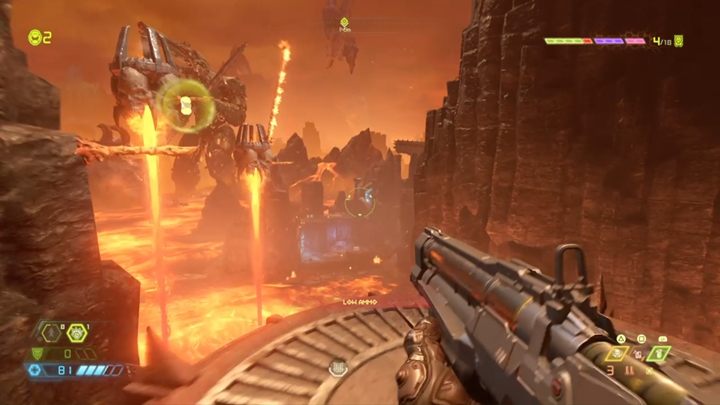 Go further along the platforms and cross the doors. You have to talk to the traitor and then go up to leave the area. You have to jump on the platforms, - this section requires some dexterity. Eventually, you will end up in a remote area. 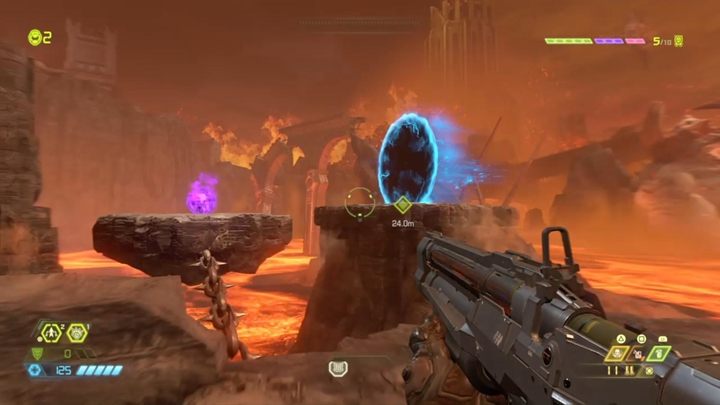 Time for another fight - if necessary, use the upgrade near the portal. Once the enemies are dead, go through the portal and complete the mission. 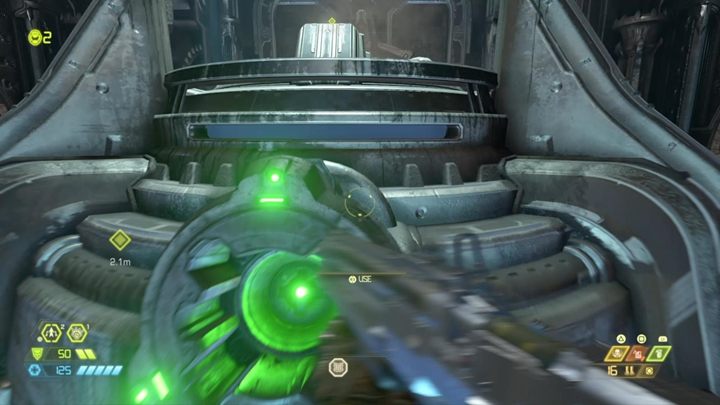 You need to restore power to the ship. Go to the compartment in the ship, use the batteries, and everything will return to normal. Go to the rack with other weapons - this time you will unlock Ice Bomb, ideal for immobilizing agile and fast enemies.

You have to go to the lower deck where you can find the training room - you can practice fighting various demons. Defeat your opponents and return to the top. Pick up Predator Suit Points and buy an upgrade. Then return to the ship's control panel, and you will unlock a new mission - Cultist Base.