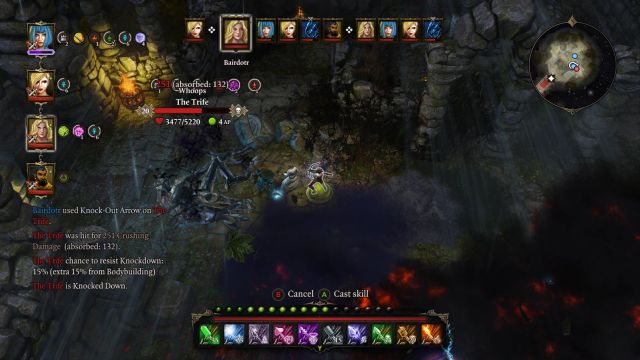 There's a lot going on the battlefield during the boss fight.

At the very beginning of the encounter, the boss will summon three demons - it's important to refrain from attacking them with characters using Tenebrium weapons, because they are highly resistant to that metal and will be healed instead. The best approach is to use your mages to get rid of the summoned foes, while your warrior and other "physical" classes are engaged in combat with the boss itself. If you are able, you can try to "clutter" the summoned enemies together (with the help of, for instance, a teleport spell and/or scrolls) and then unleash a powerful AoE spell (like Meteor Shower). A single, top-tier spell will almost always kill them all.

Trife itself is not all that powerful, because he lacks any serious damage, but on the other hand he's fairly resistant and can stun your characters with his lightning-oriented attacks (which is why a high resistance to electricity is crucial here). The boss is complete immune to air magic (as well as stuns from lightning), but all the other resistances are quite low, which means that you will be able to do a large amount of damage with the help of remaining elements.

The biggest threat is the ability of Trife to summon assistants. Those are (summoned each turn, in this very sequence): Arhu, Icara, Zandalor and Zixzax. Each one of those characters can use their respective abilities, which in turn means that they are more troublesome than the boss himself. In general:

During the encounter you should focus on eliminating the ghosts summoned by Trife (use your mages and/or a ranger with a lot of elemental arrows), and use your tank to keep the boss' attention off your party. Remember to use all knockdown effects available - the boss is surprisingly vulnerable to it, and a stunned boss won't be able to summon any assistance, making the whole encounter a lot easier.

If the encounter drags on for too long and there are several summoned heroes on the battlefield, you should focus your attention on Icara and Zixzax, who can heal others, and when they are down take care of the rest. 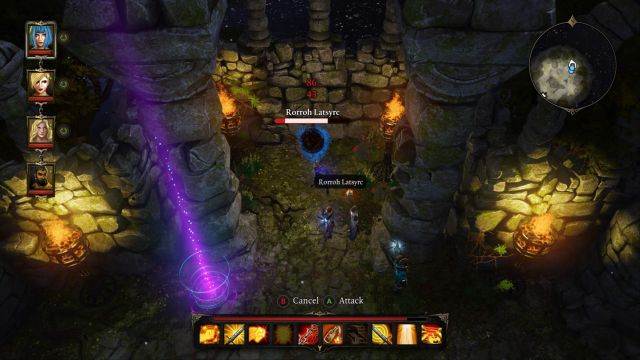 When the encounter ends, destroy the "Rorroh Latsyrc" object to move on.

When the encounter ends, pick up the items dropped by enemies, heal your party, redistribute elemental resistance potions between your character and head north, where you have to destroy an object called "Rorroh Latsyrc". After a short while your party will be transferred to the proper section of the gardens. Go upstairs and through the portal, and in the next area run down, where another boss fight, with Leandra and her underlings, awaits.