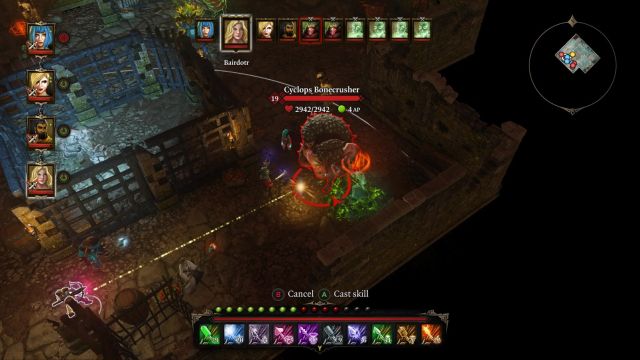 Charming the Cyclops is crucial during this fight.

Another quite difficult encounter. Balberith will be accompanied by a group of enemies - two huge Cyclops, and another pair of smaller demons. You don't have to pay much attention to the latter, as their spells aren't deadly, but the former group shouldn't be underestimated - their attacks deal huge amounts of damage, which is further increased by the fact that they are able to attack up to 4 times during their single round. A single turn of inattention can lead to the death of one of your characters.

Fortunately for you, Cyclops are fairly vulnerable to the charm effect - you can use the arrows, spells, as well as grenades to pull them on your side for a couple of rounds. This process is crucial during this fight, as the pair of Cyclops, together with the boss will be able to kill half of your party in a single round. 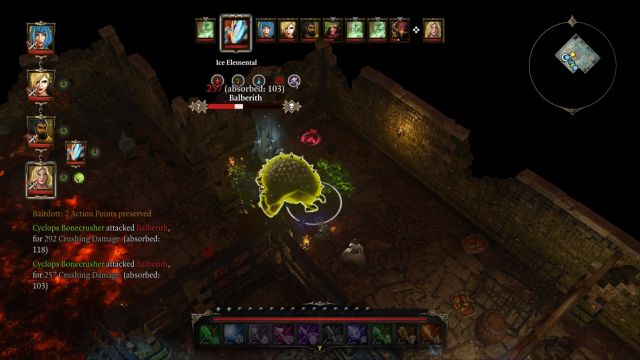 Cyclops deal huge amounts of damage, which is why it's better for them to attack the enemy, not your characters.

The key aspect of this battle are the four zombies, scattered in the corners of the room, standing on a small patch of poison. Each zombie, provided that its standing on the poison, will heal the boss by 25% of its maximum health each two rounds. It means, that with all four zombies "alive", the boss will regain full health each two rounds. The zombies are mostly invulnerable to elemental attacks - they are only affected by fire. Physical attacks are effective against them as well.

Additionally, each two rounds, the boss will summon another Cyclops (up to a maximum of 3), meaning that the faster you deal with Balberith, the better. Start off by charming one (or even two) Cyclops, and then focus your attacks on the zombies standing on the poison, to prevent the boss from regaining health. When there's only one, at most two zombies left, you can shift your attacks towards the boss - provided that the Cyclops are either dead, or on your side.