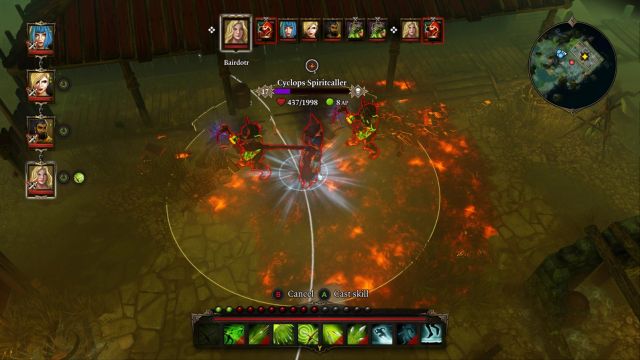 A single spell and most of the enemies are barely alive.

Possibly the easiest encounter in the game - probably because the fact that the player has access to the most powerful abilities (especially if you have one or more mages in your party), and the enemies aren't durable enough to withstand the onslaught.

You should start the encounter by casting one of the master-level spells - the enemies are most vulnerable to the Meteor Shower, as well as Hail Storm, which should take about 70% of their health, if not killing them on the spot. The main enemy, as well as the boss himself, Cyclops Spiritcaller, will be brought back to life after you kill him - you just have to defeat him twice.

If anyone is still alive after the first master-level spell hits them, you can either cast another one, use one of the area of effect attacks of your ranger, or finish the enemies off with your warrior. If you are unable to kill the enemies accompanying the boss before they are able to move, they will render the boss invulnerable - to hurt him, you have to take them out first.