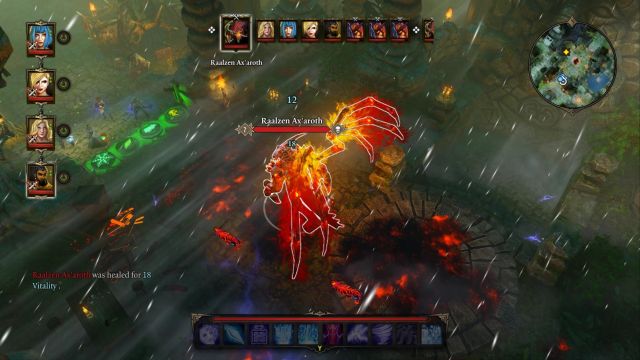 The boss looks badass, but in reality is one of the weakest in the game.

Raalzen Ax'aroth is, aside from his badass looks, one of the easiest encounters in the game. The enemy, as well as all his companions is invulnerable to fire and deals quite a lot of fire damage with his attacks, but as all fire-oriented enemies is extremely vulnerable to water spells, as well as the frozen effect.

You should start the encounter by casting one of the master-level spells - the best one is obviously the Hail Storm, which should easily take out half of boss' health, freezing him at the same time. Another good one is the Storm, which will affect the whole battlefield, dealing air damage to enemies and having an extremely high chance to stun them as well. This way you will be able to deal some serious damage to the enemy forces, without having to spend a single action point. 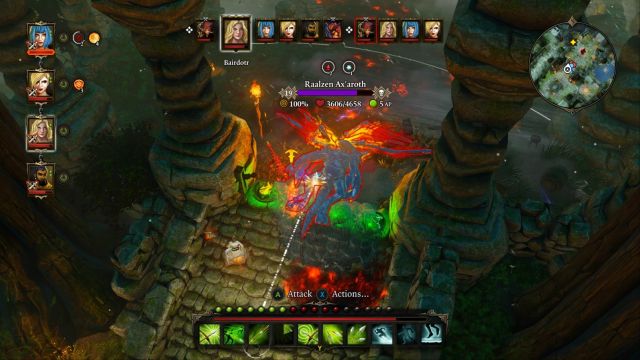 The boss is extremely vulnerable to knockdown and freeze effects.

Just like the fight with King Boreas, place your party on the stairs, and send your warrior a little to the front. Afterwards, summon a number of monsters (the best ones are the water elementals, which are the most effective during this encounter) to block the passage leading to your party. Additionally, try not to group your characters too tightly, as the boss likes to cast a Fireball from time to time. You can make the whole encounter even easier, by casting the Rain spell, which will decrease the chances of setting your party members on fire, as well as weaken all the enemies.

The biggest virtue of the boss is his durability - taking him out will take some time. You should use water spells to freeze him, as well as abilities with the knockdown effect. Don't forget about arrows and / or grenades that have the same effect.