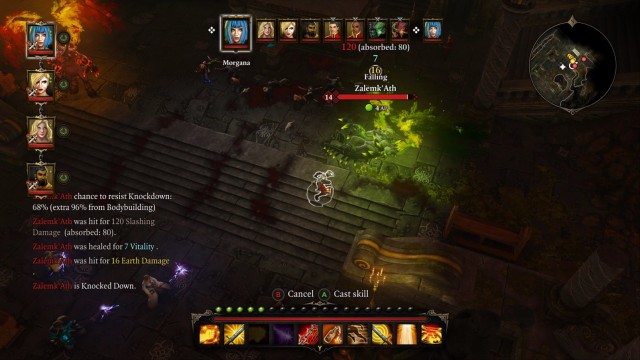 This time you will be fighting with Mangoth's servants.

One of the two encounters with Mangoth - this time with his servants. The encounter is relatively easy, provided that you have access to some summoning spells. The reason for that is the fact that the two demons you will be facing use powerful attacks from their respective elements (fire and poison), which complement each other perfectly, meaning that they will be able to deal immense damage if left with an easy access to your party.

To avoid a certain death, cast summoning spells in between your party and the bosses (a spider near the poison-type demon, and a fire elemental near the fiery one). They won't be able to deal any damage, because their attacks will mostly heal their targets, but it works in both ways and your summons will be safe, while doing their job of blocking the movement of your foes. 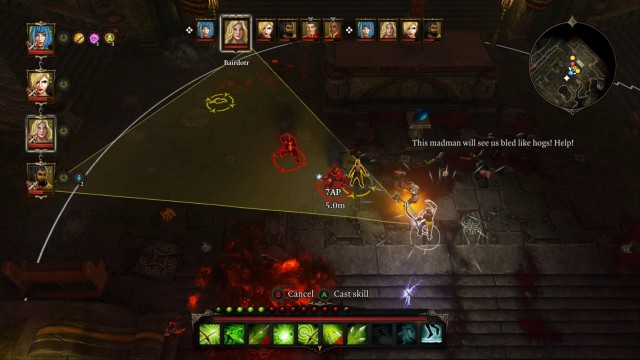 Be careful not to hit civilians - they are marked with a yellowish outline when you point at them.

Now all you have to do is to deal with the enemies one by one. There's no point in using any fire spells (and earth ones, in the case of the other enemy) during the encounter, so focus on using air and water magic, and if you have a fire / earth type mage in your party, let him focus on casting support spells. Aside from the pair of demons, there are couple of archers in the northern section of the area but they (excluding the Tactician difficulty mode) won't pose a threat to you and you can just kill them off when the demons are down.