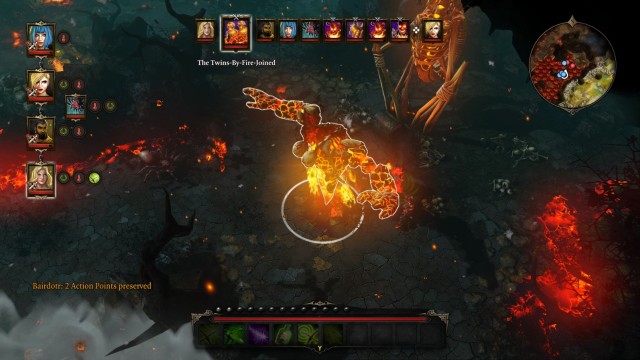 As soon as the enemy stops moving, it will start the "charging" - you must immediately stun or freeze it!

The Twins-By-Fire-Joined is a boss that you will encounter on the scorched earth, filled with lava, near the city of Cyseal. It's not a boss that is required in order to complete the main story, but defeating it may prove quite difficult to an inexperienced player.

The boss is accompanied by a group of burning skeletons, which will try their best to make the fight more difficult. There's no point in concentrating your efforts on them, as even when you kill them, the Charred-Bone Idol located to the north of the boss will resurrect them every 4 turns (fortunately they won't have full health). It's more important to focus your attacks on the boss.

As you've probably guessed, all the enemies here are invulnerable to fire (fire-based attacks heal them instead), which means you have to use other elements, as well as physical attacks. The boss, aside from using normal melee attacks (which have a chance of setting the target on fire), will use the Fireball and Burning Touch spells (the second one often used to heal the boss itself). It's advised to scatter your party, instead of keeping them in a tight group.

The key moment is the one in which the boss stops moving and starts "charging" - it won't be moving and attacking during that time. After three rounds of standing still, the enemy will cast the Meteor Shower spell, which will kill anyone in the area of effect, regardless of your fire resistances (which are low at this point in the game). To avoid this, you have to stun, knock down, freeze or chill the boss with your spells and / or abilities - thanks to that, the boss will stop charging its attack. Additionally, remember that the boss will explode upon death, dealing fire damage to nearby units. 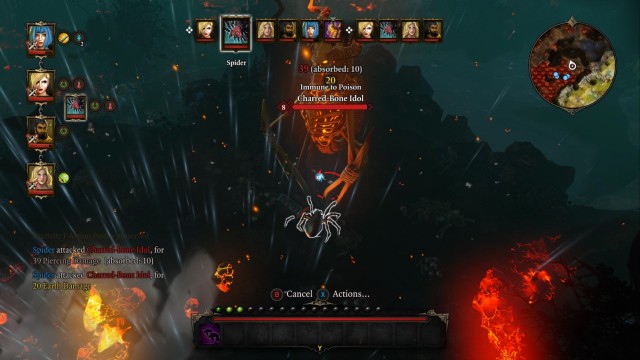 Charred-Bone Idol causes fear effect to those who approach it - summoned units are not affected by it.

When you've dealt with the demon, start eliminating the skeletons that were accompanying it, and when those are "dead", concentrate your attacks on the idol mentioned above. It's hard to approach it, as it will cast a spell that causes the fear effect, but one talent (Courageous) will make a character immune to it. You can, of course, destroy the idol from afar, with ranged attacks and spells. When it is destroyed, the battle will end.