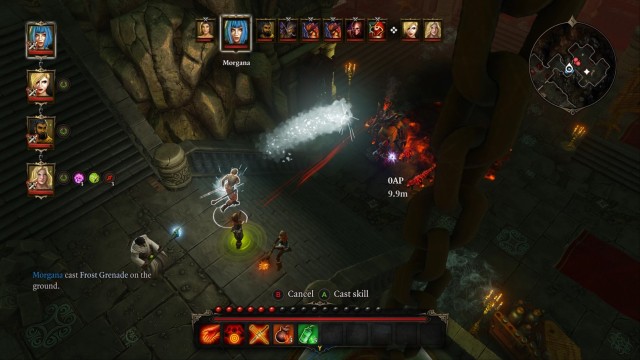 Frost Grenades are the best weapons for this battle.

Evelyn is another boss which, without proper preparations, may be annoyingly difficult to defeat. The encounter starts in a closed space (on the stairway), but on the other hand the enemies will be coming from a single direction, rather than attacking you from all sides.

At the very beginning of the fight Evelyn will summon 5 allies, but this time those summons are the real deal - two of them (Enslaved Cycops Wizard and Blood-Wind Demon) have immense amount of action points, allowing them to cross the whole screen and still be able to deliver a number of attacks. Additionally, they are immune to fire, which, because of your lack of powerful water and / or air spells at the moment, is another factor making this whole encounter a difficult one.

Aside from the enemies mentioned above, Evelyn summons a mage, who can be ignored (unless you are playing on the "Tactician" or higher difficulty level, in which case the mage will spam crowd control spells all the time), and your focus should be on two Demonic Rams. Those aren't the most powerful foes you've ever encounter, but killing them results in an explosion, which will heal most of the nearby enemies (aside from Evelyn) and deal some serious amount of damage to your party. You should either eliminate them quickly, or at least prevent them from getting close to your characters.

Because of your lack of water spells, you can use the scrolls containing those said spells (if you don't have them, see the Crafting section to learn how to create them), or use Frost Grenades. If you don't have those either, you should prepare them (together with a Thunderbolt Grenade - both recipes can be found in the mentioned Crafting section) before attempting to fight Evelyn. Frost Grenades are able to deal quite a high amount of damage to the enemies and have a 100% chance to freeze them, excluding them from the fight for a couple of turns. You can then throw the Thunderbolt Grenade, which will deal air damage and create static clouds, stunning everyone in the area (including Evelyn, who is exceptionally vulnerable to knockdown and stun effects).

Afterwards, all you have to do is to take care of the enemies from afar, without the risk of getting stunned from your own grenades. If you, however, lack the necessary grenades, spells and scrolls of water magic, you should set your fighter in front of your party, and summon a create next to him to block the passage, preventing the enemies from going into close range with your mages.

Tactician Mode introduces a single novelty. At the beginning of the encounter, Evelyn will cast Shackles of Pain on one of your characters. The spell causes the marked character to receive the same amount of damage, that you are dealing to Evelyn - which in most cases ends in the death of your character. The spell can be dispelled with the help of spells, or by walking far away from Evelyn, which will break the spell.