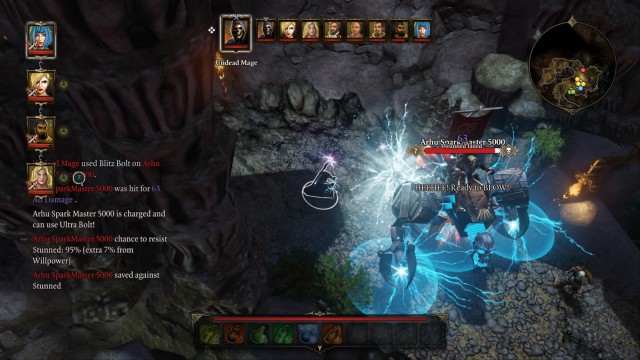 Mages located behind the boss use air spells to charge the enemy.

Arhu SparkMaster 5000 is one of the most unique bosses in the game, as there is another way of dealing with him (aside from killing him, of course) - by using a special device, which can be acquired during the conversation with Arthu, inside his laboratory. Additionally, the device itself can be picked up from the mentioned laboratory, even if you didn't get it during the conversation with the mage.

After acquiring the required controller (Remote Controller), you will be able to cause different effects by issuing the following orders:

However, if you don't have the required controller (or if it's not working, which the game has problems for months now - a side note from the Author) you will have to face the enemy and its allies in combat. Arhu Sparkmaster 5000 will be fighting alongside two mages (which will use air spells to charge the robot) and an archer. The player won't be alone during this encounter - a few NPC characters will join your side. 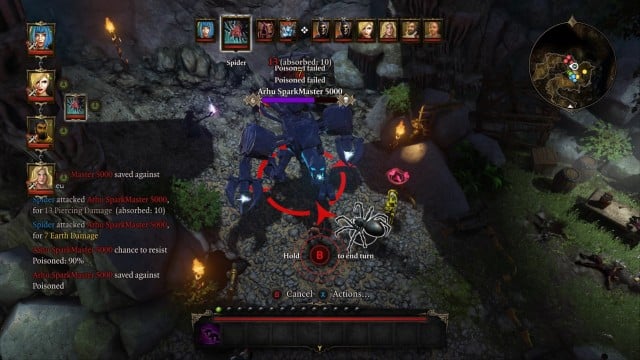 Remember to prevent the boss from moving at all Times - otherwise it will use its lightning attack.

There are two things to have in mind during the encounter. You have to stun, knockdown, or freeze the enemy all the time, because after a number of turns when its allowed to move, it will perform a deadly lightning attack, which will kill most (if not the whole) of your party. There's no protection against this spell - no amount of health, or resistance to air will help you, your characters will be killed either way. The only solution is to prevent the enemy from moving at all times - fortunately for you, it's quite easy to achieve, as the boss lacks any resistances.

The second problem are the mages. They charge the boss, and when its health drops below 50%, they will cast a powerful healing spell on it, which will restore most of the missing hit points of the enemy. When the boss is immobilized, use the little time you have to deal with the mages - they are quite squishy, so it won't take long. When the mages are dead, focus your attention on the archer and the boss.

The Tactician Mode introduces two crucial differences into the encounter. The first one is the fact, that the mages charging the boss will be standing behind it, on the other side of the battlefield, which means that getting to them will be a lot more difficult. The second novelty is the new attack performed by the boss, in which it marks the area, and after a round launches a barrage of rockets, dealing fire damage. The attack can be easily evaded - you just need to get your characters out of the marked area.