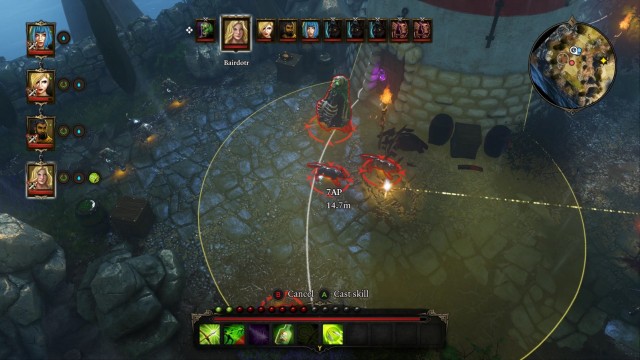 Try to deal as much as damage as possible before enemies scatter around the battlefield.

The first real boss in the game, The Ghoul That Guards the Lighthouse will probably be also the first "wall" in the game you encounter, as the difficulty level during this fight is many times higher than your previous encounters. The entire fight starts with the battle shout performed by the boss, which increases the attributes of its allies, and the boss itself will most probably perform its unique attack - it will teleport near your characters, hit them a couple of times and then retreat to his starting position, preventing you from launching a direct counterattack.

To make the whole encounter a lot easier, you should focus on the dogs (Lupine Horrors) summoned by the boss. They won't be able to deal a lot of damage, but every additional target may become a problem, especially when the dogs are able to get near your mages to prevent them from doing their job. When you kill the dogs, the boss will summon them again, but don't worry about it, as it will happen once only - when the second group of dogs is slain, they won't be returning anymore.

Aside from the boss and his summoned dogs, you should pay attention to a pair of skeletal archers, located on the opposite side of the battlefield. On the "normal" difficulty they won't pose a threat, but if you are playing on the "Tactician" or higher, they will constantly fire elemental arrows at you, dealing quite a lot of damage and applying nasty negative effects along the way. If you have the opportunity, limit their visibility by throwing a smoke grenade, or by spilling and setting oil on fire - they will have to get closer to you in order to do anything, exposing them to your attacks. 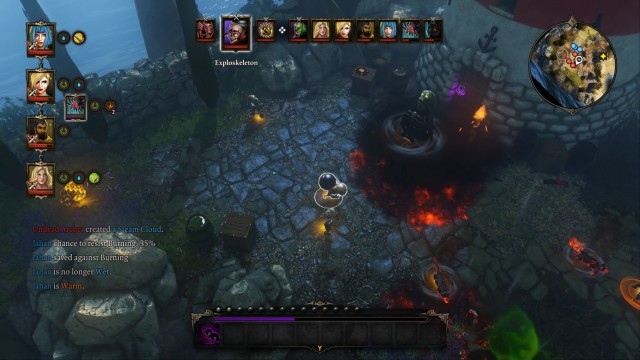 Watch out for the explosive enemy - a moment of inattention may cost you the lives of your characters.

The last thing to watch out for is the explosive enemy (Exploskeleton). As soon as the tiny little fellow gets near one of your characters, he will detonate, dealing immense damage (killing one or more characters along the way). To prevent him from doing it, you can simply kill him, or use any spell from the water school of magic, which will apply the Chilled status - this way the fuse on his bomb will be extinguished, preventing him from exploding.