Trader: Nurt - weapons of Tenebrium (orc stnds under a roof of building)

Trader: Horun - ingredients for crafting and magical weapons and armours

Bridge
Quest: For Whom the Troll Tolls - after conversation with troll on the bridge

Fountain
Quest: To Be, or Not to Be - form skeleton near the fountain

Warehouse
Quest: War of the Stones - quest from Jahrl

Tavern
Quests:
Distill My Heart - from bartender Hershell
Trader at the back-alley - tell Grutilda about illegal trades of orc Nurt
Revenge of Source Hunter - if you've Madora in your team quest would begin after entering the village; target is located on a first floor

Quest: Star-crossed lovers - from orc outside the building

Knight's Tomb
Quest: The Watch is Coming - in the tomb you'll meet two guardians, which will give you this quest

Hut on swamps
Quest: The King's Dark Deal - quest available, if you have in your team Jahan
Continuation of the quest Follow The Wizard

3  Entrace into a temple

5  Cassandra - continuation of the quest A Forge of Soul 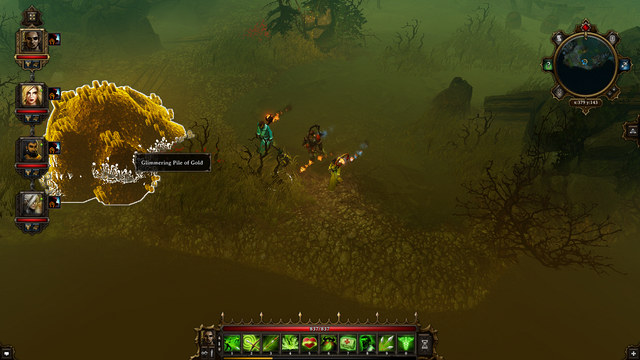 The heap of gold in the swamps

9 - the heap of gold with wizard Bellegard hiding under it. After the conversation, you will gain access to a new teleportation point- Bellegard's Maze. After you get to the maze, you will notice a chessboard and three levers. Each of the levers frees another animal: a rat, a cat or a dog. Your task is to conduct the swaps of the animals so as to reach the field highlighted in green, with any of them. Each of the points opens one door with valuables behind it. 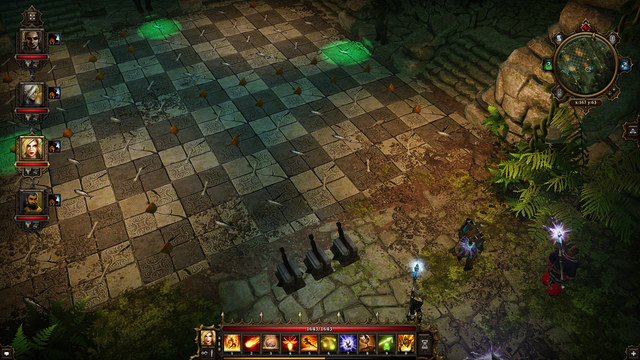 Strategy is the key to solve the puzzle. The cat eats the fish, the dog eats the bone and the rat eats cheese. After the animal eats food and progresses to the next field, there appears another food, at random, in its place. Therefore, there is no one right solution to this puzzle and the player needs to try on his own.

10 - Knight's Tomb. To get inside, you need to pull the three levers on the left, on the right and in the middle, next to the statue. Do not enter if you do not have the "Titan Dictionary" on you, because you will then have to fight a very demanding fight with the stone guardians (still, you get lots of experience after you defeat them). 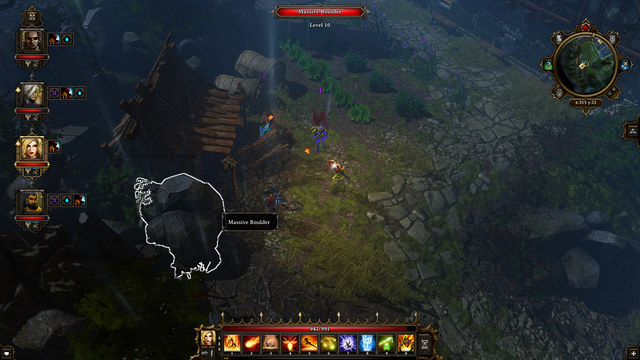 The stone covering the manhole

1 - the hiding place of the villagers appears on the map after you complete The Hun in the Hunter's Edge quest. It is a manhole hidden behind a large boulder, at the Western wall. You need to destroy the stone, because the manhole is under it. 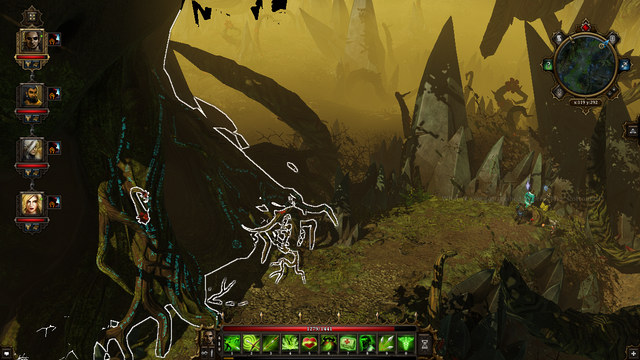 4 - The Kickstarter tree, the place where Weresheep appears. There are several steps that you need to take, to complete this quest, but the matter of the fact is that you only need to get to this tree and place the Stardust Herb right in front of it. Then, there will appear the sheep, which you can convince to lend you its fleece, or kill it and take the fleece yourself.

Merchant Nurt - a Tenebrium weapon merchant hiding under the roofing (2). After the conversation, you will be able to tell on him to Grutilda. If you intend a lasting exchange of goods, do not do that because he will not be capable to barter after you turn him in.