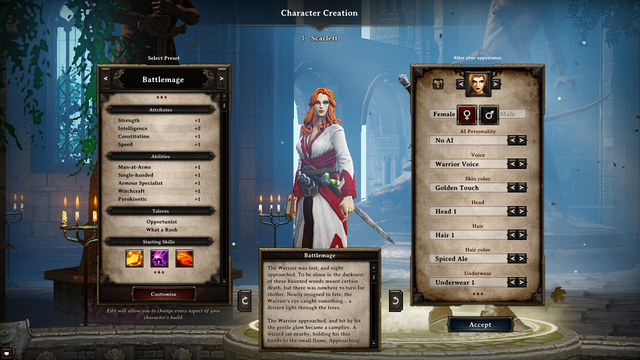 Selecting of base categories

With time, as your character progresses, you will be receiving additional attributes, skills and, sporadically, talents to distribute. It is important to distribute them with consideration and make the character the specialist in its own field. What the individual parameters refer to, can be read in the chapter entitled "Abilities, talents and attributes" - the chapter focuses entirely on which attributes should be selected to make the character as good as possible. The division has been simplified to 5 character classes: fighter, archer, wizard of the elements, battlemage and the rogue. OF a character has more than one class, try to develop, in the first place, the abilities that are common to these classes and then, the parameters characteristic to a given class.

The main attribute of the fighter is Strength, which influences his ability to deal more damage, carry tougher armors and swords. Then, there is the movement speed, because you need to reach the opponent and have enough points left to deal a blow. That is why, you need to develop Speed and Constitution also. As for abilities, - the leading one is Man-at-Arms which allows you to use books and new abilities. Then, it is a good idea to ensure that the character is capable to endure in the battlefield, which is why the Body Building and Armour Specialist skills are irreplaceable. Also, it is a good idea to put some points, occasionally, into Willpower. If you are playing as a character with a one-handed weapon and a shield, from time to time, you should also add points to Agility and the Shield Specialist skill.

The talents that it is a good idea to attribute, apart from the ones that depend on the ability, are: Bully, Lech, or Courageous - this provides you with resistance to Fear, but makes you unable to flee from the battlefield. It is a bad idea to add the attributes connected with magic (like, e.g. Elemental Affinity), or My Precious that is attributed by default - it provides you with a 50% chance not to damage the armor after a blow - the repairs are cheap and they do not wear off that quickly.

While creating a ranger, you need to decide whether you want to play as the archer or the crossbowman. The bow requires 3AP to attack and the crossbow requires 4 AP. Additionally, the range of the bow is longer and there are much more of them in the game world, however that attack value can be, even, three times as low, at the same weapon level.

Archery uses the Expert Marksman ability, which is in turn based on Agility. At the same time, you need to develop Perception, for your attacks to be more accurate. Additionally, this ability needs to be raised, depending on the preference for bow/crossbow. Apart from that, the archer character dies nit require any additional attributes/abilities. By default, he has the abilities of blacksmithing, crafting and identification- abilities which are good if developed because, unlike the other characters, he often has quite a few spare Ability points to distribute. If, however, you decide not to go for that option, it is a good idea to dual-class this character - the rogue or the battlemage.

The preferred talents (apart from the ones that come with the Expert Marksman) are Arrow Recovery, Bully, Light Stepper - because the character, usually, has a well-developed perception and Stench - so that a character with lower constitution and resistance is not attacked too often. Also, choose Scientist, if you still you decided to develop the Blacksmithing and Crafting abilities.

Rogue is a minor specialization that can be combined with another character class. The class is based on Agility, but also Speed is of high value. The preferred weapon is daggers, which is why you should raise the Abilities to fight with one-handed weapons and the leading ability - Scoundrel. What is also preferred by this class is Sneaking, used to perform sneak attacks from behind.

Apart from the talents connected with the development of the Abilities, it is worth assigning Bully, Leech, and Stench talents - often, the character's constitution is not too high and it is better if it is not cornered by multiple opponents.

As it has been stated earlier, it is best if the wizard specializes in two related elements, i.e. earth and fire, or water and air. Thanks to this, he will be able to poison an opponent and blow up the poison within one turn, using fire. The wizard, if he uses two elements, most often does not require development of additional abilities not related to these specializations.

Mages should develop abilities connected with their element(s). At a later stage of the game, after you obtain the highest possible level for those abilities, it is a good idea to add by 1 witchcraft point - this allows you to wield some very useful spells, like e.g. Destroy Summon or Resurrection, with the penalty to AP, which are sill profitable, due to the potency of these spells.

The selection of talents, apart from the specializations is wide for these characters. It is a good idea to obtain, initially, the Elemental Affinity talent - it provides you with -1 AP, if you are standing on a surface that is the same as the spell that you use. Then, Know-it-All that adds 1 Intelligence, at the cost of contacts with NPCs - which is why, you should not choose the character that most often talks to people, for that reason. Additionally, Far Out Man that allows you to use spells and scrolls at the distance of +2m.

Just like wizards, he bases on the Intelligence attribute, but it is a good idea to combine that class with another one, like e.g. fighter, rogue or even the ranger. Then, you can distribute the additional points to the other specialization, where in the Battlemage specialization you develop Intelligence and Witchcraft only. Battlemages have several specific abilities, like the Destroy Summon and Resurrection, in the first place. This is why, even if you do not create the Battlemage as the character class, determine, at least, one point for the character with lots of spare points, e.g. rogue or ranger.

Talents that can be well attributed to this character are Far Out Man, Know-it-All, Bully and Courageous.