Just like in nearly every RPG game, you start off by creating your character, select its looks, class and the base skills/attributes. In Divinity, there is no direct division into classes - what you can find here is just a suggestion from the developers in which way to develop your character. Still, this is absolutely player-dependent. The class that you pick determines the initial equipment, skills and attributes, which can be modified, by pressing "Customize" in the character creation screen. 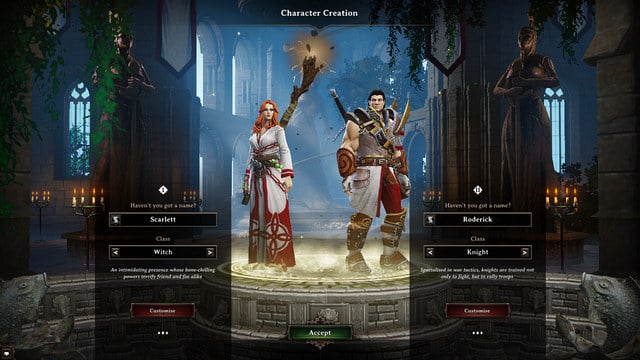 First of all, you create two main characters. Already here, decide whether you want to play as a part of a bigger party (of up to 4 characters), or you will stick with the initial couple. In the case of the latter, select the "Lone Wolf" talent, thanks to which your character will receive more health points, will be faster (more AP) and receives an additional point, while leveling up.

The most effective party should include two wizards where one of them wields fire and earth, whereas the other wields water and air. Looking through the prism of the two allies that can join you - Jahan is the water wizard and Madora is a fighter. Also, if you stick to the assumptions, one of the characters that you create should specialize in fire and earth magic, whereas you should define the other according to your preferences. Still, it is a good thing if the character classes are not too similar, which is why the battlemage, archer rogue, or another melee fighter, with an additional specialty, is chosen.

Right at the very beginning, you should decide which character is going to handle the additional activities, such as Crafting, Blacksmithing or Loremaster - identification). Of course, you do not need to teach these skills to any of the characters but, it is a good thing if one of the characters has them. You can also distribute these skills to the individual characters. Still, the preferred thing is that you have one less character that you develop (e.g. the archer is good for that, whose talents, apart from the bow/crossbow specialization, as well as Expert Marksman, you do not need to develop), because clothes and talents improve these talents in group. It is good for one of the characters to become the leader (the Leadership skill). This skill, when raised to its maximum, provides very strong buffs for all the characters around the leader - the buffs for this skill do not accumulate.

All of the skills, apart from the weapon and defense specializations can be raised, at most, to the fifth level. Therefore, all the surplus, once the character is fully developed in his specialization, should make it into those two categories. Unless you decide to start a new specialization for the character.