Place: Smithery
Traders:
Nadia - not magical armour and weapons
Bjorn - also armour and weapons, only if you rescue him (The Escort Job)
Quest: The Naked Truth - you'll recive that quest in conversation with Nadia

Fumble troll  Quest: Beauty and the Beast - you'll get this quest after conversation with troll.

Place: Crossroads
Quests: From Bjorn:
An A-mount of Healing Magic
The Escort Job

Quest:
The Angry Troll - from the troll Grumble

Place: Road on a desert
Quest: Both from Frederick
Frederick's Blood Stone
Slaves and Masters

Place: Witch's Cabin
Quest: Fun with Fungi - from mushroom next to cabin

Goblins' Village  In the middle of village you'll find a totem - destroy it to get a Blood-Stone. 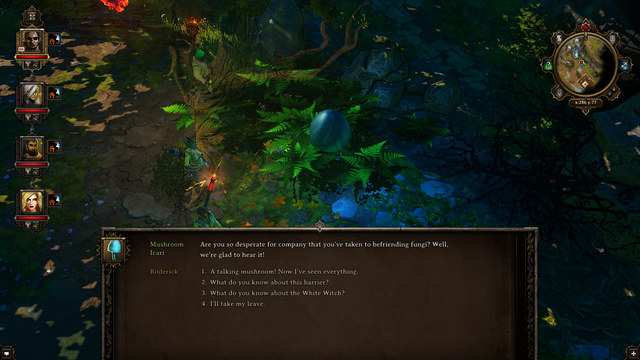 The Witch's cottage- the cottage is surrounded by a magical barrier. The fastest way to remove it is to destroy the two Icari mushrooms (without using magic - this is what clones them) to the South and to the North of the cottage. Inside the cottage, there is a descent into the underground and a passage to a tunnel, which is activated with the button on the left wall. The tunnel goes to the rift that teleports to Hiberheim.

Goblin Village - you can talk to the goblins amicably and you will be granted a safe passage across the village but, if you want to take the Bloodstone hidden in the totem, you will have to fight for it, against the entire village.

The Tavern - at the tavern of Silverglen, you can buy virtually all of the useful items. Do not forget to check out the cellars (the entrance under the stairs and in the room, behind the counter). On the first floor, in the room on the left, you will start the "Bicky the Bomber" quest -do not enter the room, but use the bucket with water or the rain spell - you will then prevent the suicide detonation and you will save the girl.

The passage to the Phantom Forest - the Northern and the Southern passage are accessible for all. They end in nearby places, in the next location so, they do not matter that much but, if you do not want to fight the troll or pay him through the nose, , take the passage on the North, next to the village of the Immaculate.

Void Bloodstone - in the "Closing the Rift" quest, you need to destroy the stone behind the lines of the immortal demons. Make it over there, without being seen (use the spell, or the potion of invisibility). This quest is necessary to push the storyline forward. The Bloodstone itself can be destroyed ONLY with a Tenebrium weapon. If it deals additional damage from magic, they will heal the stone. That is why, you should find, or purchase, a version of the weapon without enchantments on it. Later on, you will not have to fight monsters - they die with the stone itself.

8 - Madam Loenestra - she will sell to you secrets, not in the form of maps, but rather ones that become apparent from the conversation. They are quite expensive and many of them concern further locations. Note to remember - during the conversation, she will also offer to tell you the future - do not use that option. It will prevent you from buying more secrets, and also you do not profit from it. The fact is not even included into your journal.