During your journey, Jahan will tell you about his task to kill a certain demon called Balberith. The demon can be found in the Dark Forest, but only during the "Follow the Wizard" quest. During the conversation with the demon, you can either give Jahan to him, kill another demon for him (if he asks for it), or to kill the beast itself. In the first choice, Jahan leaves the party, and the demon will turn him into a Cyclops on his services. The second choice ends the quest, too, but Jahan won't be satisfied, and in the third scenario - killing the right demon - Jahan will be pleased with his revenge. 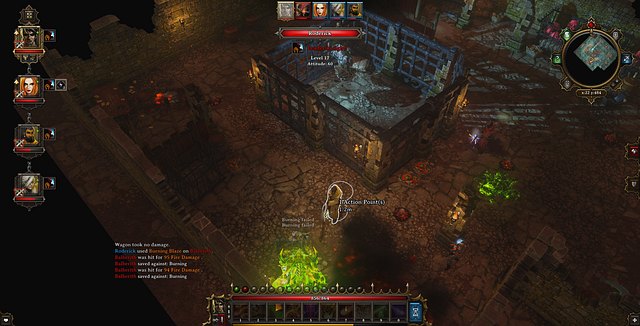 The fight with Balberith.

If you received a proposition to kill Raazen Az'aroth, who can be found in the North, and you accepted it, go to the upper parts of the map. Between the ruins, you should be able to find your target. It's a demon of fire affinity, and all the elements, besides fire, work on him perfectly fine, especially water. Additionally, it's a good idea to take care of some fire resistances. Finally, you should first focus his underlings, because they explode upon death. It should be done from a safe distance.

If you decided to fight the Balberith itself, this fight is a little bit different. The demon will summon 4 souls, which will make him almost invulnerable to everything. Your weapons and spells should be able to do something, but it's rather minor damage - besides, the demon will heal himself as long as the souls are there. The three of your party members should keep the demon occupied, and the fourth one should go and deal with the souls. They won't attack, but Balberith itself will summon Cyclops from time to time, and you should deal with them constantly (he will summon a total of 4 of them). After killing the fourth soul, the fight will gain momentum, as the demon itself will be more aggressive, but he will finally start losing his life a lot faster.