After completing the quest, in which you had to find the witch, she will task with finding a specific wizard, and will give you a ring, which may help you with it. Go to the location called "Dark Forest" and the city in there.

Inside of the wizard's house, located to the Easy, there will be a set of barriers, impossible for you to cross - you will first have to complete "The Hunt in Hunter's Edge" quest. Afterwards, you must find the "Phantom Protection Amulet" inside of his house, located on the second floor, in a gem chest. The amulet will protect you from the negative influence of the forest.

Get back to the very beginning and set your steps towards the right side of the map. You should be able to see a felled tree, which will allow you to enter the forest. Select the character who has an invisibility spell / scroll, teleportation pyramid and "Phantom Protection Amulet" and use him / her to get inside. You must find a rune, which is in possession of the ghost of the forest. The rune itself will allow you to enter the "Source Temple". 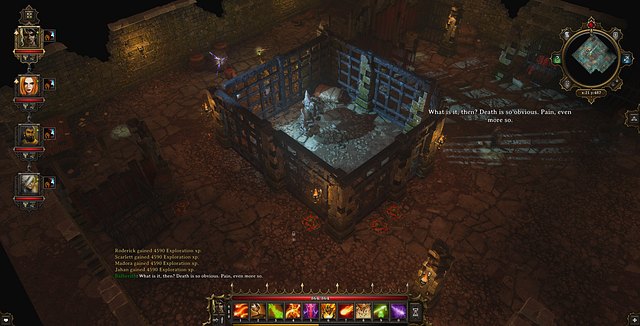 The ghost of the forest held captive.

In the Southern parts of the forest, you can meet an elemental, who was an apprentice of the ghost of the forest. From his words you will learn that a demon called Balberith holds the ghost captive. The demon can be found to the West, on the swamps.

During the conversation with him, you will learn about the connection between your companion mage and this demon. If you have Jahan in your party, you can exchange him for the rune, or simply defeat the demon. Sometimes, the demon may propose to kill another demon (Raazen Az'aroth), who resides in the North. It's a demon of fire affinity, and each element, besides fire, obviously, works on him. Additionally, you must first kill his underlings, because they explode upon death. The quest to kill the second demon will be given to you if you mostly didn't agree with Jahan during the conversation, or when your character is egoistical / heartless.

If you decided to fight the Balberith itself, this fight is a little bit different. The demon will summon 4 souls, which will make him almost invulnerable to everything. Your weapons and spells should be able to do something, but it's rather minor damage - besides, the demon will heal himself as long as the souls are there. The three of your party members should keep the demon occupied, and the fourth one should go and deal with the souls. They won't attack, but Balberith itself will summon Cyclops from time to time, and you should deal with them constantly (he will summon a total of 4 of them). After killing the fourth soul, the fight will gain momentum, as the demon itself will be more aggressive, but he will finally start losing his life a lot faster.

After killing the demon, collect the rune and release the ghost of the forest from the prison. Thanks to that, you will be able to enter the temple. 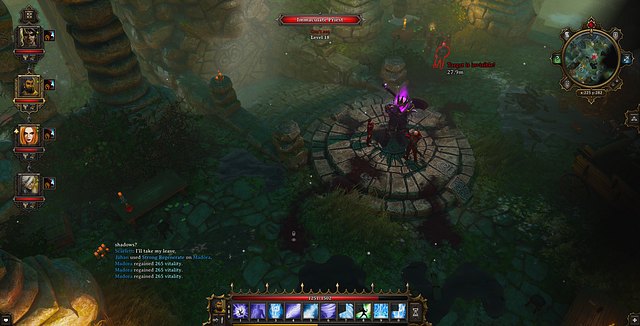 One of the three bosses protecting the entrance to the temple.

The entrance to the temple is located in the ruins between the forest and the swamps. There are demons, goblins and death knights there as well. Additionally, there are three bosses there - an orc, a goblin and a huge death knight.

The first one to encounter will be the orc Kallgruda Cloudpiercer, using a crossbow. The best tactic is to lure her into a side alley, where you can see a destroyed wagon, and kill most of them in one go by combining ooze and fire. The orc boss isn't really different from al the ranged-based enemies and most spells work on her.

The next one is the goblin Zuridraskaz, who is invulnerable to the elements - they simply heal him. Here, your warrior(s) will have to approve themselves. Send the warrior(s) to fight the boss, and use the mages to kill of the underlings. It's a good idea to begin the battle by dropping some AoE spells and move back a little. The enemies will come to you, huddled together in a group. Also, there's a mage in their group, who uses a teleportation spell - if you would have fought them from the distance, it's almost certain that one of your companions would be teleported inside of their group. It's recommended to kill the enemy mage as soon as possible, to prevent him from healing the boss.

The third boss is the huge death knight. He is invulnerable to water and ice, so he must be swarmed with spells from fire and earth. In some point of the fight, one of his underlings will make him invisible - use a summon to intercept the sneaking enemy. It's crucial to do so, as the boss hits extremely hard in melee range, so you should avoid him hitting your party members directly. The death knight is easily knocked down and stunned, so it's worth to keep him in one of those states. From the underlings, you should primarily focus the priest, who can resurrect the fallen ones.

After defeating the third boss, open the gate with the character who possesses the rune. The "Inside The Temple" quest will be unlocked, which is the continuation of the current one. After opening the door hidden behind the shelves, all you have to do now is to run straight ahead, to find the wizard. Afterwards, go back to the End of Time and Zixzax will lead you to the last portal, leading to the "First Garden".