The white witch will help you to find a way to repair her forge. You can do that after you've completed "The Hunt in Hunter's Edge" quest and collecting the protective amulet from the wizard's house. Additionally, you must find a book called "Titan Dictionary", and move to the beginning part of the location. Go to the right side of the map, and you should soon stumble upon a felled tree, which allows you to enter the forest. Select the character who has an invisibility spell / scroll, teleportation pyramid and "Phantom Protection Amulet" and use him / her to get inside. 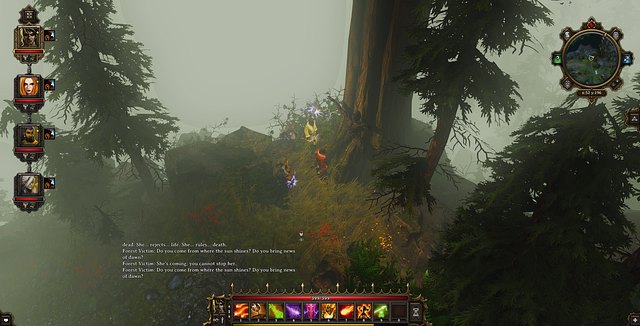 Even the trees are weird in this forest.

After going to the north, you should be able to see a pack of hostile ghosts. Call the rest of your party before engaging them and defeat the threat. Afterwards, go along the North-East road, where you will find Cassandra, Rex's sister, who will give you the scroll to repair the forge, if you kill Arhu. You can choose now - you can either kill her, or him. If you want to kill the wizard, go back to Cyseal and fight him in his office.

If you don't want to kill him, the case is a little bit more complicated, because the witch is immortal. You must find the head of a titan in the South, which will tell you (if you have the previously mentioned book about titans in your inventory), that you must burn her real body, which is hidden beneath the "Temple of Dead". Go back to the ruins in the forest, where you've met Sentinels (defense turrets) and destroy them, using the same spell that destroys the invulnerability of Death Knights. 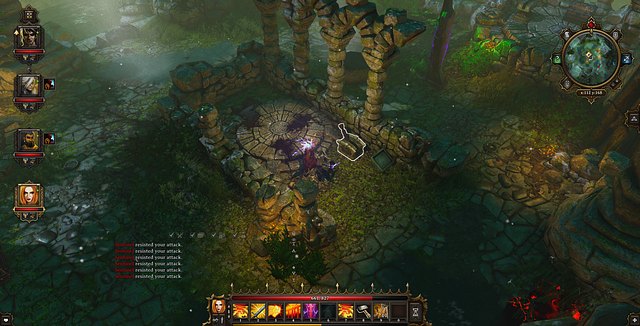 A platform on which you must die.

Afterwards, get in the middle of the room, where a lever is located - the character with a teleportation pyramid in inventory should stand in the middle of that platform. There, all of your other characters should kill that one, and flip the lever. The body should be moved to the catacombs. All you have to do now is to use the second pyramid to get to the first character to resurrect him / her. The whole party will be now underground.

Go straight to the crossing and turn to the right. You should see a raised bridge there. Near the bridge, there will be a skull, that you can use - afterwards, the bridge will descent, and you will be able to cross it. Do the same thing with the second bridge, and you will be attacked by a pack of demonic wolves. They won't pose any challenge to the group on the same level. After you've dealt with them, go further and turn to the right. In front of you there will be a desk, with a lot of different potion ingredients. Turn to the right, go through the smoke, and ignore the passage to the right - get to the wall and try to "enter the wall" on the left. You should be able to go through the wall (an illusion) and found yourself inside a room with Cassandra's grave. 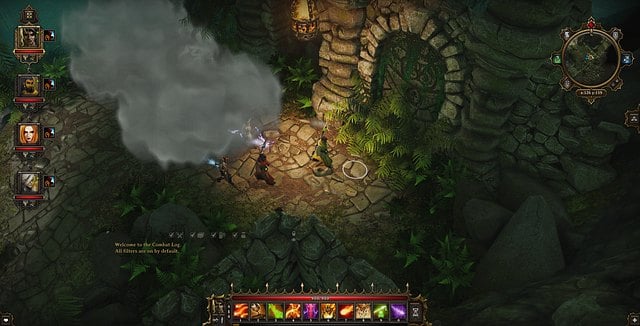 Dig her bones, get a key from it and use a fire spell on them, to burn them. Afterwards, get back to Cassandra and defeat her. Cassandra herself isn't a boss (each boss have a specific outline to their health bar), but she has an additional guard with her. It's a good idea to knock her down, destroy all the small fry and then attack her. The undead are immune to poison, so don't use it on them. Instead, use fire-based magic in them. After you've defeated all the enemies, get the scroll from the woman's corpse, and the quest will end.