Pier
Quest:
Headless Nick - quest from ghosts at the end of pier.

Passage into level 2  Continuation of quest Crabs versus Skeletons.

Lever and button  Opens entrance to second level in opposite corner of this room.

Crabs versus Skeletons - after entering the cave, you will gain a quest. On a plaza, after you've crossed the bridges, you will stumble upon a group of skeletons and orcs fighting each other. You don't have to engage them - you will earn experience either way. The mission ends when you defeat Pontius and his party on the second level.

Headless Nick - after speaking with the ghosts, you will gain a quest. Nick's head is located in Cyseal, on one of the tables on the festival. Before that, you need to complete a quest, which will cause the crowd to move to the second man, leaving the head unprotected. You can then choose if you want to leave the head there or to get it to the cave - both of them end the quest.

Another Crazed Mage - a single-threaded mission awarding you with experience points. After speaking with the ghost of a mage, don't move - teleport that character to the exit, to avoid the trap. 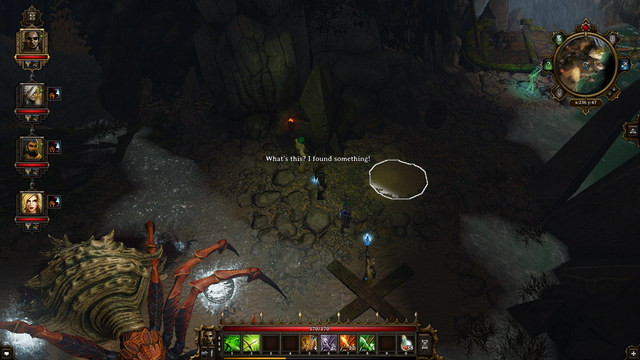 A spider and a small treasure nearby.

The spider and Sam's cellar - to collect the cellar for the Sam's cat from the tavern in Cyseal, you will have to defeat a gigantic spider. After eliminating it, this specific item will be dropped. The spider has a water affinity, that's why spells from that school of magic won't work on it and will heal it.

Desmonda - speak with the ghost of a woman. It's the person who Samson from the lighthouse in Cyseal is looking for. To complete the mission, you will have to get back to the lighthouse and speak with Desmonda. 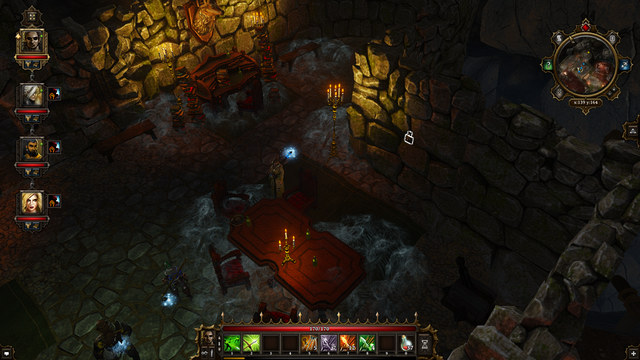 The location of the switch and the lever in the corner.

Entrance to level II - the entrance to the office is protected by a huge crab. To defeat him, teleport him away from you, or move away from him during combat - he's fairly slow and he probably won't be able to get close to you during one turn. Inside the office, look for a level in the corner of the room. After flipping it, a painting on a wall will move, revealing a switch. After you press it, a secret entrance to the second floor will appear.