Brandon who is staying at Silverglade, next to the tavern, asks you to deliver tenembriu, which is kept by the troll king.

To complete this quest, you need to be at, around, 14th level. Exit through the Northern gate and go North. Cross the bridge and you should get to the desert. There, you need to go Eastwards and find the entrance to Maradino's hideout (close to the Spider Queen). The entrance is overgrown with bushes, next to the tree, where there is the NPC Fredrick standing.

Inside, get a bit lower and where there are many fruits, you should find the place where to start digging. You will find the "Study Key" there.

Return to the beginning, now, and open the door to the study. There, leave the undead, for now, collect Mardino's books. One of them (Book) opens the passage to the neighboring hidden chamber. There, you will find a blood gem that you need to heal Frederick, for "Fredrick Blood Stone", and a book "Maradino Secret Files", which tells you to take it to the mushroom circle, close to the troll cave.

You can teleport to the city, or simply leave the cave. Still, after you try to do that in the conventional way, Maradino's ghost and his undead company appear. Maradino himself is quite powerful so, it is a good idea to remember to knock him down often. First, deal with his company, who he will summon once again, after you kill them. The upside is that you will be receiving additional experience for them, they are much weaker and the ghost performs no other move, but summon them. After you defeat them twice, attack Morodino himself. Freeze him, knock him down and set on fire. Then, he is not going to be that tough anymore. He is resistant to earth and air magic so, use the other elements. 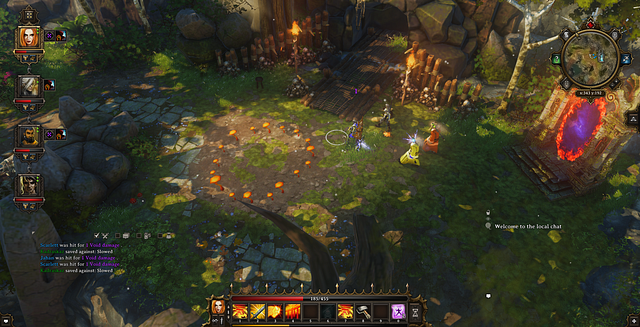 Now, you need to go West of the city and head towards the bottom of the map. If you encounter a troll, along your path, at the collapsed bridge, you will get the opportunity to convince him that he should show you the location of the king, on the map (there are two such trolls on the map; what is meant is the one farther away from the city). As soon as orcs start appearing, you will know that this is the right way. Once you notice the conversing orcs (a male and a female) you can choose between two ways to fight them. The more difficult is that you give the first turn to them after which, they summon six helpers, due to which the difficulty level will rise. The other, easier, way is to knock her down, to prevent her from summoning them. After you knock her down, kill her, before she gets back to her feet. Then, the battle will be fought between you and two orcs, instead of eight.

After you kill them, go over the bridge, to the right and use the book in the mushroom circle,. Then, enter the cave. There, you will encounter the troll king and his party but, you do not need to fight him, if you have someone skilled in invisibility, or with the skill to sneak. Then, as that character, cross the chamber with treasures and find the location, where tenembrium is to be mined for. Mine, around ten ingots and take them back to Brandon. Once you talk to him again, this quest will end and "The Naked truth" will start.