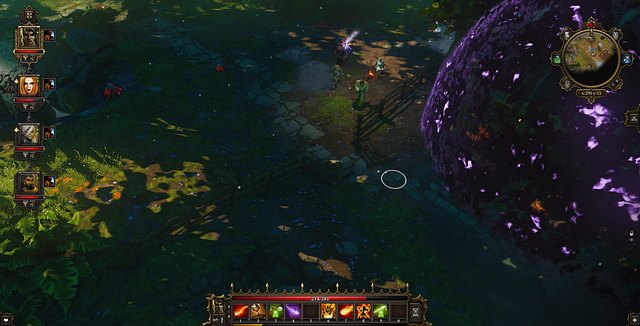 A barrier extended over the witch's cottage

You receive this quest right after you have defeated Evelyn and talked to zombie Jake. It is best now, to backtrack to the city, exit through one of the North-Eastern gates and follow the road. You will be then passing by the site of the fire, where you fight the burning legion. Follow the road until you reach the Luculla forest. To find the witch, you need to cross the bridge on the right after which, you should see a cultist telling you that his order captured the witch. You can try and convince him to let you through, but if you fail, you are up for a fight with his minions. They are resistant to shocking but, fire and acid works well against them, as well as the weapons of warriors. After you have defeated them, approach the barrier in front of you.

You now have two different methods to get rid of the barrier:

1. After defeating the ghosts, look around for one of the two talking mushroom, with which you will have to start a conversation to solve their puzzle (you have to do this once only). During the conversation choose the following dialogue options:

After answering in this manner, the mushroom will tell you how to dispel the barrier, giving you a spell scroll required to complete the task. 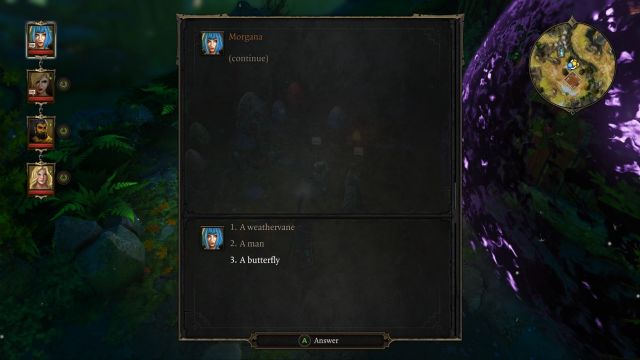 You have to select the appropriate answers to complete the puzzle.

2. To destroy the barrier, you can kill both talking mushrooms. It's not as simple as it sounds - this is without a doubt one of the most difficult encounters in the entire game! During it you will only be able to use physical attacks, and only with weapons that have no elemental affinity. Unfortunately, this does not work all the time - sometimes the mushroom will receive elemental damage, even when your weapon does not deal it. 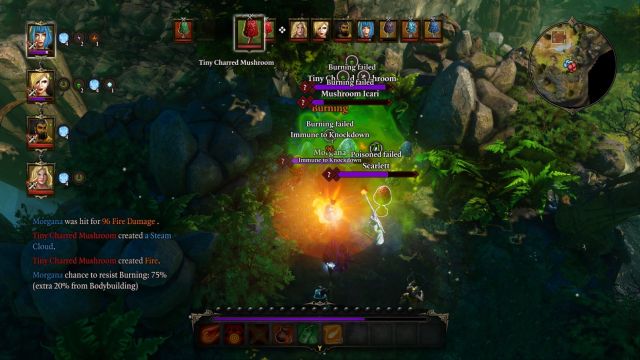 The encounter with the mushrooms is one of the worst in the entire game!

When a mushroom is damaged by any element, another one will pop up nearby, and it will happen each time you use an elemental attack on them. Additionally, each mushroom uses spells from different schools of magic (depending on the element of the mushroom itself), which, after a few attacks, will lead to a situation in which your whole party is stunned, on fire and poisoned.

Using area of effect spells won't be effective either, as mushrooms have high resistances to almost every element (and those associated with a given one are completely immune to it) and each one of those attacks will summon more enemies.

Fighting them is futile, because it's extremely annoying, and the mushrooms won't give you any decent reward, not experience for that, and the barrier can be dispelled through a short conversation. Which is why it's highly advised to choose the diplomatic approach.

Note - you won't be able to find the scroll (like in the "normal", non-enhanced edition version of the game) buried deep in the forest. The only methods to acquire the scrolls are to either kill the mushrooms, or to solve their puzzle. 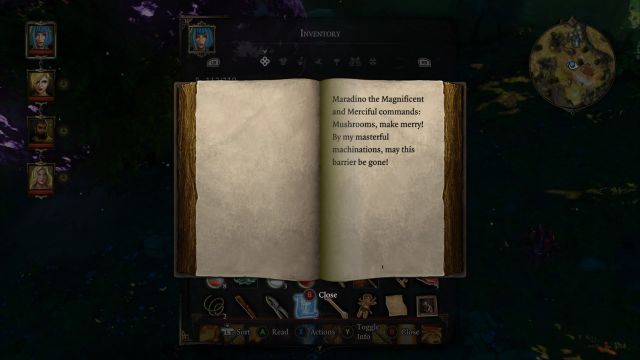 You must read the spell for the barrier to disappear

After you remove it, there appears the summoner again and this time you need to fight it. However, it is by no means tougher than the minions. After you defeat him, enter the cottage and teleport through the green mirror. As you are below, find the corner in dark and one of your characters should notice a button there. Press it to unlock the path.

Now, run along the tunnel, until you meet up with a band of cultists, who do not want to cooperate. Kill them, take the scroll with the spell, which they had on them. The friend of the white witch asks you to use it at the edge of the lake. Do as she says and enter the water to teleport to Hiberheim.

While there, keep going ahead, following the flaming statues. Once you see the stone spikes, there should be a button on the ground, nearby. Have one of your characters stand on it, have the rest run across and teleport him to you.

At the next spikes you will notice a lever that requires a key. It needs to be dug out from the nearby hole. Your character will let you know that he found something and, after you find the key, use the lever. Then, two robot birds will appear which are resistant to fire, and they themselves belch it. They are not too tough and, after several turns, you should be able to continue along your path. 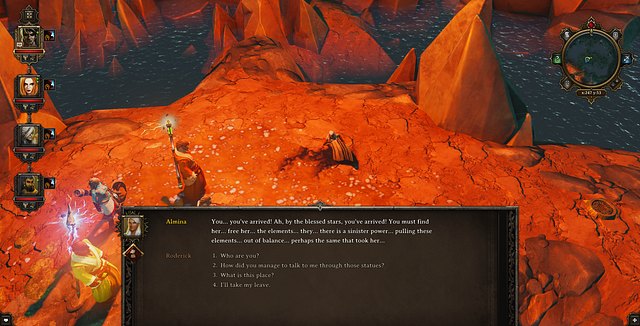 Finally, you will see Almina, who used to be the white witch's assistant. The woman dies but first, she asks you to free the witch herself. You now need to walk into the winter land of this location. Keep to the Southern part of the map and cross the trap that drops white icicles on you Nearby, there is another button on the ground. Use it in the same way that you did previously. One of the characters stands on it and the rest cross and teleport the one on the button to themselves. Nearby, you should find the spikes to the winter area. The button that opens the door is on the hill, on the right. Do the same as you did previously with the icicles but, instead of teleporting the character to the rest, pull the lever with another character past the spikes, for the passage not to shut again. 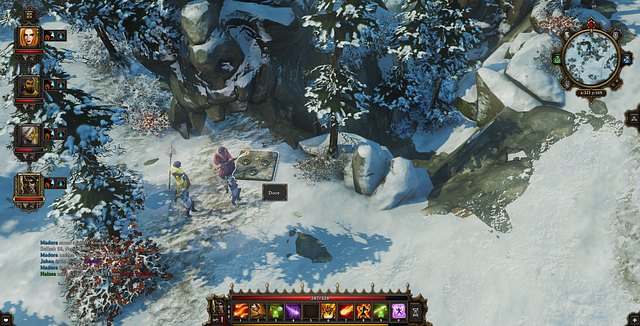 The hatch to the castle prison

Now, follow the road to the North and you will find the main entrance to the castle. Go to the West, near the castle's walls and find a hatch, which is a secret passage into the castle.

Once you take the manhole, you will only have a short tunnel to go through, which is filled with traps. However, you only need a good fireball to blow them all up, at one take. After that, you only need to use the tornado to remove fire and acid.

You emerge at the prison level and it is here that you need to look for the white witch. You can exit the holding cell by digging up some dirt, or by destroying the door. Climb up the stairs but, do not enter the first chamber. You need someone with the skill of sneaking, or someone who knows the invisibility spell. This character needs to enter and activate the portal on the left. If someone, who can be seen, entered that room, lava would pour over them.

After you have activated the portal, have everyone use it. The name of the portal is Hiberheim Prison. Then, keep following the corridor, until you reach the big ice crystal, which the witch is trapped in.

Now, you only need a tool to break the ice with. What you need is the Frost King Staff, which you can find past the main entrance to the castle. At the entrance, you will have to face two waves of ice elementals. The best strategy here is to use fire. After you defeat them, you will have to cross the barrier that cannot be destroyed in a conventional way. You need to go North, where fire is shot against ice. There, you need to locate the entrance to a large forge, where the entrance is being guarded by a big group of cultists. What proves helpful for killing them is an AoE spell. After you defeat them, enter and run along the corridor to the forge itself, where a sorceress is creating a blood gem. You fail to catch her, but she will leave four demons for you to play with. They are not too strong, but they are tough. After you defeat one of them, it should drop a scroll named "Orders". In the actuality, this is the spell that removes the barrier.

Return now to the castle entrance and use the spell to bring down the barrier. Enter and you will find the frost king there, who will attack you, right after a short conversation. It is a good idea to teleport him to the edge of the arena, where there are no grates, because he will be using them in a later phase of the fight.

You need to remember that Boreas is resistant to fire, ice, air, knocking down or shocking. All three types of the elements heal him additionally, so, you should not use them. Still, what affects him are physical attacks and damage from poison, although it is impossible to poison him. Some time into the battle, he summons an ice elemental and two smaller minions. You need to deal with them in the first place, because they deal even more damage than the king himself. After a while, he summons fire elementals. Additionally, the grates mentioned above start pouring lava and, if you are not standing on a patch of snow, you will be set on fire over and over again. You can use rain to alleviate the effect, partially. Just like previously, you need to deal with the summoned beasts, in the first place, and then attack the kin, because he himself, is not too willing to attack. 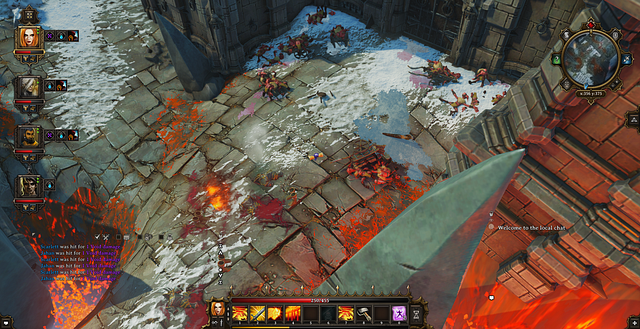 The entrance to the forge, where you need to destroy the staff

After the battle, pick up his Elemental Staff, after which you learn that, if you destroy it in the forge, you free the mages that help you free the witch. So, go for the forge, where you have obtained the scroll to the barrier, and throw the staff into the large furnace.

After you destroy the staff, there will appear elementals that used to be trapped in the staff. The fire one gives you a rune, which can summon him, while near the witch's prison Teleport to her prison and use the stone.

The elemental unfreezes the witch and the quest will be complete. After you free the witch, she will be taken to your plane by ZixZax, where you need to visit her.