Riddle with chests by chapel

Entraces into tunnels connected to riddle - details below.

Type of a secret: Buried chest
Comment: In the corner, on the stairs near the villa buried chest is located.

Type of a secret: Buried chest
Comment: To get outside to the chest you need to have a high perception level, to notice in left wing of chapel the hatch, which is leading outside.

Type of a secret: Skillbook
Comment: You'll find the book on the desk inside hut. Key to the hut is in the chapel.

Riddle with chests by chapel

Type of a secret: Riddle
Comment: In this place you'll find a key. Using it you'll be able to open chests with other keys in order seen on map, until you'll reach last chest. Details below.

Chest 1/4  First chest of four to find, where all four allows to open "Last Chest" chest in The End of Time.

1  Type of an item: Chest
Comment: Chest of baron Diederick. It lays on left side of throne and you'll open it using key which you'll find near by.

2  Type of an item: Chest
Comment: Chest of baron Diederick. It lays on left side of throne and you'll open it using key which you'll find near by.

3  Type of an item: Chest
Comment: West chest - the key is located in opposite side in the flames.

4  Type of an item: Chest
Comment: East chest - the key is located neat the west chest.

5  Type of an item: Rubin
Comment: In the cellar of the lighthouse you'll find a ruby on a shelf.

6  Type of an item: Diamond
Comment: Under the tree lays a skeleton, which has a diamond with him.

7  Type of an item: Chest
Comment: To open it need a key, which you'll find near the statue of wind.

8  Type of an item: Ruby
Comment: The stone is behind the painting on the floor. You'll get into building through the tunnel in the middle of cemetery.

9  Type of a secret: Burning chest
Comment: Firstly you have to put down the fire using rain spell. Then the chest will be escaping from you on the west. Chase it until it stops, and then take items from inside.

Entraces into tunnels connected to riddle - details below.

1  Type of a secret: Riddle
Comment: In this place is located entrance to second tunnel (look at details below).

2  Type of a secret: Riddle
Comment: In this place is located entrance to first tunnel (look at details below). 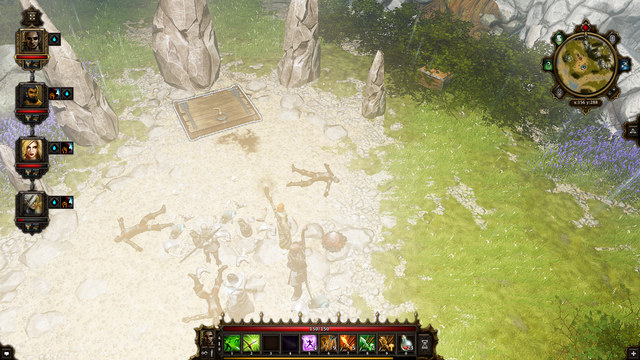 Entrance to the first cave

The elements riddle (marked with green color on the map) is not difficult, but if you are not careful, you will have to walk a lot. After finding the entrance to the first cave, guarded by undead, you will see four columns with switches and a board, on which the order of the switches for the second cave is described. Analogically, in the second cave, you will find the order for the first one. 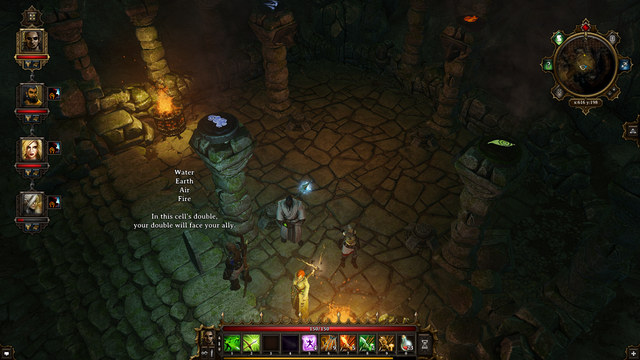 The columns in the first cave

The order of the switches in the first cave is as follows: earth, water, air, fire. 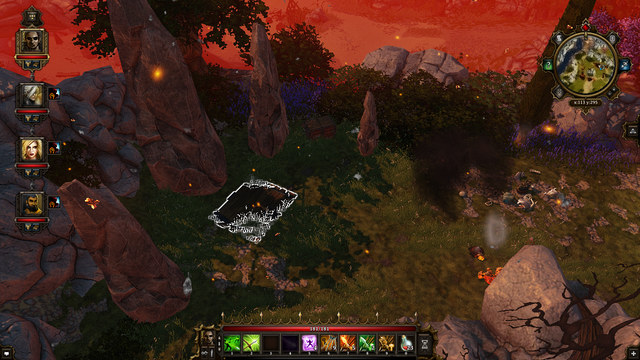 The entrance to the second cave

In the second cave, with its entrance guarded by fire elementals and a mage, you have to use the following order: water, earth, air, fire. 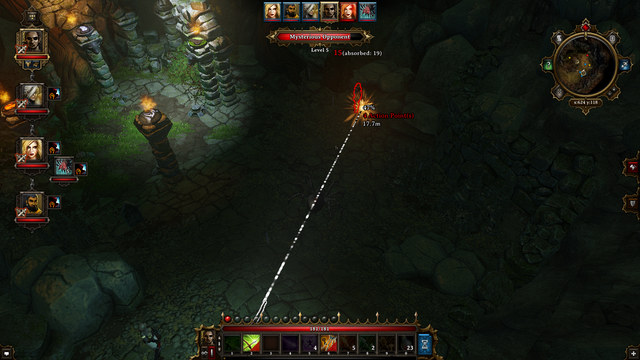 Your enemy in the cave

Leave the cave. Enemies will await in both caves now. After defeating them, each one will drop a medallion. Also, a passage to the lower level will open. 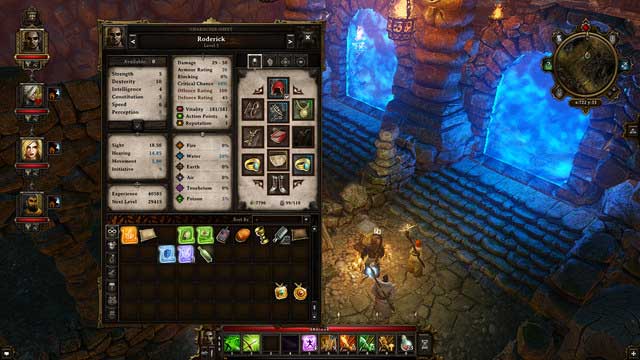 Barriers in the dungeon

In the lower level, you will see two passages blocked by a blue barrier. To deactivate it, you have to place the medallions on the pedestals on both sides. Then, you will be able to go inside and collect the treasures that await you there.

The riddle outside the chapel 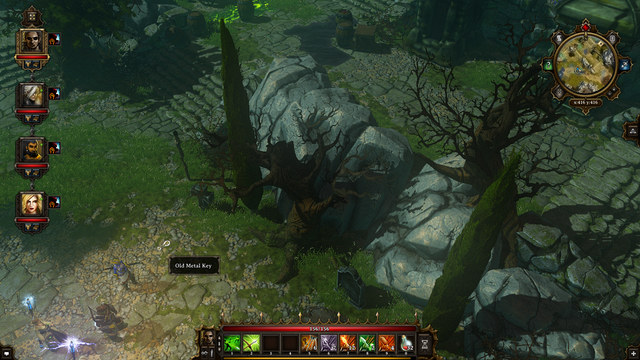 This riddle is not difficult, but it requires you to walk a lot. First, dig out the key (1) from the first grave near the stairs. It will allow you to open the first chest (2). 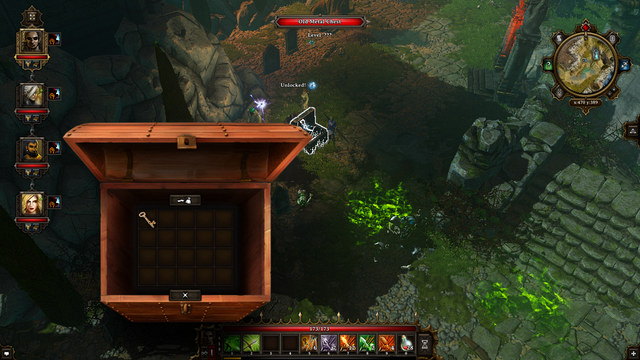 The chest with the key

Later, you will find more keys that fit only one lock. The order of chests with keys that fit the next one is marked on your map. The treasure is hidden in the very last chest. 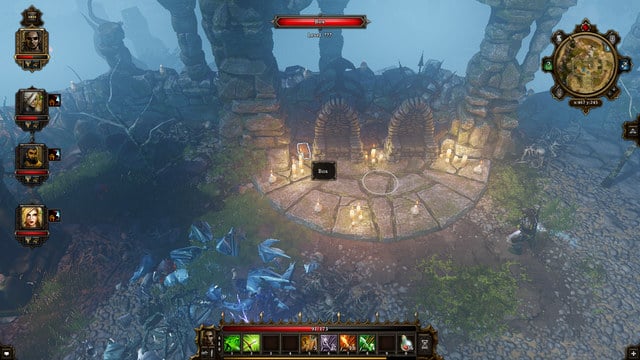 The chest near the throne

After defeating baron Diederick in castle ruins, you can open a chest with a reward, using a key that you will find by highlighting the items nearby. The chest is located to the left of the throne. It is slightly smaller than usual, but contains valuable items.

The chest behind the earth monument 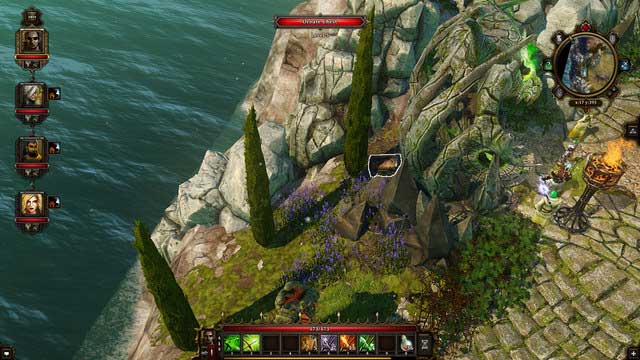 The chest behind the monument

Near the talking monuments, behind the earth monument, there is a chest that is difficult to notice. You will find the key to it near the water monument, inside a torch. Use items highlighting to find it. 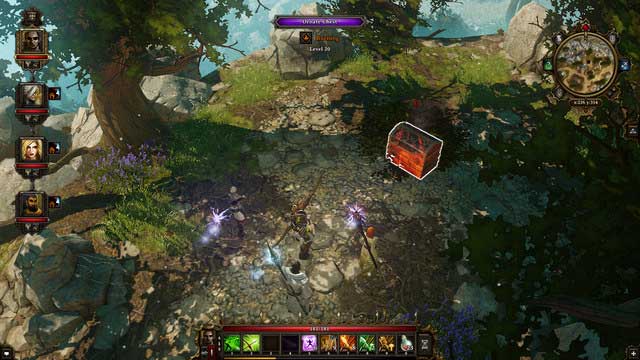 A chest on fire

The burning chest is located in the middle of the map, on a hill, and contains valuable items. To open it, instead of a key, you will need a spell that will extinguish the fire. You can for example freeze it or summon rain. 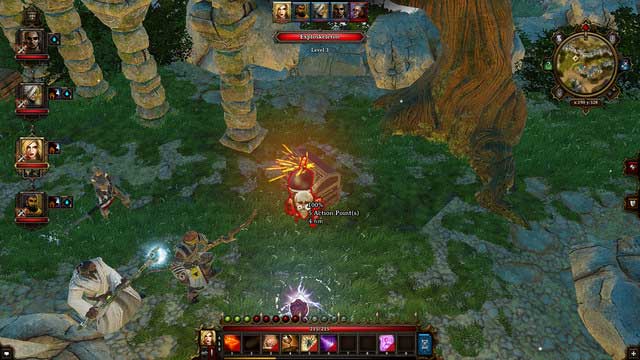 Now be careful, because an exoskeleton will jump out of the chest and attack you. It is good to teleport him far away from the team.

Secret chest near the chapel 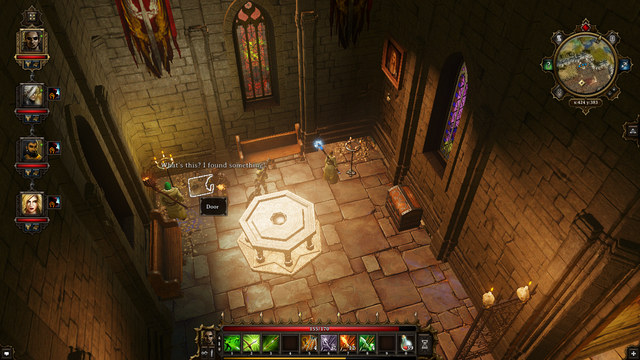 Finding the treasure number (7) may be difficult for some. You need to have a lot of perception (preferably +8), get inside the chapel and head to the left wing. There, in the left corner, you should find a passage outside. 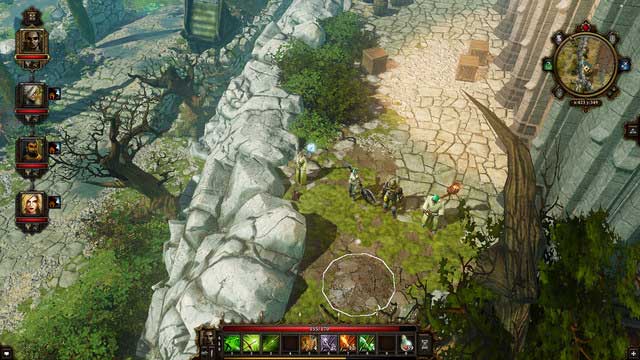 A pile of dirt near the tree

Now you just have to get close to the tree and dig in the pile of dirt.