On the beach to the West of the city, where there are orcs and their corpses, you found a strange cave which you decide to explore. Its entrance is guarded by a gigantic orc, who is firing magic bolts. 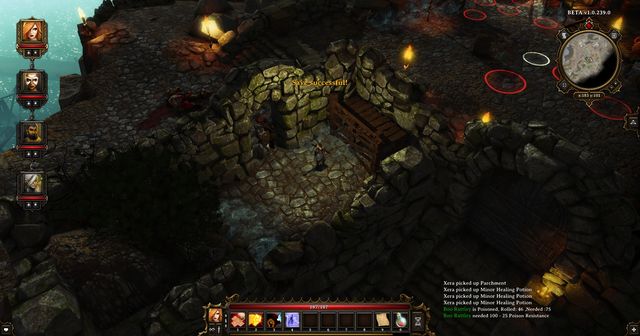 The conflict of interests Orcs vs. Zombie

The first obstacle inside is the electric field that you can disable by putting a barrel on the circular device in the middle of the field.

Ahead, you will encounter an orc that is bleeding to death and, even further, you run into a battle between the undead and orcs. I recommend that you wait for them to finish each other off and finish out the survivors. You will receive experience for each killed creature anyways.

After you win the battle, climb down, through the billows of smoke and reach the boss at the end of the path. In this fight, you need to remember about a few things. First of all, the boss is resistant to freezing and quite mobile. Remember that your companions cannot stand too close to each other, because his strongest attack is a stream of water that deals damage to everybody in front of him. It is best to surround him and then attack. What works well against him is setting on fire and there is no point in attacking the crabs, because they are too weak to deal any damage.

After you defeat him, enter the room behind him. Find the painting over the table, destroy it or expose it. Then, pull the lever next to it. You will find a hidden button, press it and, in the other corner of the room, next to the grate, there will appear a hatch. Climb down to the lower level. 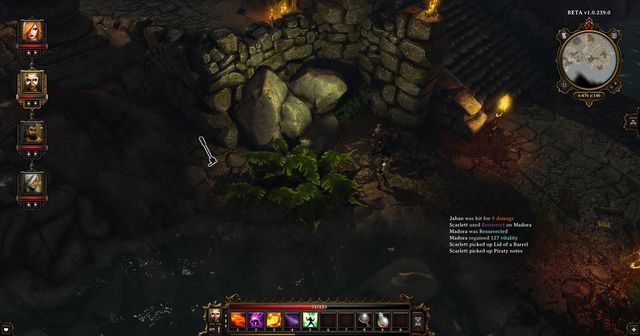 At the lower level, there are some mines and crabs that you need to kill. Still, any of the routes will take you to the chamber in the middle, with multiple levers. You need to find the right lever because the incorrect ones trigger various events that deal damage (e.g. a fireball).

Thanks to this lever, you will unlock passage ahead, thanks to which you will finally reach the end-boss - the skeleton captain. Of course, it does not attack without its guards but, it is best to kill it in the first place, because it revives the ones that you kill.

It is also a good idea to smash the oil barrel in the middle and set it on fire, at a distance. Thanks to this, the fight will be shorter. You need to remember that, just like the other undead, these are resistant to cid.

You need to remember to collect the blood crystal from the chest on the ship. By using it, you will unlock the next room in "The End of Time".