Cecil asks you to find a powerful relic for him, which has been stolen from him. He suggests that you start searching at Conrad's who is collecting wares at the docks. 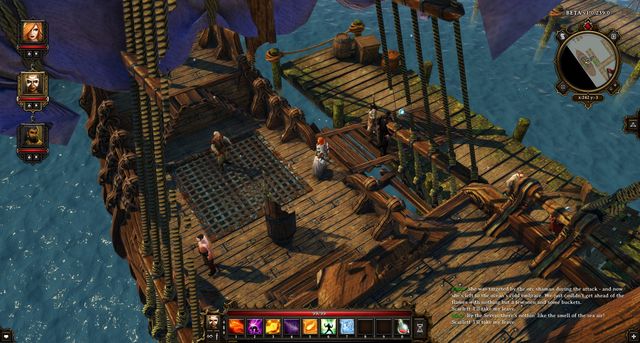 Conrad is aboard the ship

Conrad is standing on a large, surviving vessel, with one of the sailors. He will tell you that he knows nothing, but someone in his crew might know something more and that that is where you should ask.

Marv the sailor, tells you that, during the attack, Captain Dietmar escaped with a packet under his arm. Once you tell Conrad about that, he will tell you that he must be on one of the beaches. You need to search them through.

Dietmar is on the beach past the tunnel, where you complete "The Fabulous Five" quest, to the North of the city. In front of the tunnel, there are ten opponents and inside, a giant robot. You can learn about the way to defeat them in the abovementioned chapter.

After going through the cave, head to the teleport on the west and then to the beach. You will find Dietmar with his sailors.

He will attack you as soon as you get near. He can use the invisibility spell, but in the time that you can't see him, you can deal with his companions. After killing him, collect the artifact and take it to Cecil.

You can then decide whether you want to give him the artifact back or not. If you do not do that, the item will remain in your inventory.