This quest is given by the ghost of Samson (the "The Scaredy Pact" quest), who tells you about his love for a woman. You resolve that you find her. You need to return to the city and leave through the South-Western exit, near the harbor. You will find orc and human corpses there and you need to find footprints leading to a big orc with his guards. The battle with this opponent has been described in "Crabs versus Skeletons" quest. Then, enter the cave.

Inside, you will witness a fight between orcs and skeletons. Join the fights or wait for them to finish each other off. Then find the key owned by the pirate leader (the lower level) in the "Crabs versus Skeletons" quest. Locate the stairs, which is a meter away from the battlefield and climb downstairs. After you notice the remains of dragons, you will know that you are going in the right direction. 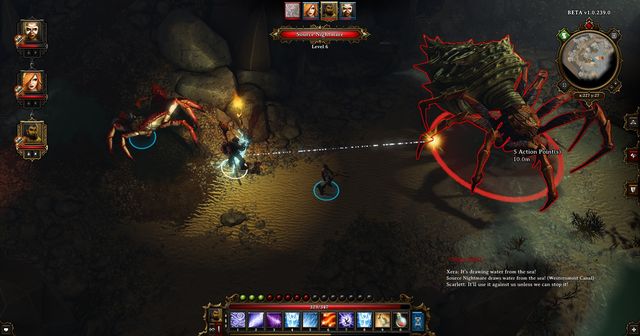 There is a difference, isn't there?

You will reach a place where a giant crab will attack you. During the fight, mages should keep their distance and warriors should not stand close to each other. The crab has a strong AoE water attack. Moreover, he can summon lesser crabs. You can send one of your companions to deal with them, as they are not particularly strong. This boss is vulnerable to fire, lightning and acid attacks.

After you defeat it, proceed ahead and talk to the ghost of the woman that you meet there. You will point her to Samson, after which you return to the lighthouse. You can now decide if they leave together or separately.