Along your path to the city, at the beginning of the game, you will notice a corpse with a journal on it. From the journal, you will learn that a secret statue granted him the ability to fly, which turned out not to be true. You decide to solve this mystery but first, you need to reach the city.

While in the city, go North and find the entrance to the cave. The entrance is guarded by ten enemies. It is best to attack in the way that you kill one boar, which bursts in acid, and treat the two nearby ones with fire. They should be quick to die and, thanks to the explosions, the area covered by the cloud of acid and fire should expand. Now, you simply need to retreat with your part and wait for the rest to start chasing after you through that area. They should not be able to reach the end and, even if they do, finishing them off should not be problematic. 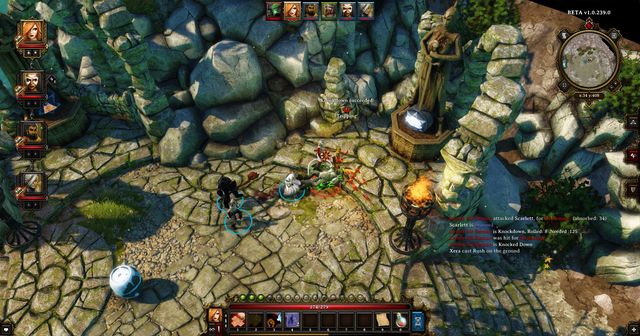 Inside, you encounter a robot that is a part of "The Fabulous Five" quest side quest. From this chapter, you will also learn how to fight it.

After you defeat the robot, go towards the other exit and keep going West. Eventually, you should reach the four talking statues.

To complete this quest, you need to use the spells of water, fire, air and earth. Each time you use such a spell, there should appear a demon of a given type. In themselves, they are not too tough but you need to remember that spells of their types will heal them. Additionally, the elementals leave damaging areas, which are characteristic to them, after dying: fire elemental leaves a burning area, earth - acid, water - water and air - a storm.

After you kill them, the entrance to the cave will be revealed, where you meet the imprisoned wizard.