At the beginning of the game, this is your only quest in the journal. You need to solve the case of a mysterious murder, but you first need to access the city attacked by the orcs. 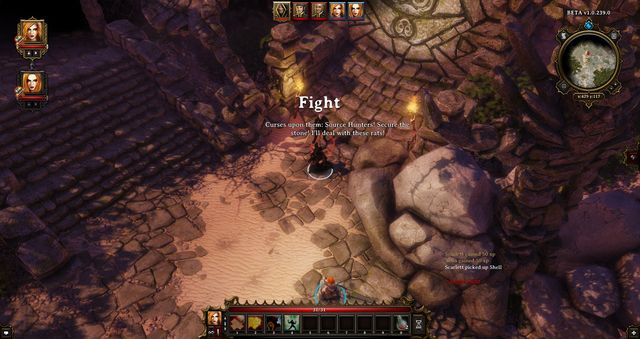 In the underground, on the right, there is an optional tutorial

Continue along your path and, after several moments, you will watch a cutscene in which necromancers escape the crypt. After they notice you, they summon the undead and take it to the heels. The opponents are not too strong and you will be able to deal with them quickly.

You can now proceed ahead or turn to the tomb. Inside, there is a tutorial, which presents to you the basics of the game and, additionally, you will be able to gain some gold. After you take the tutorial, you will end up several meters away from the exit so, you will not get lost.

If you take the other path, turn left after a while and you will reach a guarded bridge. While talking to the drunken guards, you will be able to kill them , or let them escort you to the city. If you choose to fight, you will receive additional items from their corpses. In the opposite case you will receive their help in the incoming fight with orcs. 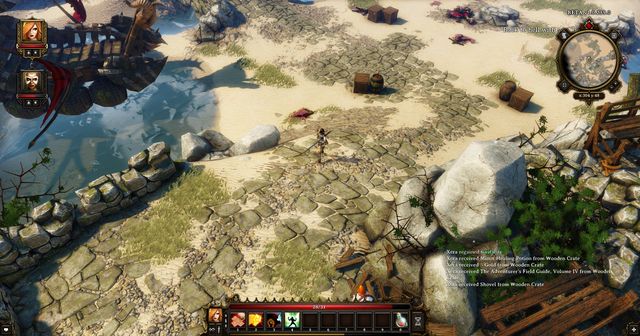 Here starts the fight on the beach, in front of the city gates

Either way, cross the bridge and go ahead. After a while, you will watch a cutscene of the orcs landing at the beach. Help the soldiers that fight them. It is worthwhile to take out the shaman in the first place, because he can heal the rest.

Watch out for the barrel of oil, which is standing in the middle of the battlefield. If you treat it with fire, it will explode over a large area. Remember that the orc shaman can also blow up the barrel.

After the battle, approach the city gates and you will meet Ahru there - the man on the murder case. He will ask you to meet him and the watch captain, in the North-Eastern part of the city.

After you get there, climb up the stairs and talk to the cat, which is Ahru. Then, he will tell you what happened on the night of the murder and suggest to you, that you talk to the undertaker and see the corpse. 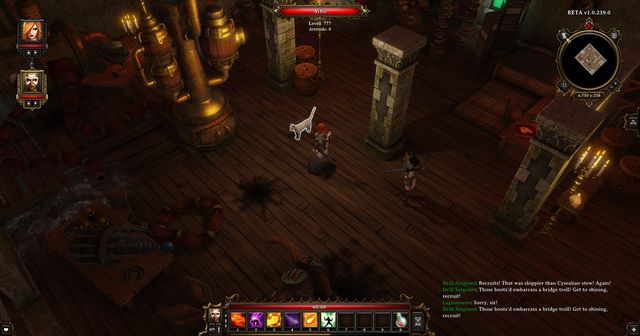 Ahru is a cat

Also, it is a good idea to check out on the captain, who is occupying the lower floor, to be allowed to the murder scene and receive several side missions.

First, it is a good idea to visit the local tavern, where the murder took place. The room is on the ground floor and the guard will open the door for you, as soon as you tell him that you have the permission. Once the door is opened, you will be attacked by a magical discharge, which will not harm you, though. 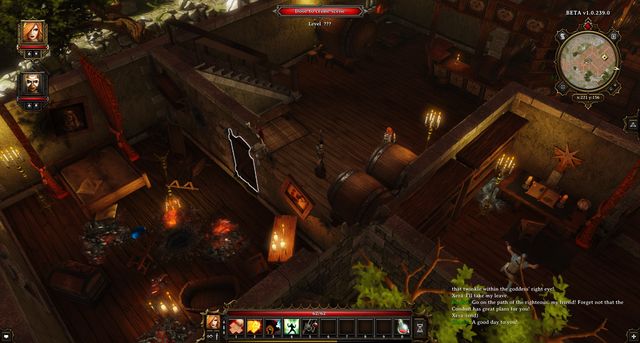 It is in this room that murder was perpetrated

You need to open the chest and, if you do not have any lockpicks on you, you can always smash it, which will take a bit longer. Apart from that, above the floor, you will find a stone for "The Story of The Stones" quest. If you still do not have it, you will be teleported to another location and the quest will start. After you read the letter from the chest, you will receive a new quest: "The Councillor's Wife" quest, which is worth completing, after you have seen the corpse.

Go to the undertaker now, who is staying to the North-East and, in the room on the left you will find notes, from which you will learn that the corpse has been stolen. The undertaker himself suspects four people: Mayor Cecil, Captain Aureus, Evelyn the healer and Esmeralda, the wife.

You now need to complete the "The Councillor's Wife" quest.

After you have completed that quest, go to the Evelyn's place but Thelyron, whom you meet there, will tell you that she's has been out in a hurry. She will tell you where Evelyn's house is, which you should go to now. Before that, however, you should take Evelyn's bag from the other room, at the window, and find the key inside.

After you get inside, open the chest on the right to find there a spell that reveals the entrance to her hidden lab. A bit ahead, on the shelf, there is her journal, from which you learn that that place is to the North. 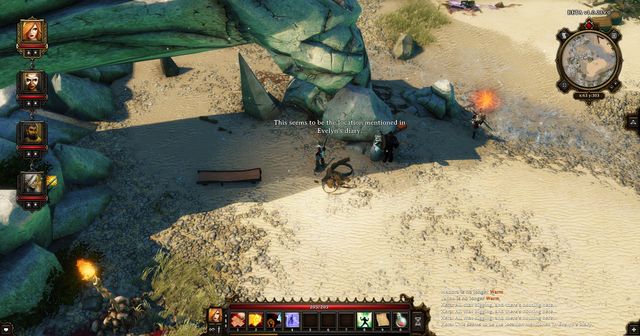 Here, the party members realize that they are where they should be

The lab itself is on the Northern beach. It is important that you have the spell on you. Leave the city through the Eastern exit and go Northwards. Soon, you should run into a big group of the undead (about ten of them). After you defeat them, enter the cave that they have been guarding, where you find the boss that you need for "The Fabulous Five" quest side quest. After you have defeated him, leave through the other exit and go to the Eastern beach. There, keep exploring the Southern rocks, until the party members tell you that you are there. Use the spell and you will have cleared the way for yourself.

Inside, you will encounter a cultist, who will take it to the heels, after he sees you, in order to alarm the others, Kill him, if possible, before he reaches them and collect the key from the corpse. If he manages to reach the orcs, they will attack you. If you kill him and you play your cards well,, the orcs will leave, thinking that you are on their side but, you can meet them in the future, then. You can also slay them.

Inside, there are lots of cultists but, they will be low on health so, each blow that you land will be lethal for them. Still, it is best not to make it unnecessarily long, because it can really get on your nerves. 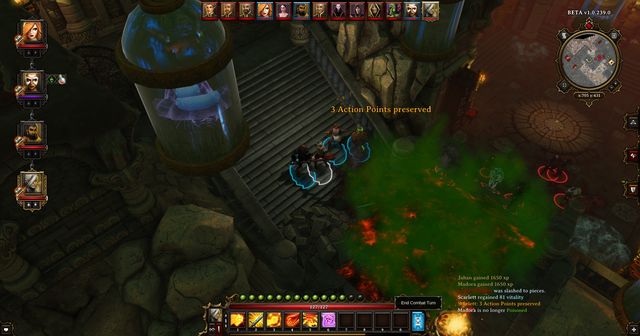 First the acid, then fire - nothing shall pass

After killing them, go down, where the real battle starts. You will meet Evelyn, who will summon two burning rams, a demon, a sorcerer and a burning legion's leader. It is good to place an elemental between them at the start. Fire elemental will do best. By doing this, you will get most of the enemies to focus on him and not on your team. The rams should be your priority, as they explode when they die. Attack them with everything besides fire and acid, because these spells actually heal them. Remember also about keeping your distance. If you make them explode during first few rounds, they will deal serious damage to their companions and additionally heal your elemental. Next is Evelyn, who casts three spells in a row. After the rams explode, she should be at approximately 50% of her HP.

After the battle, talk to Zombie Jake, and he will tell you who killed him. This mission will draw to an end.