The weapons category determines the effectiveness of a character with a specific type of weapon, and it includes Bows, Crossbows, Single-Handed weapons, Dual Wielding, Wands and Two-Handed weapons. It is good to define what weapon will the character use at the start, to master using it. Crossbows are available only from about level 10, so make sure that you know what type of ranged weapon you want to use in the future.

The last ability is using weapons made of Tanebrium. This ability is not available from the start, but only after completing a quest for Brandon is Silverglen, in which you have to bring him Tanebrium ore (you can find it in Luculla Mines). After doing this, every character in the team unlocks the ability and gets +1 point. You cannot buy tanebrium weapons if you do not have this ability.

Defence abilities increase you protection against attacks. It is very important for melee classes and not so important for ranged classes (like enchanters). The abilities are: Armour Specialist (increases defence by 5% every level and reduces the movement penalty from heavy armour by 20%), Shield Specialist (increases shield defence by 5% every level), Bodybuilding and Willpower (both protect the player from debuffs; Bodybuilding protects from physical status effects and Willpower from mental status effects).

The largest category, from which everyone should choose no more than 2 abilities and develop them to level 5. Five of them increase the number of available spells/skills with each level (Attention - at the fifth level, you can learn all of the spells/skills from a given category, so don't throw away older spells as long as you have space for them) and reduce the AP penalty for using spells/skills from higher level. The abilities are: Aerotheurge, Geomancer, Hydrophist, Pyrokinetic, Witchcraft, which are connected to following elements: air, earth, water, fire and the last one is mainly necromancy (summoning dead creatures to fight for the hero).

The remaining three categories are important for characters that use weapons: Expert Marksman, Man-At-Arms and Scoundrel, which are the skills of a ranged fighter, melee fighter and a rogue, who specializes in ambushes and backstabs, preferably using a dagger.

A thing worth noting is the fact, that having 5 points in a given skill won't allow you to memorize all the abilities from that skill - 5th level allows you to learn 6 abilities of the Novice level, 4 of Adept and 2 of Master. You will have to decide which abilities you will use and which will be forgotten.

We can distinguish three abilities here. It is enough when one of our team members (preferably the leader or one of the main characters, because of the dialogue options that they have) has these abilities. The are: Bartering (the ability to buy for less and sell for more), Leadership (all of the team members obtain the Leader in Sight! status when close to the leader, which gives them +10% damage and +2 initiative) and Lucky Charm, which increases your luck in the battle (critical hits, dodges) and helps you find better treasures.

Main characters also have the ability called Charisma, which defines the first impression that they make and sets the number of points during a conversation.

We can find four abilities here and it is enough if only one character is good at them. They are: Blacksmithing (the ability to repair weapons; it is useful for making sure that your weapon won't break during a fight and reduces the cost of repair; requires a hammer) Crafting (the ability to create items; increases the number of items that can be created and their quality) Loremaster (allows you to identify items; requires a magnifying glass; items are usually more valuable when identified and at first you can do this at a vendor, but later you will have to do it yourself) and Telekinesis (important particularly to the character who collects the loot - it speeds up the process and allows the player to reach remote items; if you don't have a strong person in your team, it is good to develop this ability to move objects on the battlefield, like barrels with oil).

The three abilities here are: Lockpicking (not every lock can be opened without a special key and those that can be, usually can also be destroyed, but it damages the weapon and makes a lot of noise, which makes it impossible to stay unnoticed), Pickpocketing (higher level allows you to steal from richer people, like for example merchants and also to steal heavier and more valuable items) and Sneaking (useful when you want to spread your forces over the battlefield, steal from guarded places or perform ambushes). 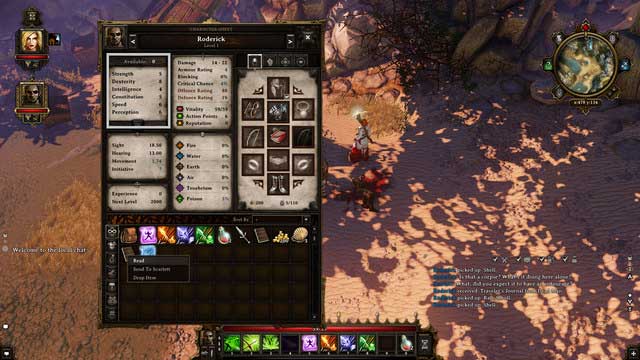 Attributes are kind of a character's parameters. Represented by Strength, Dexterity, Intelligence, Constitution, Speed and Perception. You obtain points to distribute with every new level and it is important to choose you attributes according to your class and style of playing. Most of them are required to use specific equipment and increase your base damage, defence, hp, movement speed and initiative. With a proper equipment, you can increase your attributes for the time that you're wearing it. Some potions also do that.

Strength is the basic attribute for melee fighters. It enhances the Man-At-Arms ability by increasing the value of attack points modifier and your chances of hitting. Additionally, it allows you to carry heavy equipment and powerful weapons or armors. It also describes the total weight of equipment that a character can carry and allows one to move or throw objects.

Dexterity has a positive influence on the Expert Marksman and Scoundrel abilities. This attribute is particularly important for protection classes, as it increases the defence, and for ranged fighters, using bows and crossbows, because it increases their chances to hit.

Intelligence is an attribute mainly for magic classes, as it enhances the quality of Elemental and Witchcraft spells. It also allows one to wear specific mage equipment.

Constitution should be developed in every character, besides their main attributes. It describes the maximum hp and also, what's very important, the maximum amount of Action Points during combat.

Speed, just like constitution, should be developed in characters that attack a lot. It sets the value of initiative at the beginning of the battle, is responsible for movement speed and the number of Action Points at the start. It is good when the number of the Speed attribute is similar to the number of Constitution and if these numbers are rather high.

Perception should be developed to a high level in at least one team member. Besides increasing the starting AP amount, it also increases the chances of critical hit and hitting from distance, as well as initiative. Thanks to this attribute (you should be at about 8+ level of it), you will be able to uncover traps, which are very dangerous in Divinity, and also find treasures, switches and secret passages. 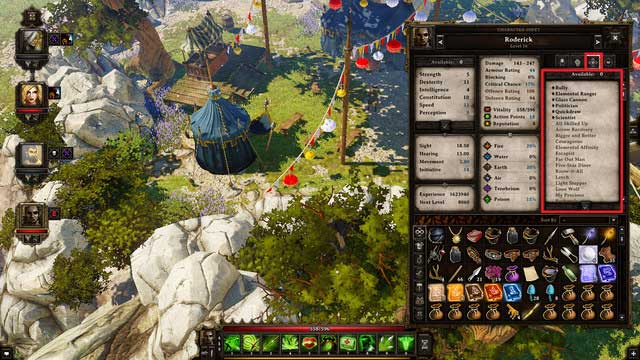 Talents are obtained once every few levels. They are valuable, because they become passive abilities that change our heroes permanently. Besides some talents that are available for all the characters, most of them (particularly those more powerful) depend on the number of points in a given specialization. For example Arrow Recovery allows an archer to recover 20% of his magic arrows and Elemental Affinity reduces the cost of AP of a spell of the type on which a mage is standing. You should pay attention to what talents you choose, because some of them might actually do harm, if you plan a specific strategy.