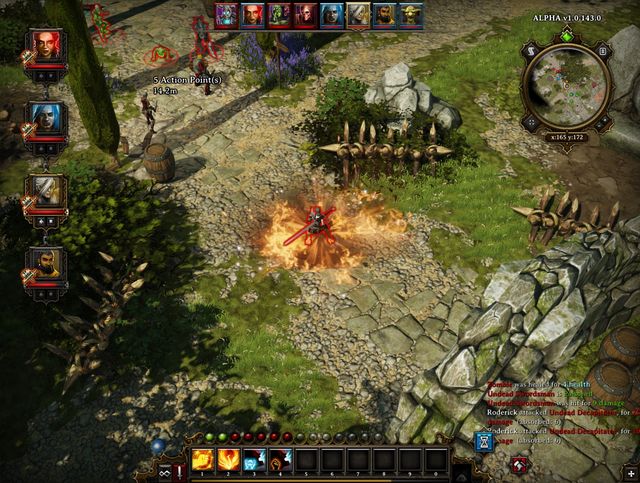 Combat in Divinity is turn-based

Combat in Divinity: Original Sin is played in the turn-based mode. In the course of the combat, each of the participating characters has its turn and it adheres to its place in the queue.

Each attack of a character requires action points, which replenish after a turn begins. It should be noted here that the unused action points are transferred to the next turn, up to a certain limit. Sometimes, it happens that you have five AP, where your ability requires seven. You can then move, or attack, so that you have, at least, two AP left. Then, in the next round, due to accumulation, you will be able to launch the attack that requires seven AP.

The fight is also joined by all the NPCs within sight. If you are close to a city, and you are not sure if you will be capable of defeating an enemy, you can try to lure them closer to the city gates, so that the guards help you.

An important factor is your chance to score the hit. This appears whenever you aim at the enemy with an ability or an attack. You need to be careful though because, even if you have 100% chances of scoring a blow, and there is an obstacle in the line of fire, you will not hit the opponent. This mainly concerns ranged attacks. 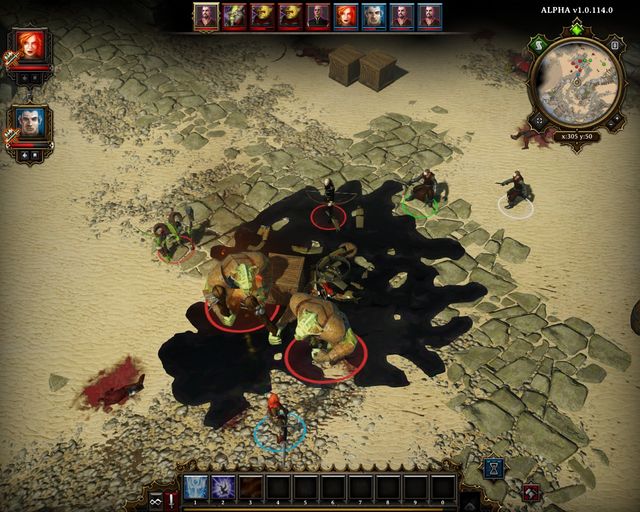 After you spill oil under somebody's feet, it is a good idea to set the slick on fire

If your chances at successful attack are low, it is worth to consider changing position that your character is currently in.

Many characters have quite an array of AoE attacks, i.e. the ones that, if launched, affect a certain area. You need to remember, though, that such attacks will also harm your characters, if misused, which may determine the outcome of the battle.

If you want to move to an area, all you need to do is click that area. Some of the enemies are capable of attacking if you pass near them. At that point, there appears a circle around them, which informs you, at which moment of your move the attack will be launched. It is ten worth reconsidering your decision to move there.

If any of your characters dies, you can resurrect them with rejuvenation. Characters remember things and if there is anyone to keep being hit by your spells, they will go angry and attack you. It is important that you make sure that you do not attack, inadvertently, your character.

The developers have implemented an interesting system of combining elements, thanks to which interesting effects can be created, which will aid you in combat. This happens thanks to the fact that using an element against a target, usually leaves the opponent in a certain state, like e.g. wet or blazing. Thanks to that, they are more vulnerable to the other elements.