On this page of the Disco Elysium guide, you will find a list of all the Skills and their detailed descriptions.

Skills in Disco Elysium are not active skills like in many other RPGs, but passive talents that determine how well your character will perform at certain tasks: opening a locked container, attempting to fire a gun, delivering a punch, lying.

Skill system - how does it work? 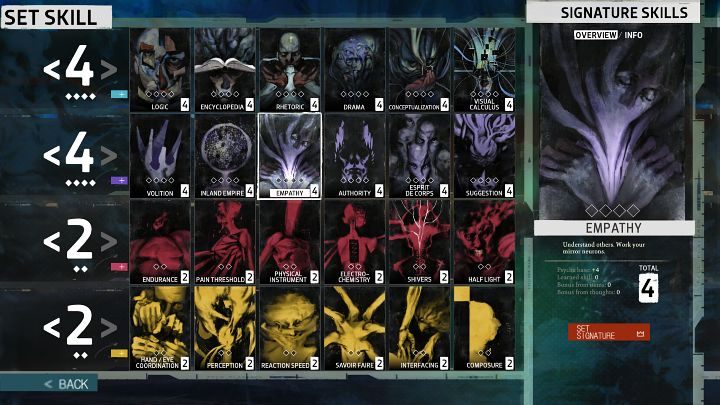 The initial skill level of your hero is equal to the level of each attribute, as you can see in the image above. The exception here is the Signature skill, which receives a bonus of +1. The level of an attribute also determines how high you can develop the skills associated with it.

Items and stimulants can increase the main character's skill level. Some provide only positive statuses, while others add and subtract points of particular abilities. It's a good idea to swap them before you take a skill test to increase your chance of succeeding.

Best skills - which ones?

It's hard to say which Skills in Disco Elysium are the best, because everyone can customize their character of Harrier to fit their own play style. Before you start the game, decide which character you want to play: a brilliant detective, a clever thief, a great speaker who uses his tongue as a weapon, or maybe a skilled strongman.

However, there are some skills that during the course of completingDisco Elysium are tested more often than others:

There are also two skills to be highlighted that directly affect the Harrier du Bois' Health and Morale: