On this page of the Disco Elysium guide, you will find a list of all attributes with a detailed description of each attribute and how they affect gameplay and your character's development.

In Disco Elysium, as in many other RPGs, character development is based on attribute points that define the character's archetype. Attributes in Disco Elysium are also associated with certain Skills, such as Intellect with the Logic skill and Motorics with the Perception skill. It is important to note that during Skill checks, the game only checks the corresponding skill and not the attribute that is associated with it.

All Skills available in Disco Elysium are described in detail on the Skills page. 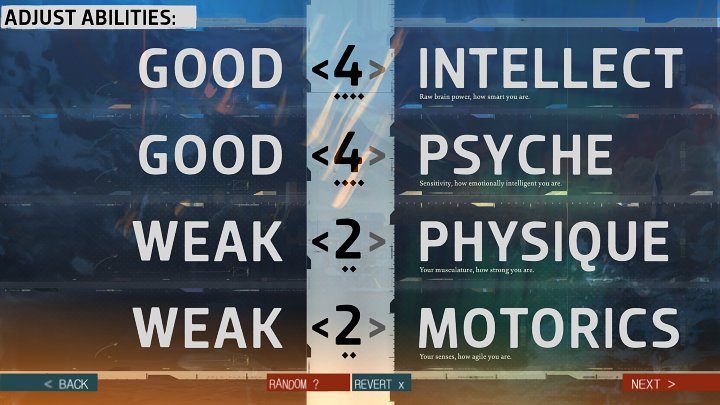 Intellect is one of the attributes found in the game Disco Elysium. It describes Harrier's reasoning ability. There are 6 skills assigned to Intellect, which work best when the Player wants to learn as much as possible about the world of Disco Elysium.

Skills associated with the Intellect attribute:

Psyche is one of the attributes found in Disco Elysium and can be described as a combination of wisdom and charisma. There are 6 skills assigned to Psyche, which work best when the Player wants to use language as a weapon and influence the characters they encounter on their journey.

Skills associated with the Psyche attribute:

Physical build (Physique) is one of the attributes found in the game Disco Elysium that determines Harrier's strength. There are 6 skills assigned to Physique, which are tested when the hero tries to use his strength to influence elements of the world around him and e.g. open a container with a Prybar. Also linked to the physique attribute is the Endurance skill, which determines the character's Health level.

Skills associated with the Physique attribute:

Motorics is one of the attributes found in Disco Elysium and determines a character's agility. There are 6 skills assigned to Motorics, which are tested when the character attempts to perform an action that is not based on their strength or intelligence, such as using a gun to shoot a belt or jumping off the roof of a building.

Skills associated with the Motorics attribute:

Best attributes - which ones?

It's hard to say definitively which Attributes available in Disco Elysium are the best, because with these Attributes everyone can customize Harrier to their own play style. Before you start the game, decide which character you want to play: a brilliant detective, a clever thief, a great speaker who uses his tongue as a weapon, or maybe a skilled strongman. The game Disco Elysium can be played in many ways and no matter which path you take, some skill tests you will end up failing.