In this section of the DiRT Rally 2.0 guide, we have included information about car control using different controllers, as well as info about help and assists available in the game. You will also learn the basics of the rally driving and how it differs from races. We advise how to pass rally stages quickly and without accidents.

Driving a rally car on a loose, gravel surface differs significantly from asphalt races. While in the latter you absolutely do not want to drift sideways in the corners, in rallies light drifts and counter-steering are essential to quickly complete tracks. You cannot learn the track by heart, you will not remember all of the brake points and you will not have wide curbs to use on the sides.

Rally driving is more like crossing through a narrow tunnel with great speed, with traps on both sides of the track. It requires maximum focus all the time, not only on what you see in front of your car, but also on what might appear in a moment. Your only aid are the co-drivers' commands and your driving skills. 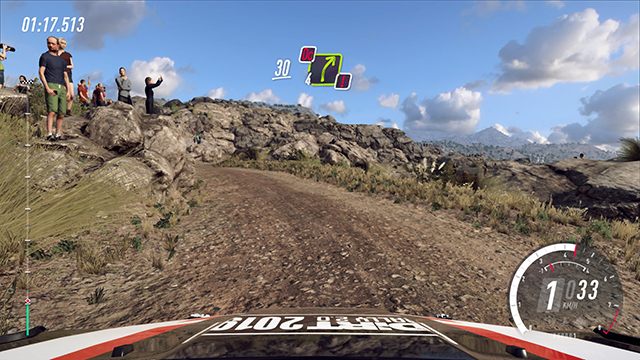 The left turn disappears behind a terrain obstacle and the co-driver is already communicating a turn to the right - rally driving requires you to think ahead.

DiRT Rally 2.0 aspires to the simulation genre, which is why controlling the car is not the easiest task and you need to take more complex physics into consideration, as opposed to games such as DiRT 4 or The Crew 2. You will get the best effects by using the steering wheel with pedals. You will have a little less control on a gamepad, although DiRT Rally 2.0 is quite playable on the pad without major modifications to the control settings. An extreme option is to use a keyboard. However, even though you can set your own keys, the control over the vehicle will be extremely difficult and competing in online matches and getting the best times almost impossible. If you still want to use it, you should also use the in-game assists. 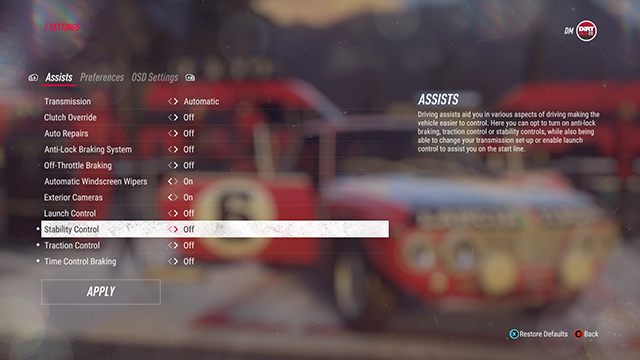 While using the steering wheel, you should turn off most of the assists immediately. Assists such as the automatic transmission, ABS, Traction or Stability Control slightly slow down the vehicle, preventing you from having the full control over it - which, in turn, the steering wheel with pedals provide. It is worth learning to play without assists from the very beginning to prevent yourself from getting bad habits. If you are unsuccessful, try with a little help of ABS and Traction Control.

While playing with the gamepad, you should also start with the least amount of assists, as you will still have proper control over the vehicle by using the analog axes. You should, however, keep in mind that changing gears will be a little bit more problematic with the gamepad, especially due to the fact that you will be doing it constantly. You can try the semi-automatic mode, in which you have access to the automatic transmission, but you can still change gears manually, allowing you, for instance, to quickly decrease gears. If steering without assists is too difficult for you, turn on the slightest values of ABS, Traction Control and Stability Control. It is worth noting that in DiRT Rally 2.0, unlike other titles, playing with a gamepad does not require any additional corrections in the controller settings. 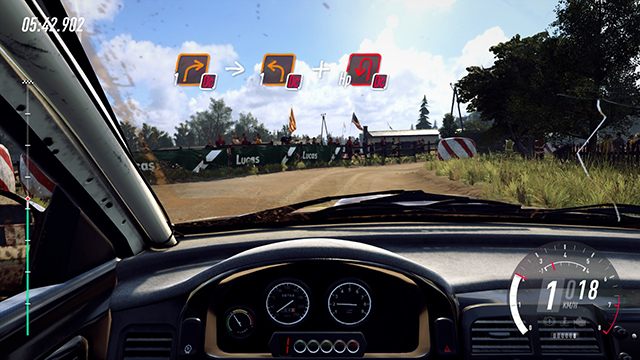 Steering using the keyboard has nothing to do with realism or simulation, which is why you should have no qualms to use the assists. This is because the keyboard offers only "binary" control - you either have gas pressed to the metal or zero power. The same applies to brakes and turning - the tires are either directed straight ahead or fully to the left or right. One way to get rid of this effect is to quickly press the gas or brake keys, allowing you to have bigger control over the vehicle, but this requires a lot of practice. You can do the opposite - start with the full ABS, Traction Control and Stability Control assists and then gradually lower them until you feel that you have no control over the car.

In all cases, regardless of the controller, you should never have the "Off-Throttle Braking" option turned on - it simulates uniaxial pedals and unnaturally combines gas with the brake.

In the current, post-release version of the game, the Force Feedback on the steering wheel does not work correctly and the developers are working on an appropriate patch.

It takes a lot of driving skills to quickly complete a track, which is why at the beginning you should not be thinking about completing races on the first place, but rather focusing on preventing your car from getting damaged. Driving on gravel or mud requires a completely different style than races taking place on asphalt. You will achieve much better results by balancing with the entire mass of the vehicle, instead of just turning the wheels, but that requires proper gas and brake handling. Additionally, a lot depends on the type of drive of the car - a car with a rear-wheel drive behaves differently than one with front-wheel or 4x4 drive. Learning the proper usage of the handbrake is also beneficial, as it will be used in some of the more advanced tricks, such as the Scandinavian flick.

While driving on gravel, be prepared for very smooth operation of gas and brake pedals, and, above all else, the full use of their ranges. Very rarely you will have the opportunity to push either of those to the metal. Usually you will be operating in the middle of their range, which is why driving on a keyboard is so difficult. In the rally races, the "feathering the throttle" technique - focusing on smooth addition and reduction of gas - allows you to maintain better grip. You will also use the brake in the same manner. 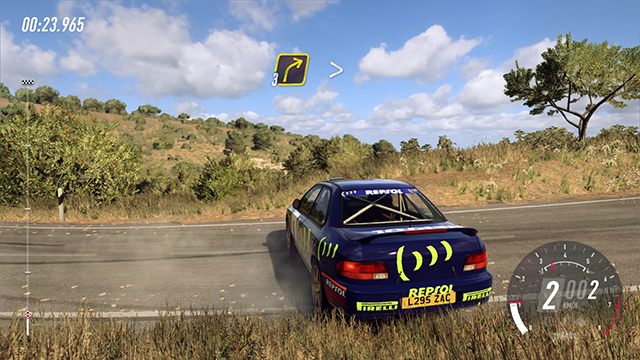 You will be watching the route from this position frequently.

Be prepared for constant counters with the steering wheel. Often the wheels will be directed in the opposite direction than the turn. In real-wheel drive cars you can use the gas pedal to turn the car properly towards a better exit from a corner. This, combined with proper maneuvering of the steering wheel will allow you to perform the Scandinavian Flick - a maneuver in which you first set the car opposite to the direction of the turn and then quickly return towards the direction, in a position allowing a much faster exit from a tight turn.

You start it on the inner side before the turn and then turn rapidly in the opposite direction. Immediately after that, you release the gas, press the brake and turn back into the direction of the turn. You now release both the gas and the brake at the same time. The back of the car should turn in such a way as to allow you to get out of the turn quickly, increasing speed at the same time. The maneuver is very difficult and it requires practice to master. Remember that you can use it on loose or slippery surfaces and only on turnarounds, 90-degree turns and some of the "1-s" in the game. 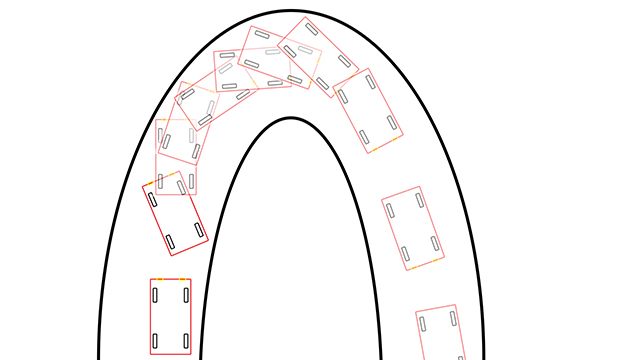 You should, however, change the above habits when on asphalt routes. There, as in the races, the greatest grip is what matters the most - the less slips and counters, the faster and gentler it is for the tires. 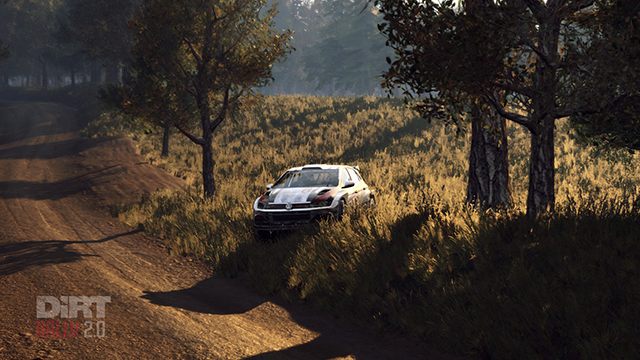