This page of the DCS: AH-64D Apache simulator guide describes in detail the instruments and button panels in the cockpit of the pilot and CPG. We also explain the role of all buttons on the cyclic stick and the collective lever. 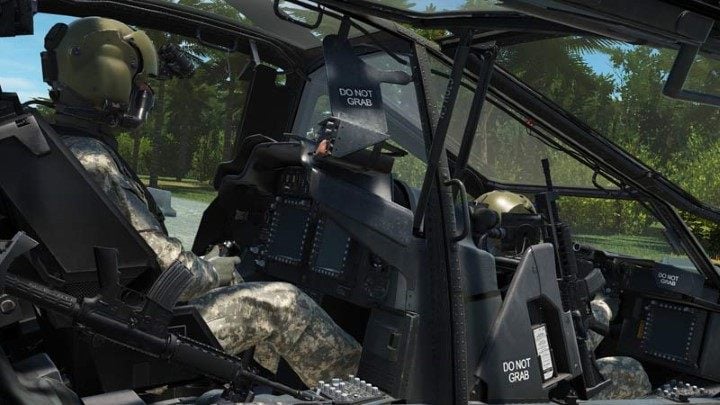 The AH-64D Apache attack helicopter has a two-seater tandem cabin. The pilot (PLT) is sitting in the back, co-pilot/gunner (CPG) is in the front. Their cockpits duplicate most of the on-board instruments. Both of them can also perform almost all the duties of the other crew member, although this is usually the case in emergency situations. In practice, the CPG only pilot the machine when the pilot is incapable of doing so, e.g. due to sustained wounds. The pilot operates the 30mm gun and Hydra unguided missiles, and the CPG operates the Hellfire guided missiles and the TADS target identification and targeting system, as well as the FCR radar. 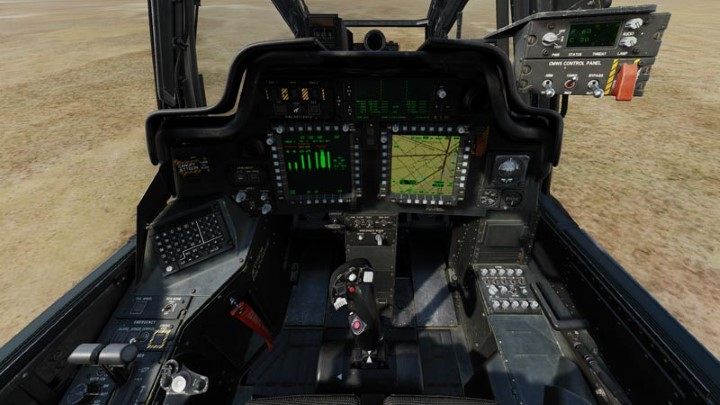 The pilot's cockpit is the main place where the helicopter's flight systems are operated. Here you can perform a Cold Start, access more engine switches, an exterior lighting panel and a flare system. 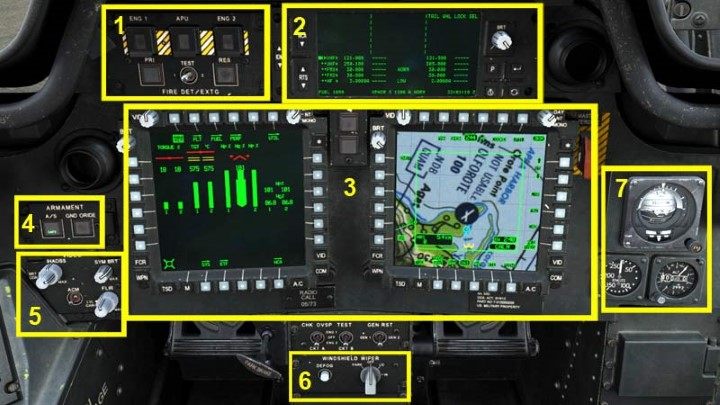 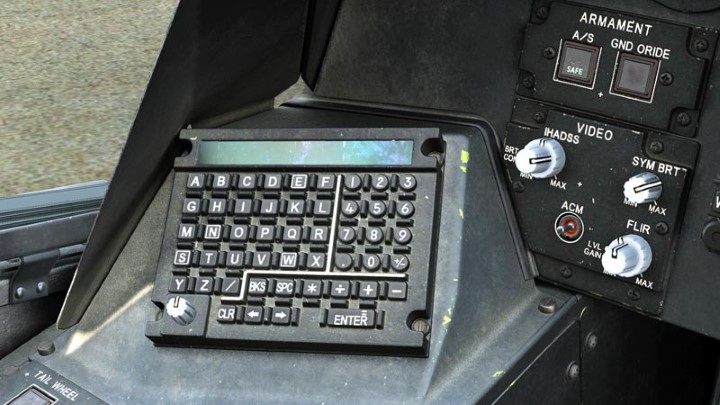 On the left side of the instrument panel, you have a keyboard for entering data for many systems - the effects will usually be seen on MPD screens or the EUFD display.

The two MPD multifunction monitors are identical and operated in the same way: 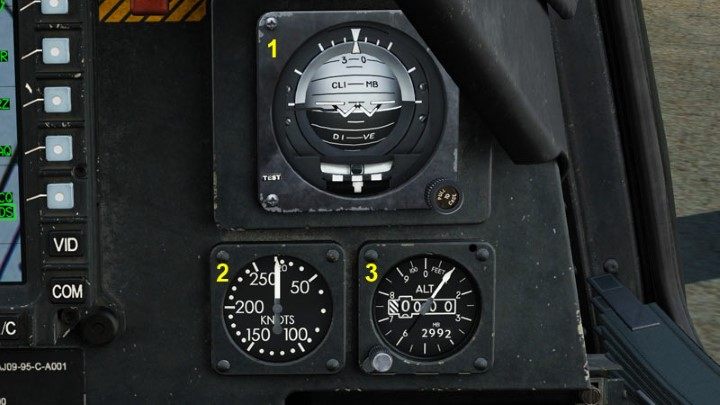 If the HDU helmet display fails, you will be able to use traditional analog on-board instruments: 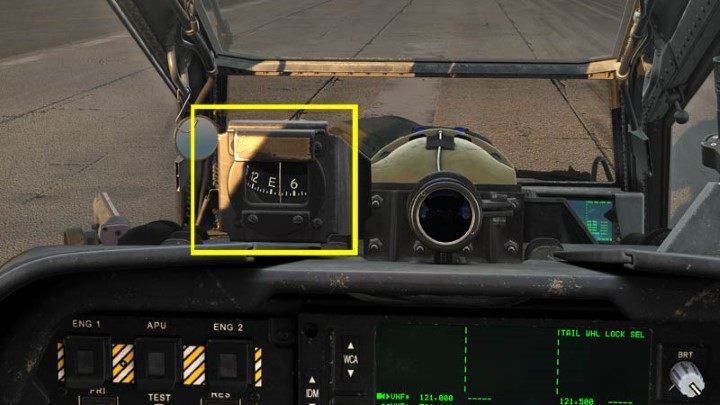 There is also a spare compass at the top. The round visor next to it is for calibrating the helmet sight. 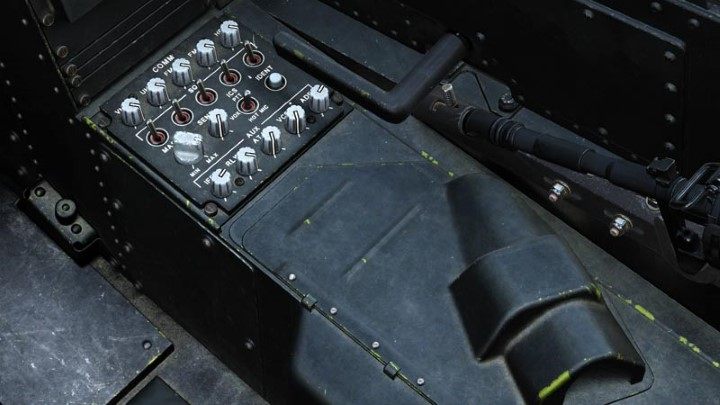 On the right side, there is a panel for radio communication and a compartment for the monocle eyepiece with an HDU helmet display. 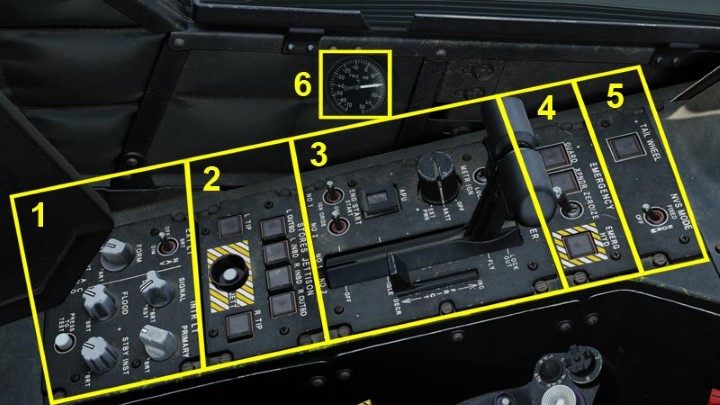 The default key for switching to the CPG gunner's cockpit is "2" on keyboard. Press key "1" to return to the pilot's seat. 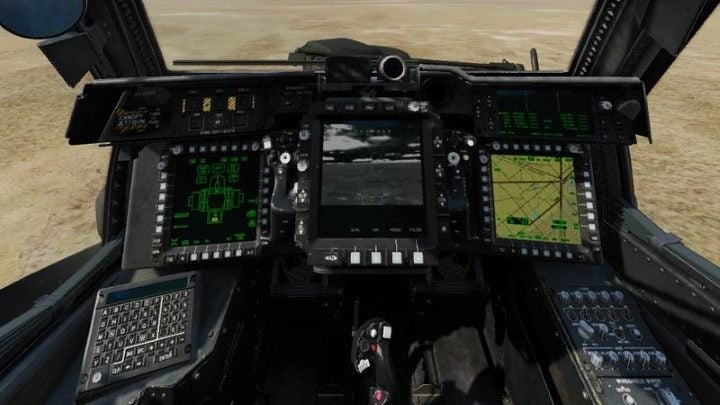 The CPG gunner's cockpit is distinguished by a third screen in the center, which is intended solely for the TADS (Target Aquisition and Designation Sight) system. It is operated by a dedicated set of buttons on both sides called "Hand Grips" (Left Hand Grip and Right Hand Grip). Everything else is almost identical to the pilot's seat, with a few exceptions in the engine and lighting sections. 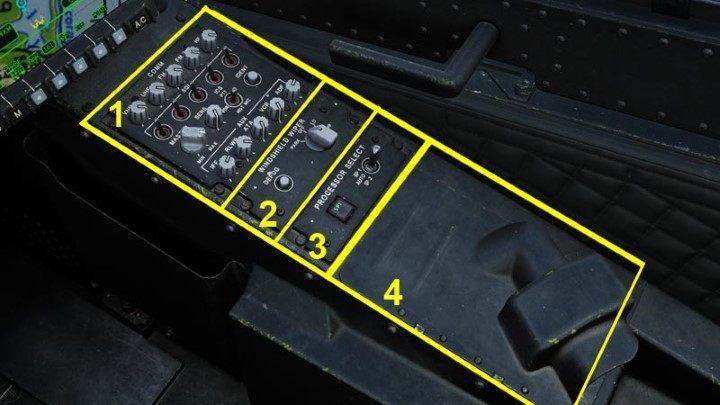 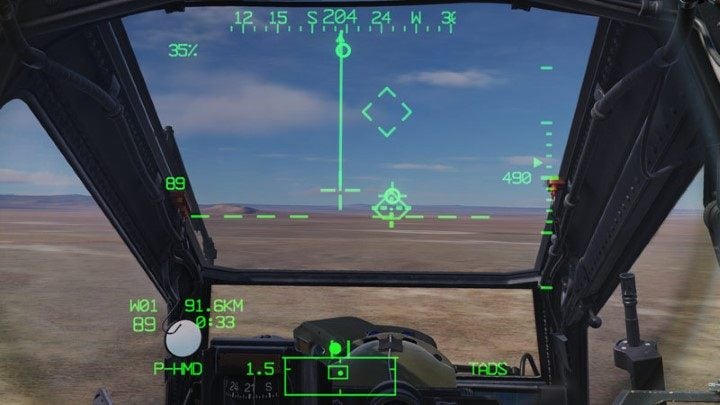 The AH-64D Apache does not have a traditional HUD display like in modern fixed wings aircraft. Instead, crew members have an optional eyepiece - a monocle that displays IHADSS (Integrated Helmet And Display Sighting System) information. 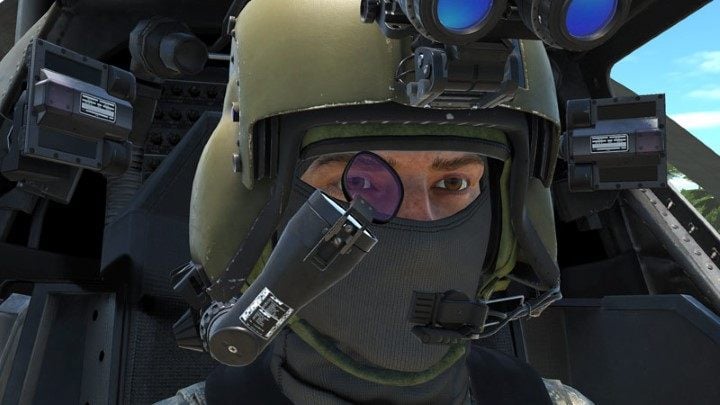 The Helmet Display Unit is a small tube with a glass, which is attached to the helmet only in front of the right eye.

In DCS World, you can choose whether the outline of the monocle should be visible or not. In the case of the first option, it does not look very realistic on traditional monitors, according to Apache pilots. When flying in a real helicopter, you forget about the monocle - the eye focuses only on the displayed information. You can disable this effect, especially when learning to fly - its absence helps in focusing a bit more on what is important. This is completely different when using VR goggles. There, the monocle effect is much more realistic and immersive - it is definitely worth keeping it. However, the HUD rendering effect for the right eye only can be tiring. It is much more convenient to set Render Both Eyes. It may not be that realistic, but your eyes will be much less tired - although, of course, this can be very subjective. 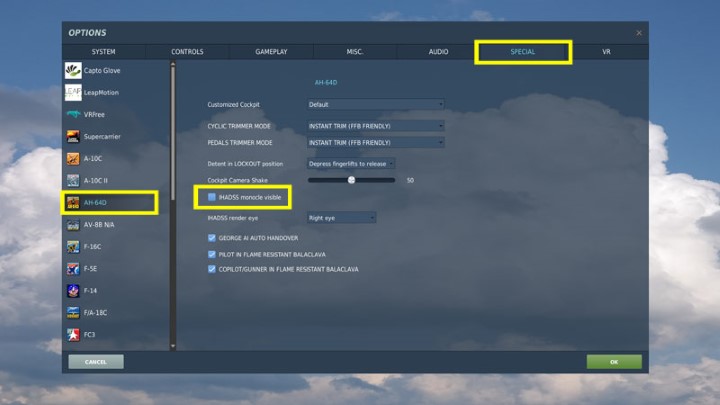 The monocle options can be found in the Settings and the SPECIAL tab for the AH-64D. IHADSS monocle reticle - enable/disable the monocle outline IHADSS render eye - select the eye for the HUD (left, right, both) 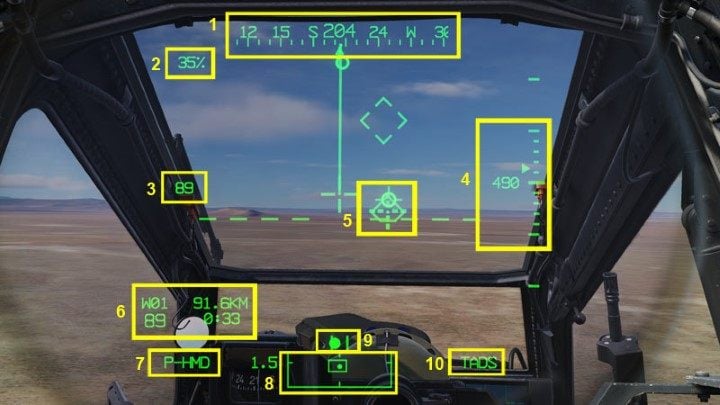 The HUD may contain different information depending on the selected mode and weapon. They are described in more detail on other pages. In general, you always see various basic information:

The HOCAS kit, i.e. Hands On Collective and Stick, is used to operate the helicopter systems. The "stick" is also called differently - it's "cyclic". Cyclic controls position of the rotor mast and works similarly as when piloting a jet. In DCS World, assign its PITCH and ROLL axes to your joystick.

Collective, on the other hand, regulates the angle of the rotor blades, so that the helicopter can go up or down. Assign COLLECTIVE, not Throttle, to your throttle lever.

Both Cyclic and Collective have various buttons, providing quick settings of various flight systems and weapons. It is worth noting that Collective has the shape of a stick, but it is mounted horizontally - in this position, some buttons are hidden underneath.

Based on the diagrams and description in the guide, it is worth setting the most important buttons on your joystick/throttle - regardless of the model you have. These buttons are marked "important" - their complete list is at the bottom of the page. 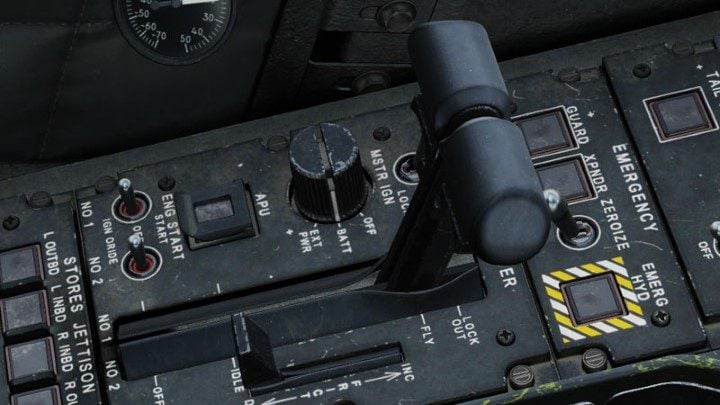 The third element is the Power Lever for the engine, which is the equivalent of the throttle in airplanes. In helicopters, it is only moved to the FLY position before take-off. It absolutely must not be moved during the flight, unless it is a serious emergency. It is also not worth assigning it to the throttle, the default keyboard keys will suffice here. 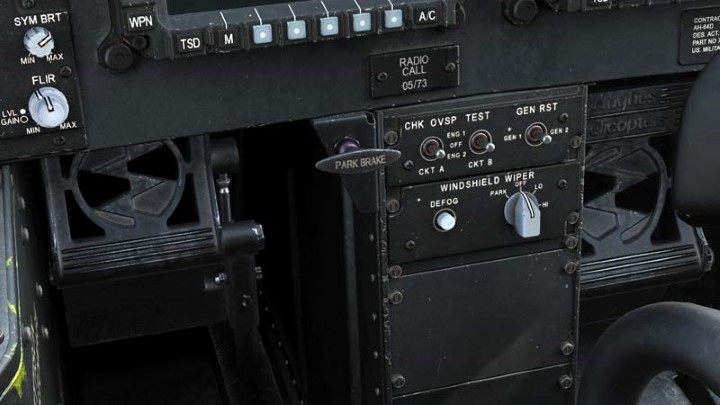 Last, but equally as important as Cyclic and Collective, are the RUDDER PEDALS. They play a key role while flying a helicopter - they are necessary to counter the operation of the rear propeller. While in the case of airplanes, you could still use the buttons to operate the rudder, a helicopter will require an analog axis - if you don't have dedicated pedals, then you should at least have a twist handle.

The description below does not cover the TADS. It has a separate page. All functions described below apply mainly to the pilot's seat. 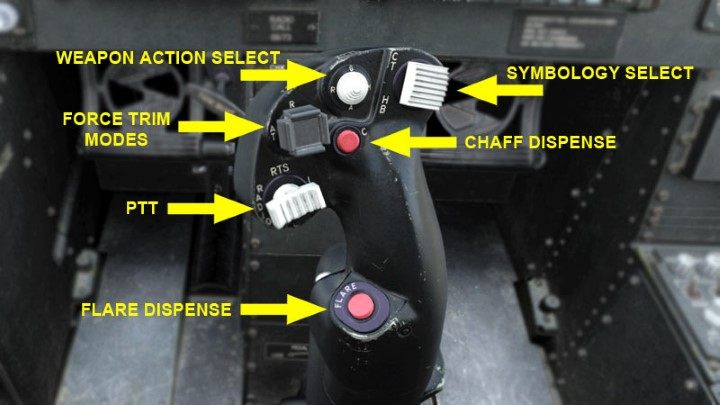 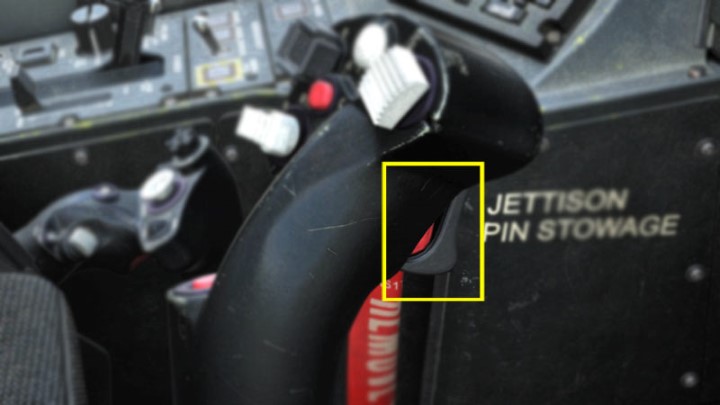 Note: In the AH-64D Apache, the stick has a TRIGGER GUARD cover. In the current version of the game, it is closed by default - you cannot use any weapons until you click the button to raise the cover! In the control options, find the TRIGGER GUARD OPEN/CLOSE function and assign a button to it. Just click it once before the mission and the trigger will always be available. 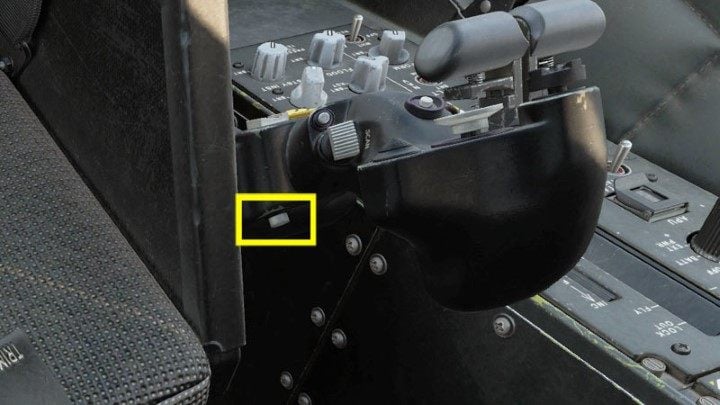 The AH-64D Apache also has buttons on the underside of the Collective lever, which cannot be shown here with DCS cameras. One of them is especially important and it is worth assigning it somewhere on the stick/throttle:

The most important axes and buttons to assign

In the current version, without the FCR radar, the most important buttons for assigning cyclic, collective and rudder pedals are:

This site is not associated with and/or endorsed by the Eagle Dynamics or Eagle Dynamics. All logos and images are copyrighted by their respective owners.