On this page of the DCS AH-64D Apache simulator guide, we have included basic information about the history of the Apache helicopter - its design and use in armed conflicts around the world. We also discuss the mechanics and systems that have been reproduced in the DCS World simulator. 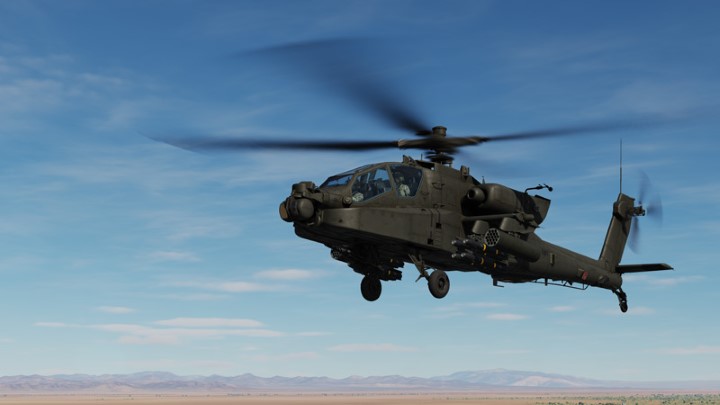 The AH-64D Apache is a twin-engine, two-seat American assault helicopter designed to combat enemy armored forces and for close support missions. It was developed in 1975 by the Hughes Aircraft Company, winning the tender for the AAH - Advanced Attack Helicopter project. However, it enter production in 1982. Two years later, Hughes was bought by McDonell-Douglas. In turn, that company was acquired by Boeing in 1996. Its main competitor was the YH-63 prototype by Bell.

Apache became part of the U.S. Armed Forces in April 1986. An improved version of the AH-64D was created in 1997. Approximately 2,400 units have been produced so far. In addition to the United States, which is its main operator, Apache is also used by the United Kingdom, the Netherlands, Greece, Israel and Egypt. 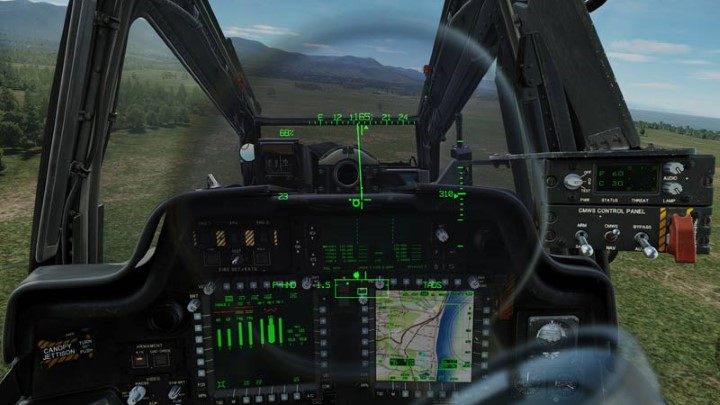 Apache is considered to be the most advanced attack helicopter in the world (namely its latest version - AH-64E v6). It was constructed in such a way as to be as resistant to projectiles and possible emergency landings as possible. The crew is placed in a Kevlar "tub" with an armored bulkhead between the crew members. The helicopter's entire armor weighs over a ton. The landing gear is deliberately not retractable - if the machine needs a "hard" landing, it cushions the fall. Most of the systems are duplicated, which allows them to operate smoothly in the event of a failure. The two engines are located at the top. Thanks to this, the "wings" with pylons for weapons protect them slightly against the fire from the ground. They let Apache go over 300 km/h, that is about 166 knots.

The Apache's two-man crew consists of a pilot and CP/G - short for co-pilot/gunner, i.e. a weapons operator who can also pilot the machine. While both operators can fulfill both roles, the main pilot's seat is in the rear and the CP/G is in the front, where they have more tools and information for their tasks. 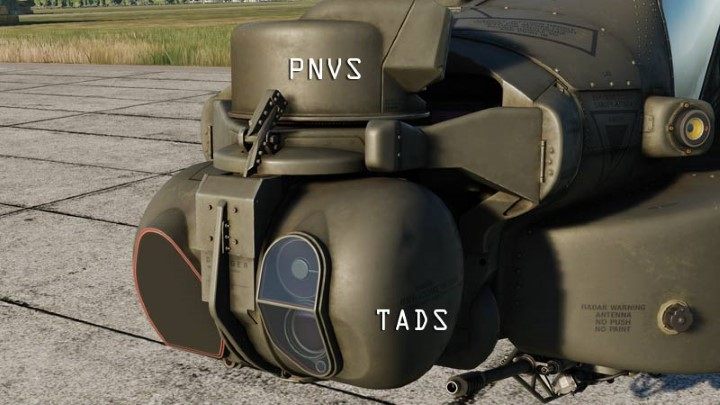 The eyes of Apache is the TADS system - Target Acquisition and Designation Sight. It is a targeting pod integrated with the structure of the helicopter (unlike the attachable Litening II or the Sniper for aircraft). TADS consists of electro-optical sensors, i.e. a TV camera (monochrome), an infrared IR camera, a laser pointer and a laser rangefinder.

In the same block, at the bow, there is PNVS - Pilot Night Vision System.

The TADS can be connected with the helmet, allowing the sensors to automatically target the spot where the pilot or CPG is currently looking. The range of view is 120 degrees sideways, 30 degrees up and 80 degrees down. PNVS has a slightly smaller range of motion.

TADS can only be operated by a co-pilot/gunner (CP/G). It is accessed via TEDAC (TADS Electronic Display and Controls) - a special dedicated monitor in the front part of the cockpit, with special handles with a multitude of switches for operation. 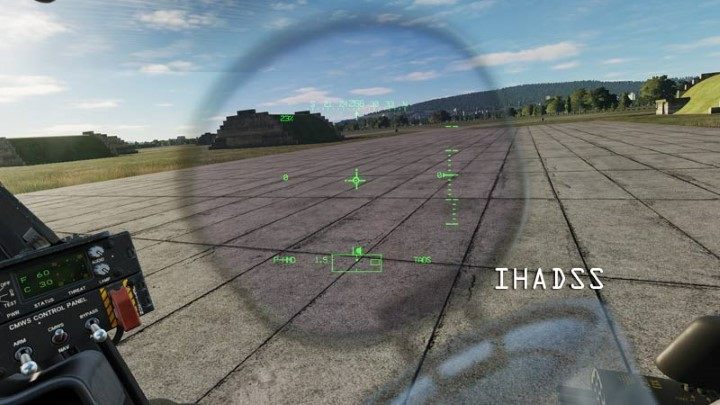 The IHADSS - Integrated Helmet and Display Sighting System - was revolutionary in its time. It is a helmet-mounted sight in the form of a monocle eyepiece that slides over the eye. It not only displays information from the HUD, but is also integrated with weapons systems. It allows, among others, to fire the M230 cannon where the pilot or the CPG is currently looking at. 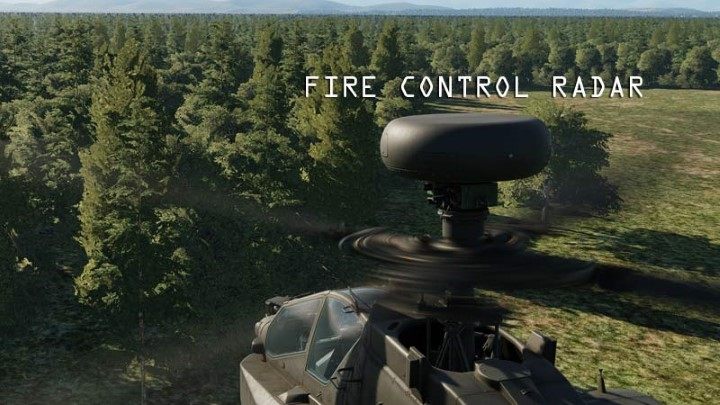 The huge dome above the rotor of some Apaches is the AN/APG-78 radar created by Longbow LLC - the combined effort of Northop Grumman and Lockheed Martin. This placement of the radar allows the crew to detect targets while remaining hidden behind natural terrain obstacles - the helicopter observes the battlefield while remaining invisible.

The radar can track up to 128 (or 156?) targets simultaneously and attack 16 of them. FCR can operate in the following modes: Ground Target Mode (GTM), Air Search, or Terrain Avoidance (TA).

The improved version of the radar in the newest AH-64E is called Guardian. The radar is necessary for using the L version (radar-guided) of Hellfire AGM-114 air-to-ground missiles. The AN/APG-78 is not standard Apache equipment - only one or two helicopters from a given squadron usually have a heavy, range-reducing radar dome and then send data to other helicopters via the Longbow system.

Longbow is, as mentioned above, the name of the company producing the AN/APG-78 radar and, in part, the name of this device, referred to in the company's catalog as Longbow FCR. More precisely, "Longbow" is first and foremost the name of an internal network system for exchanging data on the battlefield - a kind of tactical internet - to which information is transferred via the AN/APG-78 radar. With a FCR radar, crews can locate, identify and prioritize targets very quickly, and thanks to the Longbow system, they are simultaneously visible to all participants in the battle. 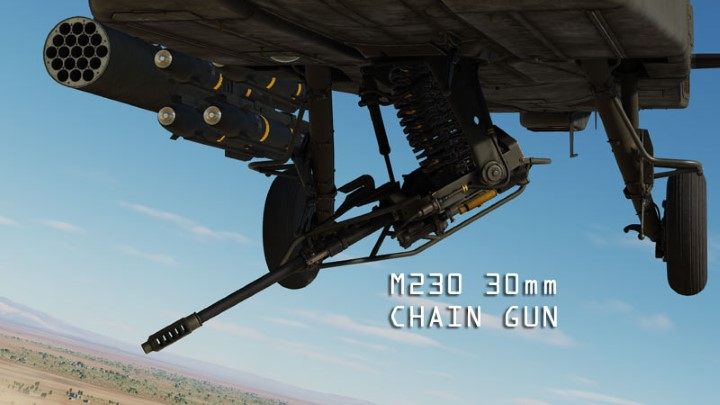 The M230 30mm chain gun is integrated into the helicopter's structure. It can shoot from a fixed position in front of the machine or it can be used together with automatic aiming coupled with the TADS and the IHADSS helmet sight. It then runs in the "look and kill" system. It can tilt 86 degrees side to side and 60 degrees down. This is an AWS - Area Weapon System - that is, an area weapon (not precise), covering a piece of land with bullets. Standard efficiency is about 3 out of 10 shells hitting the target.

The chain gun is designed to destroy "soft" or lightly armored targets. It has an effective range of 1,500-1,700 meters (maximum 4,200m) and a rate of fire of approx. 625 rounds per minute. The ammunition stock is 1,200 rounds. In the cockpit, you can set the number of bullets fired in short bursts. 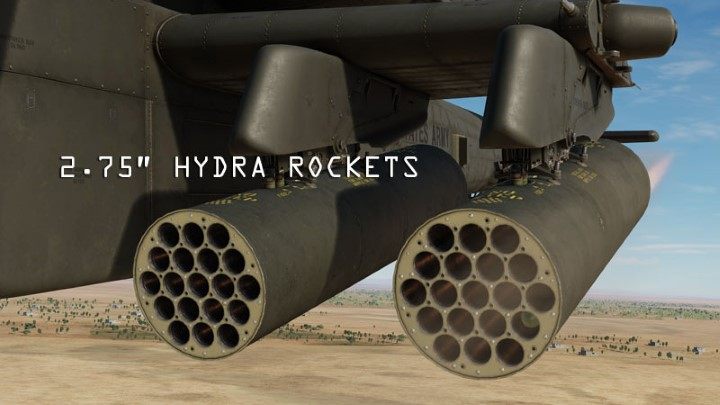 Four M261 containers can hold 19 Hydra 70 unguided rockets each with a HE (High Explosive), smoke or light charge. There are also anti-personnel variants with a "flechette" load (something like a shotgun full of nails) and the no longer used MPSM (Multi-Purpose Sub Munition) with cluster charges. Pylons with rockets can be tilted to a certain angle to carry out an attack without having to reduce the ceiling. Targeting is mainly done by the IHADSS system. 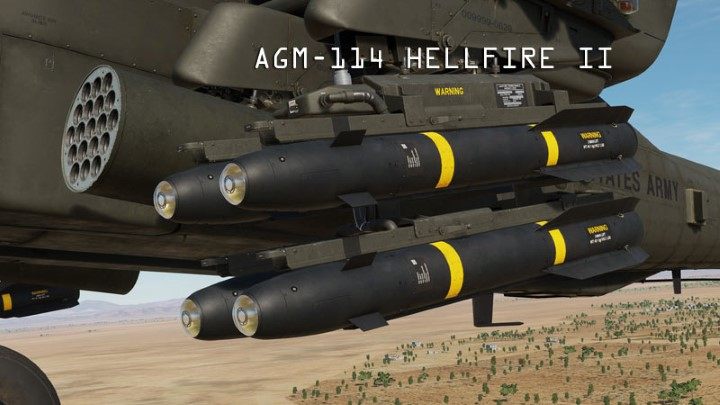 The main weapons of the AH-64D Apache are the AGM-114 Hellfire II air-to-ground missiles with a range of up to 8 kilometers (around 5 miles). In the K version, they are guided by a laser beam from the TADS system or another source, e.g. the Litening container from an airplane or a JTAC unit. The L version is a "shoot and forget" type of missile with an active radar - but it requires the presence of a helicopter with FCR radar. Hellfire is the most effective weapon against tanks and other armored targets, but it can be used in other situations, e.g. for destroying buildings. 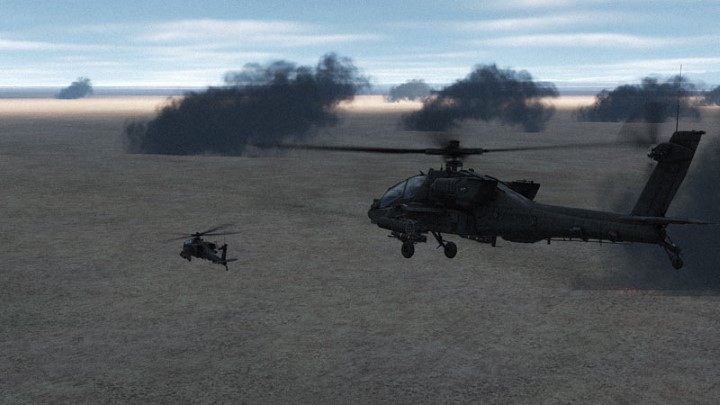 AH-64 Apache helicopters play a key role in CAS missions or CCA (Close Combat Attack). They very often operate together with A-10C and AV-8B Harrier as platforms that detect and mark targets for the Air Force to spare their own ammunition for emergency situations. By being able to hover in the air, they can observe the terrain more closely and pick out individual targets.

The following features and systems are available in the Early Access edition:

The final version will also add:

This site is not associated with and/or endorsed by the Eagle Dynamics or Eagle Dynamics. All logos and images are copyrighted by their respective owners.