One of the two activities that you can take part in an Adventure Mode are The Nephalem Rifts. They are simply, randomized dungeon systems that consist of random areas and monsters. To complete a Rift, you will need to annihilate every hostile creature and defeat the Guard in the final boss-fight.

A Rift can be activated in any encampment by clicking on Nephalem Obelisk in it. Opening the Rift is completely free and doesn't require any additional items or keys. The dungeon stays open until all players leave. The portal can be closed after killing the Guardian and talking to Orek in town. It's good to remember about the last activity because it's the conversation which provides you with task completion and with quite a lot of experience points. 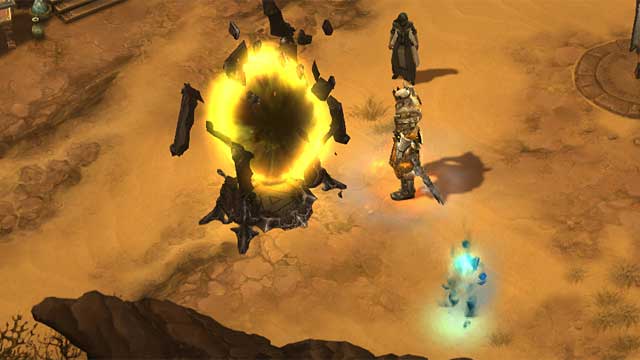 A Rift has been opened - the blue spiritual being nearby is Orek.

The dungeon consists of several levels, usually there are five or six of them. Its size depends on the quantity of monsters inside of it. It can happen, that the Rift will be made of only one location and instead of the stairs, leading to the next level, you will find an obelisk that will teleport you right to the point of exit. It means that this area is inhabited by the amount of monsters which is enough for summoning the Guard. So, whether you want it or not, you will have to explore undiscovered parts of the map and kill found enemies. 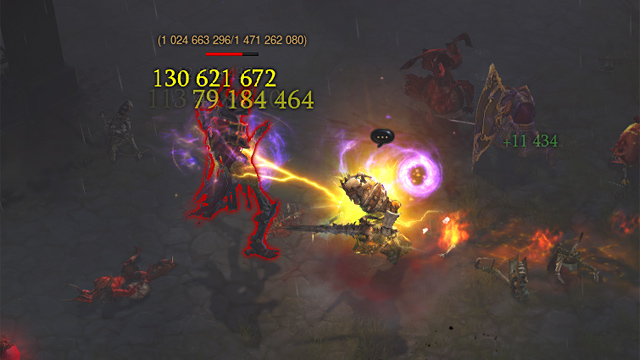 A Rift Guardian won't stand a chance against such a damage.

The Rift challenges are made easier by implementing new environmental objects, Pylons. They are somewhat different from the standard ones. Their bonuses are staggering, but they do not last long - you can use them only for several seconds, so use them smart. For the sake of example, Conduit Pylon can be very useful when used before the final fight. 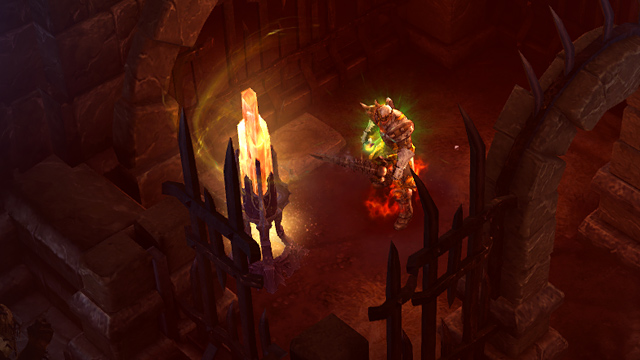 A new type of shrines in Nephalem Rifts.

Before you meet the Guardian, you have to kill a certain number of basic monsters (regular ones as well as elite ones). The progress bar can be seen on the right side of the screen - when it's full, a boss will invade the current location. Killing it guarantees you only regular rewards (items); experience for completing the task can be obtained after talking to Orek.

Among rewards dropping from Guardians of Nephalem Rifts you can find: gems (marquise and imperial), basic materials (the only legendary material can be Forgotten Soul), magic weapon, blood shards, plans and gold. There is also a chance of looting a special Key that will give you access to Greater Rift! 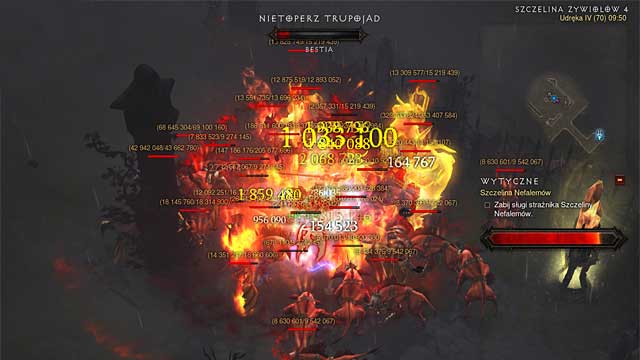 Such battles in Nephalem Rifts are nothing spectacular.

Clearing the Nephalem Rifts is a time consuming process, but it is also worth-doing, as in this mode, the Reaper of Souls noticeably increases the chance of getting the legendary items - that is implying, the player plays on the Torment difficulty level. 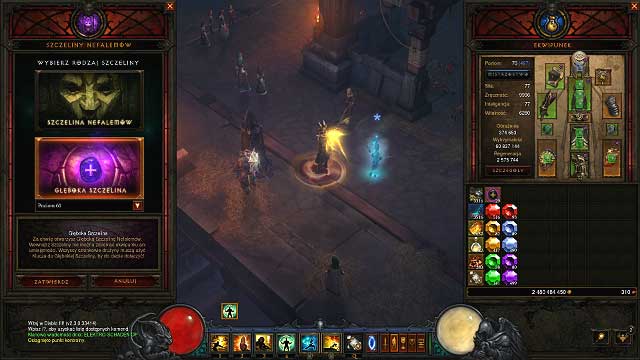 To open a Greater Rift, you just have to select this option in Nephalem Obelisk. It costs you one key to enter a rift every time. You can obtain the key by killing a Guardian in a regular rift. In the rift menu, you can choose to difficulty level. As you progress in the game and complete higher levels of rifts, the list will get longer.

Monsters in the Greater Rift are much stronger than regular mobs and they don't drop anything while elite monsters drop only progress globes - you should pick them up to fill up your progress bar. When you complete the whole bar, it's time for a standard fight with Rift Guardian. 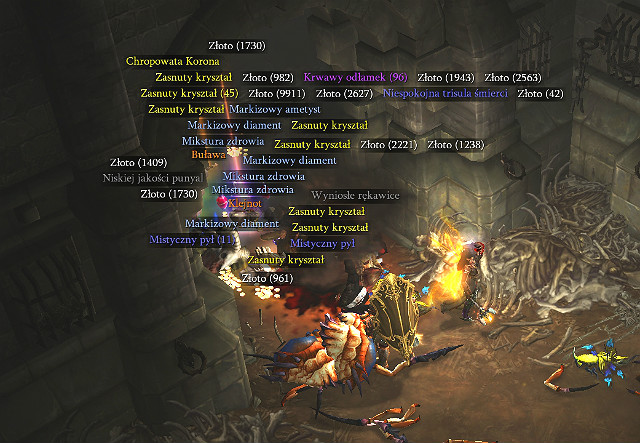 A drop after killing a Greater Rift Guardian.

The reward for defeating the Greater Rift Guardian is however greater than for defeating an equivalent guardian in a regular Nephalem Rift. You can really often find there legendary items and special gems which have a particular effect when you put them in jewelry. Beyond getting a drop, you will also be enabled to meet a new NPC - Urshi. The ghost, as a reward for your bravery, can upgrade the Gem that you've just obtained. 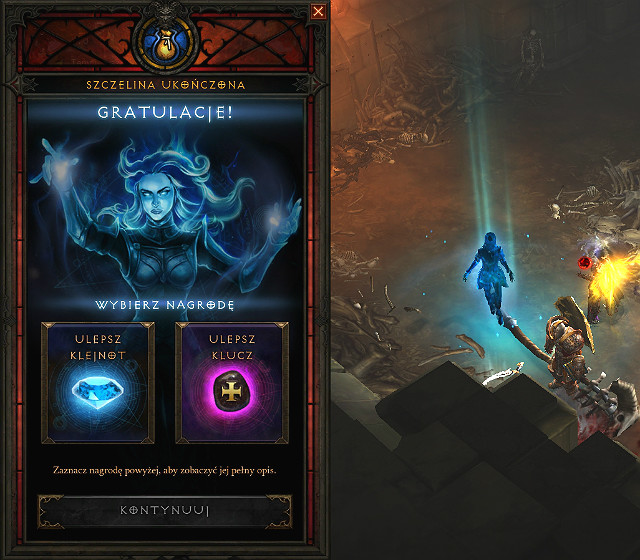 The reward for completing a Greater Rift.

In return for your courage and prowess, this ghost will do for you one of two special things. She may upgrade the Gem you've just found or upgrade the Greater Rift Keystone used earlier. By upgrading the Gem you will improve its properties so it's the best option. Gems rank 25 get an additional attribute so it's worth upgrading them. There are quite many gems - 13 - and each of them has its unique attributes which will certainly match with your character's build. 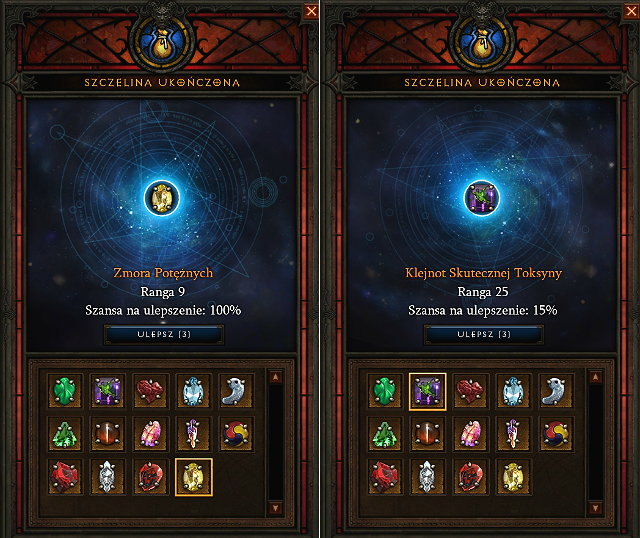 A comparison between leveling gems at different ranks.

If you decide to upgrade the gem, you will get three chances in order to do it. The success depends on two factors: current gem rank and greater rift rank you've managed to accomplish. The higher the level of Greater Rif is and the smaller the gem rank is, the more chances you've got to improve the gem. The exact correlation is presented in the table below. The first column contains the difference between rift level and gem rank. The other one - chance of improvement in percentage.

Having successfully completed the Greater Rift, you should go to town and talk to Orek who will reward you with a huge number of experience points and with gold.