Jobs are one of the two basic activities in the Adventure After selecting Adventure Mode and starting your playthrough, the game will randomly select 5 tasks for each act, giving you a total of 25 missions. You can freely use the portals in the town, to teleport to the selected area, which is possible thanks to the modified world map. The diagram also allows you to teleport to another player, for several seconds. You simply need to click the icon that represents them, on the map. 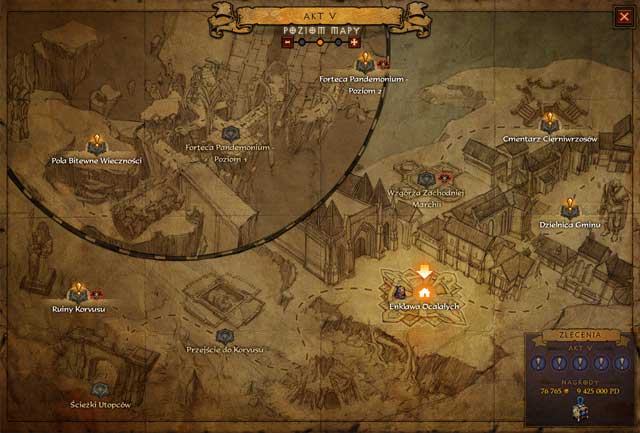 Two acts, of the five, always provide additional bonuses. This means that, for completing missions in these acts, you receive a doubled number of Blood Shards- the currency that you can spend to buy randomly generated items at Kadala's camp (a new NPC merchant who can be found in every town). 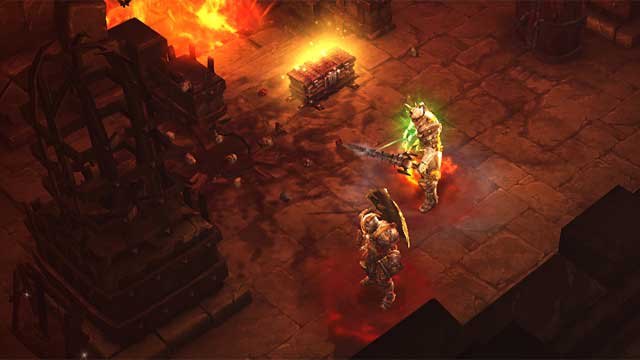 The game generates several types of jobs, which can be divided into the following types:

Apart from the high number of experience points and a bit more modest reward in gold, completing of jobs lets you obtain Blood shards - a form of currency which is available only in the Reaper of Souls expansion pack. You use it to buy items from Kadala (the merchant in the camp). The amount of shards that you are charged for each item varies, depending on the type of weaponry/armor that you are using however, you cannot be sure, what you will get into your inventory, as a result. What you receive, at random, are only magic items, yellow (rare) in the majority of cases, blue, a bit less frequently and orange (very rare, legendary).

You receive an additional reward after you have completed all five jobs in the given Act. It is the Treasure of Horadrims, which you receive from Tyrael after you return to the city (note! - here, you need to talk to him, before you leave the game, or else the valuable reward is gone for good). The chest contains several items - crafting materials, keys for Nephalem Rif, additional Blood Shards and, or course, magical weapons .

There is a low probability that the Treasures of Horadrim drop legendary items. Legendary items found in Horadric Cache are exclusive to act, you can't acquire them from any other source. It's worth noting, that completing tasks on the highest difficulty level - Torment VI - you have a 100% chance to get a legendary item out of a Horadric Cache

Completing jobs is time consuming so, the smarter players had the idea to split the responsibilities among themselves. Each participant of the game performs one of the jobs on their own and then, together (or not) they complete the fifth one. The name for this process is split farming.

The game is much more difficult, in this form, but also more profitable . A well-harmonized party is capable of obtaining the Treasures of Horadrimms faster and, at the same time, max out on their chances for rewards, legendary items predominantly.

Legendary items from the Treasures of Horadrims

Below, you can find a list of all of the legendary items, which you can find only in the Treasures of Horadrims. Under the original name of the weapon, there also is a bit of information on which Act it is available in. The only exception is Act IV, where there is a chance that all of the below items drop.

Note! The numerical and percentage values, in the below descriptions, are for the 9 April 2014. There is a chance that they are changed a little, in the future versions of the game.