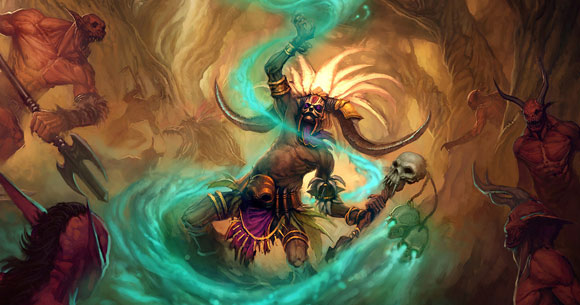 Witch Doctor is the equivalent of a necromancer, who can summon and command various undead creatures and demons to fight by his side. That is why a Witch Doctor with literally dozens of creatures swarming around him is a pretty common sight. What is more, those spiritual warriors have some of the most potent poisons at their disposal. Witch Doctors can also control their foe's behavior, by restricting their movements, or even seizing control over them.

This build focuses mainly on dealing huge AoE damage in a short period. The following combination of skills will allow you to quickly clear rifts and complete quests. To make this build work properly, you will need the Helltooth Harness set, which will allow you to deal more damage and reduce the damage that you receive. Bastions of Will set is very important for this build. Choose any amulet that you like. Thanks to Belt of Transcendence, you will be able to summon extra Fetishes for free. Jeram's Bracers will increase the damage deal by Death Wall. The most important item in your equipment is the weapon - Suwong Diviner, without which it would be difficult for you to use Acid Cloud effectively. 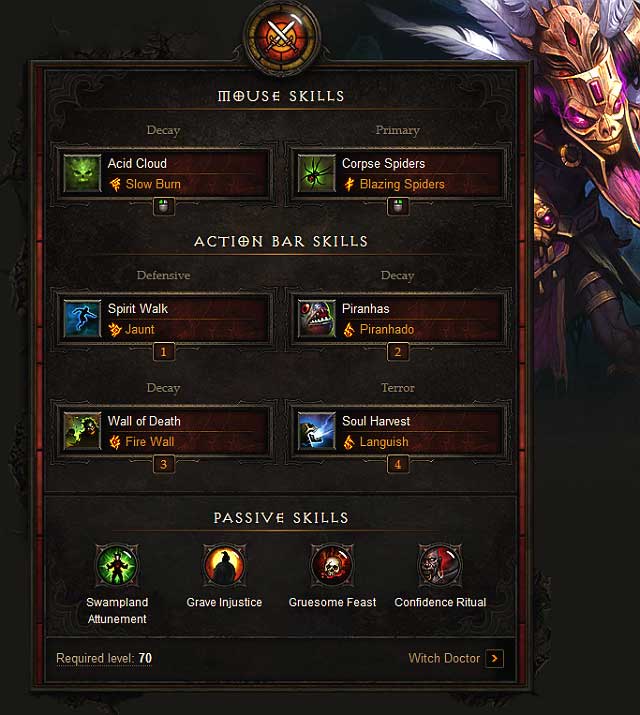 This skill will allow you to deal a lot of AoE damage over time. Moreover, you can stack the skill in one place to increase the damage dealt to mobs.

Corpse Spiders not only deal damage, but also regenerate your hero's mana.

Using Spirit Walk, you can leave your body and enter the spirit realm for 2 seconds. When you're there, you can move freely, which increases the hero's mobility. Thanks to the Jaunt rune, you can stay in this form longer.

Piranhas deal a lot of damage and also put a debuff on your enemies, which increases the damage they receive by 15%. Using the Piranhado rune, you can create a spinning tornado that lasts 4 seconds and pulls your enemies into it.

Wall of Death deals a huge amount of damage to targets in its range of attack. Using this skill the proper way will require a lot of practice, but when you learn to position it well, your enemies will start disappearing.

This skill gives you a large bonus to your endurance.

A great skill that regenerates 1% of your total hp and mana every time an enemy dies within 20 meters from you. Moreover, the cooldown of all the skills is reduced by 1 second. It will make you last much longer on the battlefield.

When collecting health orbs, you will get an extra intelligence buff.

It will increase the amount of damage that you deal to enemies within 20 meters from you.