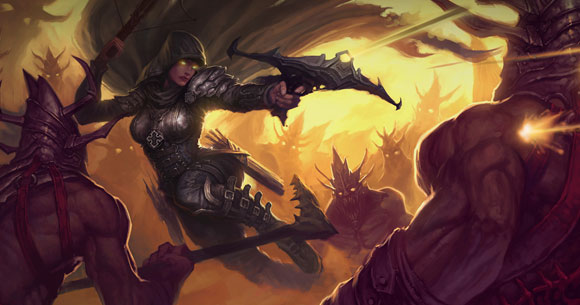 Demon Hunter specializes in ranged combat. Using her reliable bows and crossbows, dancing between groups of enemies, who are unable to lay a finger on her. The key aspect of playing this character is to plan your actions beforehand, because, despite dealing huge amounts of damage, Demon Hunter is the most fragile character in the game. One wrong move and you will be biting the dust.

This build works well if you want to deal AoE damage, which makes farming fast and effective. To use this build properly, you will need all the elements of the Unhallowed Essence set. This will make your Hatred generators provide Discipline as well. Moreover, you will increase the amount of damage you deal and reduce the damage you get. Another important thing is the Bastions of Will set. You can choose the amulet by yourself, but look for the statistic that gives +% fire damage. Wear Will of the Light, Hunter's Wrath on your belt, Dead Man's Legacy as your quiver and Yang's Recurve. 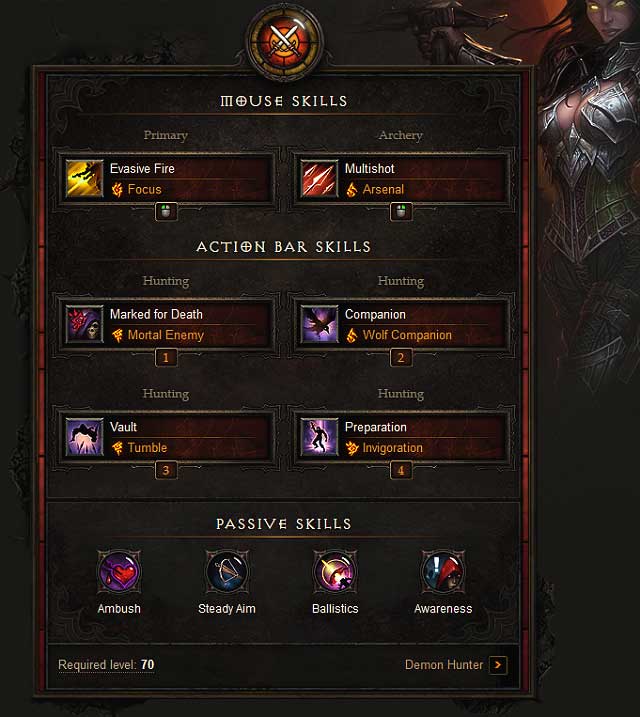 Evasive Fire deals quite a lot of damage, but the most important thing is the regeneration of Hatred obtained from the Surge rune.

Multishot is your basic skill for dealing a huge amount of damage. Using the Arsenal rune, you will be able to shoot additional missiles at closest enemies.

This skill triggers automatically as you attack your enemies. It is possible thanks to Calamity from Kanai's Cube. Using Mortal Enemy rune, you will increase your Hatred regeneration.

Choose Wolf as your companion, because then you will be able to increase the damage dealt by you and your enemies by 30% for 10 seconds!

Vault is the only skill that can help you get out of a difficult situation, so it is good to have it. Using the Tumble rune, you will be able to use Odskos again after 6 seconds for 50% of the normal discipline cost.

Preparation will give you the possibility of regaining discipline points and thanks to the Invigoration rune, you will increase this statistic by 15 points permanently.

Our hero will mainly deal damage by shooting rockets and the Ballistics skill increases the damage dealt by rockets by 100%! Therefore, the choice of this ability is obvious.

You will be able to deal 40% more damage to targets that have more than 75% hp.

When attacking targets from at least 10 meters, you will deal 20% more damage.

This build focuses on dealing a huge amount of damage, but not on survival abilities. Because of this, it may so happen that you will get in some serious trouble. Thanks to Awareness, you can save yourself even from a critical situation, because when your hp comes to 0, instead of dying, you disappear for 2 seconds and regenerate 50% of your hp.