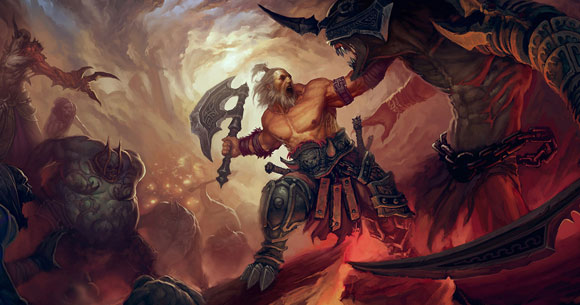 The Barbarian is a typical adventurer - he jumps in the middle of the fight, hacking and slashing everything and everyone who dares to come close to him. While playing the Barbarian, you will constantly balance between life and death, because you will have to fight in close combat and that means that you will be constantly attacked. Do not worry, however, as Barbarians (like Monks and Crusaders) receive 30% less damage than Wizards, Witch Doctors and Demon Hunters.

This build is focused on using Whirlwind and puts a lot of emphasis on mobility. Using Whirlwind, you will be able to deal AoE damage and move through crowds of enemies freely. To make the build work properly, you will need the Wrath of the Wastes set (it will enhance the effect of Whirlwind). Moreover, you will need two weapons from the Bul-Kathos's Oath set. Wear the Bastions of Will set on your fingers. You can choose the amulet by yourself, but it is recommended that you wear one with a bonus to physical damage. Lastly, you should have Chilanik's Chain and Lacuni Prowlers. 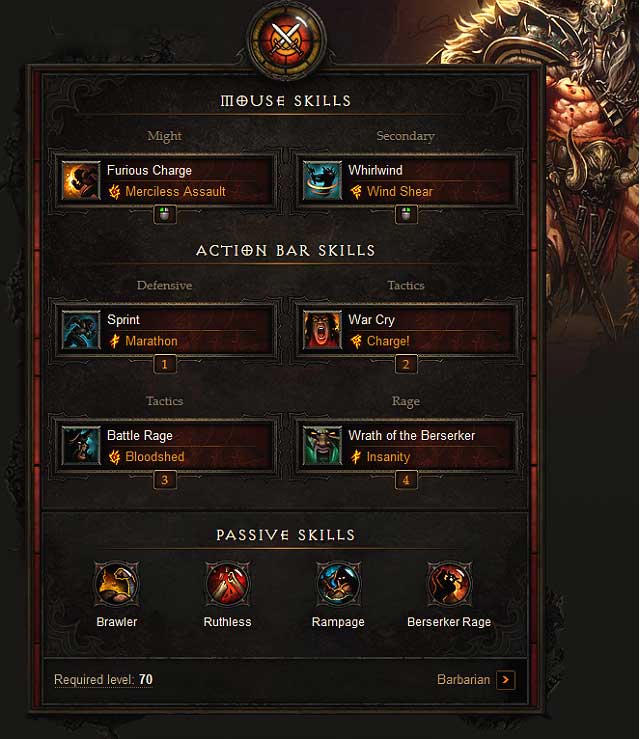 Furious Charge is a good source of damage and a very nice movement skill. The hero charges and knocks back nearby enemies dealing 600% weapon damage. Thanks to the Merciless Assault rune, you can reduce the cooldown of this skill.

Whirlwind is your basic source of damage. Your hero will spin around and deal damage to all the enemies on his way. Thanks to this skill, you can move through a crowd of enemies with no trouble.

Mobility is very important in this build and using Sprint, you will be able to increase the speed with which your hero travels across the map.

Armor is an important statistic for melee fighters. War Cry will increase your hero's armor level by 20%. Thanks to that, it will be easier for you to survive the fights on higher levels of difficulty. Moreover, using the Charge! rune, you will increase Fury regeneration.

Battle Rage will increase the damage dealt by your hero and will also cause a blood explosion when a critical hit occurs. This explosion deals 20% of damage to all the nearby enemies.

4. Wrath of the Berserker + Insanity

Wrath of the Berserker is a powerful buff for a Barbarian. After activating this skill, your hero will be enraged for 20 seconds and it will increase statistics like: critical it chance, dodge chance, attack speed, movement speed. Thanks to the Insanity rune, you will also increase your damage by 50%.

Brawler works perfectly when in the middle of a fight. As long as you have at least 3 enemies around you, your damage is increased by 20%.

Thanks to Berserker Rage, you deal 25% more damage when your Fury level is close to maximum.

Your hero will deal additional 40% of damage to enemies that have less than 30% hp.

Rampage increases your strength by 1% for 8 seconds after killing an enemy or helping someone to kill an enemy. This effect can stack up to 25 times.

1. Bane of The Trapped

3. Obsidian Ring of the Zodiac