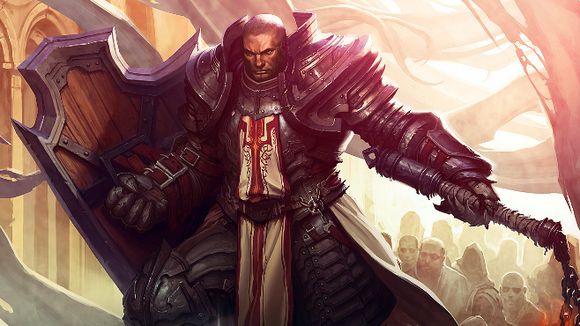 Crusaders are armored warriors, fighting in melee range on the frontlines. Their weapon of choice is a flail. They are especially proficient with shields, making them able to block most of enemy attacks directed at them. During combat Crusaders generate Wrath, which they use to attack their enemies with powerful abilities, or to summon holy powers.

The Hammerdin build, which was popular in Diablo 2. It focuses on dealing damage using Blessed Hammer, which has a large attack range and deals AoE damage. To make the build work properly, you will need the Seeker of the Light set, which will increase the hammer damage and you will also get a damage reduction after using Falling Sword. You should wear Unity and Convention of the Elements on your fingers (remember that your companion also has to wear Unity so that it works properly). Put on Gabriel's Vambraces and The Witching Hour. 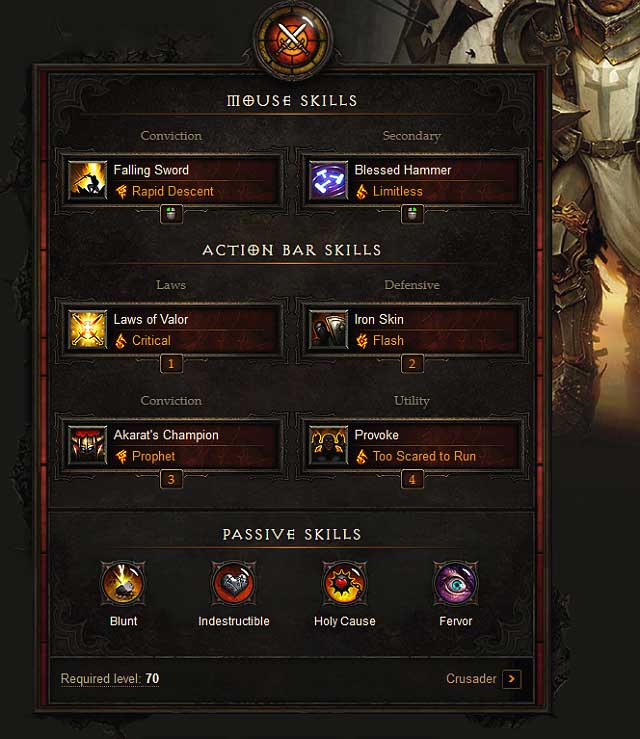 Thanks to Falling Sword, you will be able to jump between the enemies and deal a lot of damage. It is grate for starting a melee battle.

This is the most important skill in the build. After activating it, you create magic hammers that swirl around the character and each one of them deals damage when in contact with an enemy.

This buff works great when playing solo, as well as in multiplayer. You will always make use of a bonus to attack and critical damage.

A great defensive skill that will increase your endurance and your mobility by using the Flash rune.

After activating this skill, the whole power of the crusaders order enters your hero and increases his damage 35%, as well as increases Wrath regeneration by 5 points for 20 seconds. Moreover thanks to the Prophet rune, you get an armor bonus.

4. Provoke + Too Scared to Run

Provoke works well when fighting a large group of mobs. It makes the enemies attack your hero and you obtain Wrath every time an opponent hits you. Moreover, you will slow the mobs down, which will allow you to hit them multiple times using Blessed Hammer.

Thanks to this skill, you will escape death more than one time.

Increases the damage dealt by your weapon by 10%. Moreover, every time you deal Holy damage, you are healed 1% of your total hp. Considering that this build focuses on dealing Holy damage, this is the perfect choice.

You can reduce your cooldowns by sacrificing 15% of your attack speed.

3. Obsidian Ring of the Zodiac