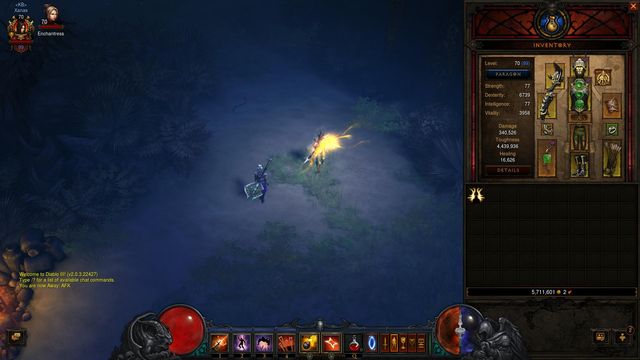 The system calculates 340 000 damage, but it does not include bonuses marked with the orange point

You often stumble across lots of trash, during battles, which are considered worse, after being compared automatically. This is not necessarily true, however. It is all about the orange diamonds in front of properties, which are placed in the items. Even on the loading screen, you can sometimes read that the properties of items, whose names are preceded with orange diamonds are not included in the damage, on the character card.

If you follow that reasoning, also while comparing items you need to take a closer look at the orange points. The math is simple here.

If the item that you examine is worse, when it comes to damage, e.g. by 1%, and it reads at the orange point that "damage from fire is higher by 15%" you need to calculate that, at the cost of 1% you receive 15% to all damage from fire. If it is the only kind of damage that you deal, then the worse weapon becomes better, automatically., even if it reads on the card that you deal less damage than you used to.

You need to remember that the damage on the card is the mean damage, which you can deal. Neither the highest, nor the lowest. What is also important is where the system gets these mean numbers from because, if your chances of a critical hit are low, so what that you have high damage on it, when your chance to land a hit is once per twenty swings. Mean chances are higher, but this does not mean that you will be dealing such damage each time you swing the weapon. In spite of that, you need to enter the details tab yourself and consider what you still need, and what you do not. In such cases, you can see the Bard, who will replace, for you, the specific property with another one, which you deem more useful.

Additionally, if you do not an option in a, theoretically, better item, you should make sure that the bard can replace that property with something more interesting. To do that, see her and check out what she has to offer, by clicking the question mark next to the property.

What is also important is that it is not only the abilities that deal damage from elements. Also weapons can deal damage, e.g. from poison. So, if you have such a weapon and additionally, it deals higher damage from fire, it is a good idea to replace damage from poison with the other type.

IF you want to test a new piece of equipment, it is good idea to take on a boss on your own (best the Ghnome in Act III) at the Master level, find out how fast you can deal with him, save the results, replace the items and go to the boss again. If you manage then, to kill the boss faster, this means that. Of course, this is not the perfect method, but it works.