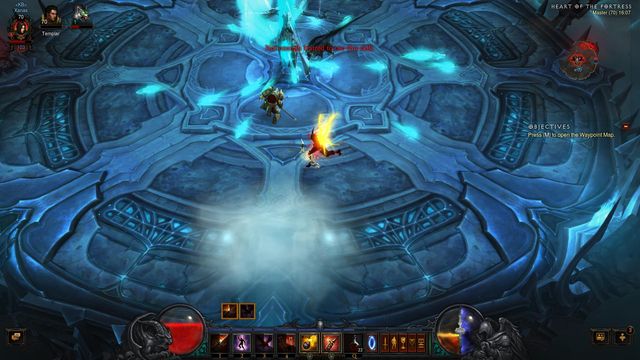 Malthael is the last foe you will encounter in your journey throughout the V Act. He's a strong and mobile enemy, who can be cause some problems on some of the higher difficulty levels - especially if you are fighting him for the first time. The whole encounter with Malthael is divided into three phases, and in each of them the enemy will act differently.

Phase one - From time to time, Malthael will stand in the centre of the arena to send a torrent of souls in every direction. The souls are travelling relatively slowly, so it's easy to avoid them, and for the duration of this attack, the boss is susceptible to ranged attacks. Try to deal as much damage as you can, because the boss won't be able to retaliate. Additionally, during the whole phase one, fog of death will appear in various places on the arena, impeding movement.

Phase two - During the second phase, Malthael will summon some support units, in the form of Exorcists, who are quite durable and can be annoying, as they can teleport around the arena freely. It's worth to take them out first, before you continue to attack your primary target. During the second phase, Malthael will change his behavior, instead of standing in the centre of the arena to swarm you with souls, he sends skulls, which are first swirling on the edges of the arena, and after a while they are directed to the center. Try to stand on the edge of the map and avoid them when they are doing their first circle to the center, and you should come out of it without sustaining any damage.

Phase three - During the third phase, Malthael will create even more fog of death, and, from time to time, he will stand in the centre of the arena, sending beams of energy, circling with it around the arena - fortunately for you, he won't be able to cover the entire arena with that, and you will always be able to find a hiding place behind his back. You can be sure that by standing behind his back you won't be dealt any damage. As soon as you notice the enemy teleporting to the center of the arena, stand behind him - use this opportunity to deal some free damage.

Death Shroud - Malthael's basic attack. The enemy summons a circle of fog on the arena, which will deal damage and slow down any player standing on it. The fog moves slowly, when there is too much of it, but it may be problematic. Malthael uses this ability in the initial and the final phase of the battle. It is important that you do not walk into the fog and remain in the empty fragment of the arena.

Tormented Souls - In the middle phase of the battle, Malthael summons skulls on the edges of the map numerous skulls, which will then swirl in circles and move towards the center of the arena. After a while, the skulls fly back outside of the arena so, it is best to wait through this. When the enemy starts summoning them, the best method is to stand on the edge of the map and avoid them when they do the first circle.

Soul Sweep - Malthael appears in the middle of the arena and fires multiple souls into various directions, which deal medium damage and slightly knock up. It is best to summon an ally then, who will attack Malthael, while you will stand behind him. The souls are moving slowly, so you can easily avoid them and attack the enemy in between.

Drain Soul - Malthael surrounds himself with a barrier of souls, which deal damage if you are standing too close to the enemy, and reflects your ranged attacks. The duration of the ability is quite short so it's best to just wait it out.

Wings of Death - Instead of firing the souls, Malthael will stand in the centre of the arena and launches fireballs into random directions. After that, he shoots red beams of energy. The only safe place during this attack is the area behind the enemy's back. For the sake of safety, once you are behind his back, it is a good idea to move away towards the edge of the map.

Death Do Us Part - Kill Malthael.

Small Moments Like These - Kill Malthael in the co-op mode. This means that you need to kill her with any players, instead of solo.

Memento Mori - Kill Malthael at the highest level, without crowd controlling enemies, while playing at the Torment level, or higher. The skill that limit crowd control are that ones that, in one way or another, limit the opponent in their attacks, i.e. slowing, stunning, blinding, etc. The important thing is that it is you that this restriction concerns and not your friends. Even if they use them and you do not, you will get the achievement anyways.

Sudden Death - Kill Malthael at the highest level, within 3 minutes, while playing at the Torment level, or higher.

Cheating Death - Kill Malthael without getting hit with his Fog of Death, Drain Soul, Skull Spiral, Soul Nova or Soul Sweep. See above to learn more.

I am become Death- Kill Malthael at the highest level, without using the abilities that limit control, while playing at the Torment level, or higher, in the Hardcore mode. You can turn on the mode only while creating a new character. This means that, if the character dies once, it is erased immediately.

Defying Death - Kill Malthael at the highest level, within 3 minutes, while playing at the Torment level, or higher, in the hardcore mode. You can turn on the mode only while creating a new character. This means that, if the character dies once, it is erased immediately.