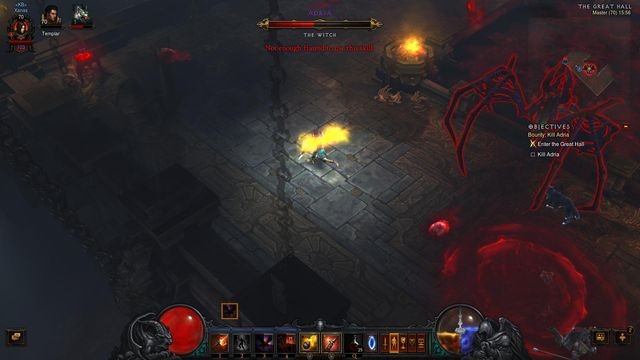 Adria is Diablo's servant, who is obsessed with freeing him from the stone of souls. Before the battle begins, Adria will show you her true form - a winged, spider-legged demon.

Single blows should do no damage to her but, she cannot be taken lightly. You need to attach the most attention to the larvae of her blood, which abound towards the end of the battle. Even if you take damage from one, you quickly need to leave the field of the puddle that appears there. During the encounter, you should move around the arena carefully, as her larvae will get under your feet constantly. Adria summons the larvae many times and apart from that, she also use the whirlwind and the ball of blood, attacks that need to be avoided like the plague.

Wing Slash - Adria performs a wing swing and deals damage to the characters in front of her. It is recommended that you hop back from that.

Whirlwind - Adria starts spinning, drills into the ground and appears next to the character of her choice. Deals medium damage.

Blood Ball- Adria charges the attack and places a ring of violet flames under your feet. The effect of this skill is the same as that of the Defiler, which some of the elite mobs have at their disposal.

Blood splash - Adria starts using this skill as soon as her health bar drops to a predetermined level. The larvae of blood appear then, and they start crawling into random directions. They do not attempt to approach any of the characters with premeditation so, you can avoid stepping on them. Whenever they touch to you, they explode, which deals low damage but, under your feet, there appears a pool of blood, which deals high damage, if you stand on it for too long.

I Knew You Were Trouble - Kill Adria.

Group therapy - Kill Adria in the co-op mode. This means that you need to kill her with any players, instead of solo.

Really, Most Sincerely Dead- Kill Adria at the highest level, without crowd controlling enemies, while playing at the Torment level, or higher. The skill that limit crowd control are that ones that, in one way or another, limit the opponent in their attacks, i.e. slowing, stunning, blinding, etc. The important thing is that it is you that this restriction concerns and not your friends. Even if they use them and you do not, you will get the achievement anyways.

A Witch in Time - Kill Adria at the maximum level, within 60 seconds, at the Torment level, or higher.

Move For Me - Kill Adria without being hit with her blood splash, blood ball or wing slash. To learn more, see above

Her? - at the maximum level, without crowd controlling enemies, at the Torment level, or higher, in the hardcore mode. The mode can be activated only when you create a new character. This means that if the character dies, it is erased immediately.

What the Hex? - Kill Adria at the maximum level, within 60 seconds, at the Torment level, or higher, in the hardcore mode. The mode can be activated only when you create a new character. This means that if the character dies, it is erased immediately.