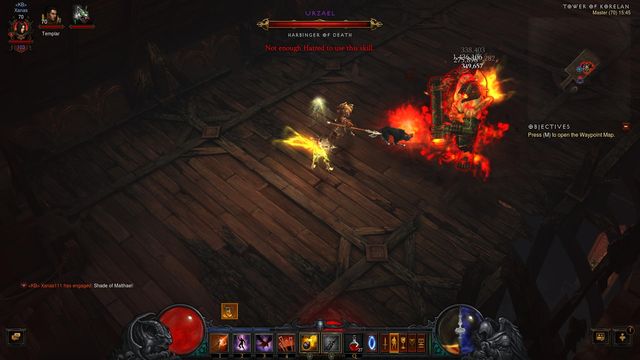 Urzael is Matael's pupil who, just like the master wants to destroy the whole essence of demons. She is armed with a projectile launcher with an in-built flame thrower. You can encounter him at the cathedral on the hills of the Western Marchia. Urzael is not the fastest and most intelligent foe you've encountered, but he can't be underestimated, as he has several abilities, which can easily end your life if you don't react in a proper way. The encounter focuses on avoiding his attacks, being his flamethrower, rocket jump and burning planks, falling from ceiling.

There are two phases to the battle:

In this phase, Urzael attacks with a cannonball and a jumping kick. She does not use her flame thrower, yet and the dropping planks are circular in shape. They also do not fall down that often and over the area as large as in the second phase.

After you've depleted about a third of the enemy's health, the enemy will stun you for a brief moment (just like Diablo does at the end of Act IV), after which he will set the whole floor of the cathedral ablaze. During this phase Urzael will attack more frequently, and he will start using his flamethrower ability. As soon as you notice him breathing fire in your direction, the best solution is to avoid the attack - get out of it's line of fire, or jump behind the enemy's back. The dropping planks are now rectangular in shape and they drop more often.

You need to remember that there are healing shrines at both sides of the arena. You can use them whenever you feel the need to.

Cannonball - Urzael fires the projectile towards your character. The cannonball moves slowly and it leaves a fire trail behind, which deals damage when someone gets in its line of fire. The projectile can be easily avoided, so it's better to do so, instead of taking the hit.

Flamethrower - after one dialogue during the battle, Urzael starts using the flamethrower, which fires flames at an angle of 45 degrees. You need to watch out for this attack and get back, as soon as Urzael starts firing, or get past him.

Leap attack- Urzael stands on his rocket like on a pogo stick and highlights to circles on the arena - the first one if the one from which the enemy will jump, and the second marks his landing place. You can stun the enemy as he starts preparing for this attack, which will interrupt the whole maneuver and the enemy won't be going anywhere.

Crumbling ceiling- Urzael lifts her cannon into the air and after a while, flaming planks start falling onto the arena. After a short while, numerous burning planks will start falling on the arena, which will deal damage to your character if they hit, or if you step into the burning area left after a plank. It is worth adding that this attack cannot be broken and even if you stun Urzael, the planks will drop anyways.

Set Fire to the Pain - Kill Urzael in co-op. This means that you need to kill her with any players, instead of solo.

Light it up - Kill Urzael at the highest level, without using any skills that limit crowd control, while playing at the Torment level, or higher. The skill that limit crowd control are that ones that, in one way or another, limit the opponent in their attacks, i.e. slowing, stunning, blinding, etc. The important thing is that it is you that this restriction concerns and not your friends. Even if they use them and you do not, you will get the achievement anyways.

Fanning the Flames - Kill Urzael at the maximum level, within 90 seconds, at the Torment level, or higher.

Boing, Clash, Boom- Kill Urzael without being hit with her leap attack, cannonball or the crumbling ceiling. To learn more, see above

Cinder, My Regards - Kill Urzael at the maximum level, without crowd controlling enemies, at the Torment level, or higher, in the hardcore mode. The mode can be activated only when you create a new character. This means that if the character dies, it is erased immediately.

Catching Fire- Kill Urzael at the maximum level, within 90 seconds, at the Torment level or higher in hardcore mode. The mode can be activated only when you create a new character. This means that if the character dies, it is erased immediately.