On this page of the Diablo 2 Resurrected guide you'll learn how to replenish ammo, where to find your ammo counter, and whether you can use weapons without ammo. The game allows you to wield different kinds of weaponry - including Ranged Weapons. Those include bows, crossbows, various kinds of javelins, throwing knives and axes. Ranged weapons have a limited ammo count - this doesn't apply to hired mercenaries, who'll never run out of ammo. 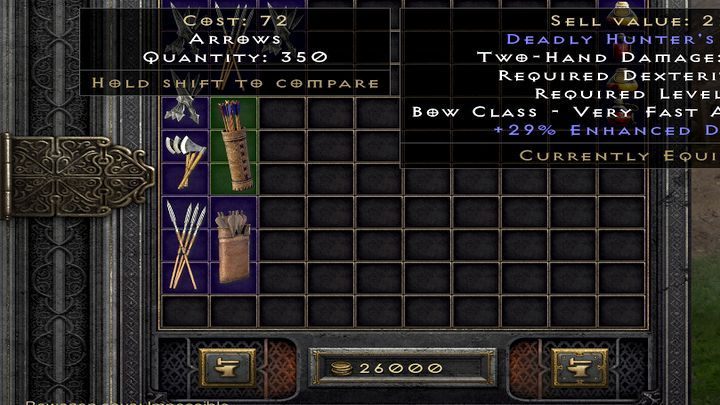 When your weapon runs out of ammo, you won't be able to use it. If the weapon can be used both in ranged and melee combat, you'll lose the possibility of using it in melee as well.

If you don't use skills, you'll be able to see your ammo count on the skill bar; you'll also receive a notification on the right side of the screen once your ammo runs low.

You can replenish bow and crossbow ammo by buying arrows (for bows) or bolts (for crossbows). To replenish ammo in other weapons:

It's worth it to have an extra weapon in the weapon swap panel in case you run out of ammo in the middle of combat. You won't be able to do much with only your fists.